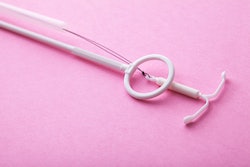 The IUD is an excellent birth control option, particularly if you don’t want to do something every day — they’re over 99% effective at preventing pregnancy, according to Planned Parenthood, and they last between three and 12 years. Most people don’t have any trouble after their body gets used to them, but if you wake up feeling like something's off — like, maybe your IUD moved — you might not know exactly what to look for. The signs that something's wrong with your IUD can include shifting strings, strange pain, abnormal bleeding, and more.

"Once [an IUD's] placed, it usually stays in that same place and doesn't usually wiggle around," Dr. Mary Jane Minkin M.D., a clinical professor in the Department of Obstetrics, Gynecology, and Reproductive Sciences at the Yale University School of Medicine, tells Bustle. "We usually recommend for folks to come back after we insert an IUD in about a month or so we can check to see the strings of the IUD."

If things feel "off" before that check-in, pay attention. "You shouldn't be in terrible pain," Dr. Minkin says. Some IUDs do end up getting displaced (moved from where it was placed to a different part of your uterus), embedded in the sides of your uterus, or even expelled. These outcomes are relatively rare, though: first-year expulsions happen between 2-10% of the time, according to a 2014 study in Obstetrics & Gynecology. Perforation of the uterus walls due to an embedded IUD is even rarer, says a 2022 study in The Lancet, occurring in 0.6% of IUDs in the first five years of use.

If you think your IUD might have moved, you'll definitely want to contact your gynecologist to check; in rare cases, displaced IUDs can puncture your uterus walls and mess with your internal organs. Dr. Minkin also says that an infection could be a concern, which is why it's important to see your provider as soon as you can.

Here are some clear signs that there's something wrong with your IUD.

1. Your Strings Are Longer Or Shorter Than Before

Your IUD has a string that makes it easy for you to get it taken out once your time together's up. Checking your IUD strings is super simple — with clean hands, put your index or middle finger up into your vagina until you get to your cervix. You should be able to feel them there.

"Your cervix sort of feels like your nose, so if you imagine that you had two threads against the tip of your nose, that's sort of what the IUD strings will feel like," Dr. Minkin says.

If you suddenly notice that your strings are longer than they were before, this is a sign that your IUD might have slipped down from where it was placed.

2. Or You Can't Feel Your Strings At All

Alternately, if you can’t find your strings, this could mean that your IUD has moved further up into your uterus. "The major thing that I would say that people should be concerned about [is] if, for example, they can't find their strings all of a sudden," Dr. Minkin says.

3. You Can Feel Your IUD In Your Cervix

Your IUD is supposed to be placed up inside your uterus. You shouldn't able to feel it. If you notice your IUD is coming out of your cervix or you feel the bottom of it in your cervix, that means it’s too low and might even be in the process of coming out completely. Feeling an IUD in your cervix could mean literally being able to feel it with your fingers as you do a string check, or it could mean your cervix is starting to feel uncomfortable because there's a piece of plastic or metal that shouldn't be there.

4. Your Partner Can Feel Your IUD

Sometimes you might not notice that there’s something off with your IUD, but your partner might feel the tip of it when you have sex. If your partner notices something hard coming out of your cervix, go check it out at the doctor to make sure it hasn’t slipped.

However, sex itself can't displace your IUD. The myth that a penis or sex toy can "knock" your IUD out of place is just that: a myth.

5. It Hurts When You Have Sex

Some people report that sex changes a bit after you get an IUD, with certain positions feeling a bit more painful. However, if suddenly sex starts hurting after that period has passed and your IUD has settled in, that may be your body telling you that your IUD isn’t where it’s supposed to be, like poking into your cervix. Sex with an IUD isn't meant to hurt once your body gets used to its presence.

6. You Have Abnormal Vaginal Discharge

Your period will most likely change after you start your IUD. If you have the hormonal version, you’ll probably start experiencing lighter (or even no) periods. The non-hormonal copper IUD is known to make makes periods heavier, and lots of people experience some spotting for the first couple months. However, if you notice that your bleeding is more intense than usual or you’re spotting heavily between periods, that might be because your IUD is displaced.

8. You're Suddenly Getting Really Intense Cramps

Many people experience cramps right after they get their IUD placed, and the copper IUD can make your cramps more intense. But unusual cramps and pain can be a sign that your IUD is being expelled.

"Sometimes the uterus will recognize something as a foreign body ... so it'll start contracting like labor to sort of kick [the IUD] out," says Dr. Minkin. "Fortunately, that's pretty rare, but it can happen." Expulsions happen most often during the first year you have an IUD. An expulsion cramp will likely be very intense, as your muscles contract repeatedly to try and push the IUD out.

Most people who get IUDs have no issues whatsoever, and will enjoy up to 12 years of worry-free pregnancy protection. If your IUD does move after insertion, though, your doctor can help you out. They might pop the device back into place, or give you a new one if the first one is expelled. Once that's sorted, you can go back to living your life.

More like this
How Do I Deal With Both ED & Premature Ejaculation?
By Sophia Benoit
7 Women Share Their Best Orgasm Stories
By Lexi Inks
I Tried TikTok’s Favorite Menstrual Cup & Here Are My Honest Thoughts
By Meguire Hennes
Here's Why Your Nose Runs When You Eat
By Carolyn Steber
Get Even More From Bustle — Sign Up For The Newsletter

This article was originally published on July 21, 2016