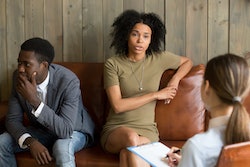 Lately, your relationship has been a little rocky due to your partner's bad attitude and annoying habit of blaming you for pretty much everything that's going wrong in their life. Sure, maybe there were one or two things you were actually guilty of, and you owned up to that. But what should you do if your partner blames you for everything? How can you get things back on track if this has become an established pattern? According to experts, a bit of compassion may be key here. If someone's pulling the blame card over and over, they're likely having a really hard time themselves and might need a little extra support and attention right now.

"It's human nature for someone to blame their partner when they aren't happy, and sometimes a partner may be depressed or too close to the situation to realize that it's not you that's the real issue," Susan Trombetti, relationship coach and matchmaker, tells Bustle. "It takes a big person to realize they're the problem, and your partner needs to be proactive in working on themselves, so there's more happiness between the two of you."

That being said, it’s not OK to be handed a huge, heaping pile of blame just because your partner isn't at tip-top shape at the moment. Sometimes certain people just naturally like to point fingers, and you know what they say: Every time you point a finger, three-point back at you.

However, we all go through good times and bad, and in the darker moments, sometimes toxic behaviors, including blame, rear their ugly heads. In that case, psychologist Kelsey M. Latimer, Ph.D., CEDS-S, tells Bustle that blaming is considered to be a "very unhealthy communication style that often leads to us fighting unfairly and bringing in the past into current arguments." If that’s the case for your relationship, you can work to find a solution together. Here’s what you should keep in mind and what you should do if your partner is constantly blaming you for everything.

Make your partner know that you're feeling blamed and catch it as soon as possible. "When left undiscussed, it can begin to become a pattern in the relationship that is seen as 'OK,'" Latimer says. "Patterns of blaming can lead to unhealthy and potentially abusive relationship styles and should never be tolerated."

Let your partner know how you're feeling in a clear way. From there, “make a very conscious effort to listen to what your partner is saying and really try to change your behavior for the sake of your relationship,” relationship expert and founder of Cupid's Pulse Lori Bizzoco tells Bustle. You might have some things to work on too. "Just as you have agreed to be more aware of the things that bother them, ask them to take a look at some ways that they too can improve the relationship,” she says. “Acting as a team toward these issues demonstrates support, care and compassion, and is the best way to keep the relationship going.”

2. Ask Your Partner To Point Out The Issue Gently

“We should never think in all or none, always or never,” psychologist Nicole Martinez, who is the author of eight books, including The Reality of Relationships , tells Bustle. “We should calmly and rationally point this out to their partner.” If your partner thinks you’re “always” to blame, there’s a problem. “Many times, things are coming up for the first time, so it would not be possible for them to ‘always,’ do something,” she points out. “Make a deal with them that if you are doing what they are saying, it is OK to calmly tell you that you are doing this.”

In other words, every time your partner gets an itch to blame, ask them (in advance) to instead just gently call out the issue. “This allows you to either clarify the reality of the situation, or take a look at yourself and your behavior if there are changes to be made,” she says. “The important piece here will be that this has to be open understanding, and work both ways.” Though you’re obviously not to blame for it all, you’re also not an innocent, perfect soul who never does anything wrong.

“There are two people in a relationship and you are each bringing issues and baggage to the table,” she says. “Be willing to talk about it, and see how you can both improve upon yourself, your behavior, and your relationship.”

3. Stop And Remember That Blame Isn't Really About You

If your partner blames you for every little thing, stop and think about whether their blame is really aimed at you or not. “I once heard a person say that blame is the discharge of pain,” relationship expert Dawn Maslar, aka “the Love Biologist,” tells Bustle. “I try to stop in the moment and realize that the blame is not really about me.” If someone is telling you you’re the cause of something, remember in the moment that it’s not really true. “It's about the other person's shame,” she says. “On those occasions where I don't take it personally, I can be loving and kind to my partner and sometimes explore long enough to find the real reason for their discomfort.” Remain curious — and keep your heart open.

4. Turn Their Temper Tantrum Into A Productive Moment

“Pause for a few moments and then say, ‘What do you want to do about it?’” Tina B. Tessina, psychotherapist and author of How to Be Happy Partners: Working it out Together, tells Bustle. This way, you’re turning their temper tantrum into a proactive, productive moment.

“Your partner has a bad habit, probably learned from family or earlier relationships, and the best way to extinguish a bad habit is to ignore it,” she says. “Getting your partner to focus on a solution instead of blaming is a better strategy.” If there really is a problem, you can solve it together. If not, you can let it go — together.

5. See If You Can Get To The Root Of The Problem

"If your partner blames you for everything, check yourself and figure out if you’re screwing up more than usual,” New York–based relationship expert and author April Masini tells Bustle. “If you are, then figure out why. If you’re not, and this is really about your partner being upset about something else and acting out by blaming you, it’s important to get to the root of the problem without escalating any negativity.”

It’s a tricky situation, but Masini has some tips. “Don’t get defensive,” she says. “This just builds the fight.” Instead, remain willing to hear your partner’s needs. “And later, with some time in between the issue and this talk, ask your partner if there’s something going on that’s upset him or her, because you noticed he or she is blaming you for things that you don’t think are all your fault.” In a nonjudgmental way, see if you can get to the root of the problem. “Ask your partner if there’s something going on that you can help with or just listen to.” Being kind and also actively alert to anything your partner and your relationship needs will make all the difference.

6. Be Willing To See Your Part Of The Issue

“Ask yourself, ‘Is my side of the street clean? Is there any part of this that is my responsibility?’” licensed marriage and family therapist Natalie Finegood Goldberg, tells Bustle. “This even means if it was only one percent your fault and 99 percent theirs — or someone else's.” It’s not always ideal, but it is always rewarding to look at your part in things. “Whatever is your 'fault,' it's important to take responsibility for,” she says. “Once you've done so … can you then ask your partner to take responsibility for their part?”

This is the important piece of the puzzle. Both partners have to be OK with shouldering their side of the issue. “If this is a theme in the relationship, it's also important to bring this up during a neutral time,” she says, “and acknowledge that the blame feels one-sided or that you feel held responsible for everything that seems to go wrong.” Using your words, rather than blowing up, will get you much farther. “Reminding your partner that you are a team and a team effort is needed to address whatever goes wrong also helps to shift the relationship away from a blaming dynamic and into a collaborative dynamic,” she says. And then a real shift can occur.

7. Set Boundaries And Walk Away If You Need To

If blaming becomes a frequent pattern in your relationship, you may need to set boundaries with your partner. As Tracy Dalgleish, clinical psychologist and couples therapist, tells Bustle, "A boundary would sound like, 'I see that you are upset [here you are validating them]. I can’t have this conversation with you when you are blaming me [here you are stating your boundary]. Lets have this conversation another time. [here's you letting your partner know they are important to you]." Sometimes walking away and saving the conversation for later can be the healthiest thing to do. The last thing you need is to get into a big argument.

8. Talk To Your Partner About What's Going On In Their Life Currently

It's not unusual for people to become difficult when they're going through a tough time. There's no good reason to treat someone poorly. But asking your partner about what's going on with them can help you decide how to handle their constant blame.

“If this a phase because of other stressors in their life such as work, family, etc., talk out what the issues are," dating coach Stefanie Safran, asks Bustle. Sometimes, people can get out of hand, and their behavior needs to be gently pointed out.

"If the person is just bent on trying to bring you down, you may be dealing with someone who is toxic and unable to cope when they are down or depressed,” she says. If that’s the case, as Rogers said, it’s best to move on.

9. Work Together To Find A Solution

“First, accept that while you may not be ‘to blame,’ you might have a role in the problem,” marriage counselor Jessica Wade tells Bustle. “Be curious about what part of the problem is yours.” If you’re hell-bent on shutting down any notion that you might be at fault, that’s a problem too. “Be truly curious and non-defensive to learn your part in it,” she adds. “Accept responsibility and commit to changing it.”

And you’re allowed to bring up your partner’s part as well. “Next, ask your partner to consider what’s his or her role in the shared problem,” she says. “Once you’ve demonstrated a non-defensive posture toward the problem, you’ve given your partner a chance to do the same.” Side by side, you can put your heads together and figure out a solution that’ll work for you both.

Nicole Martinez, psychologist and author of The Reality of Relationships

Tina B. Tessina, psychotherapist and author of How to Be Happy Partners: Working it out Together

Dawn Maslar, aka “the Love Biologist"

Stefanie Safran, dating coach and founder of Stef and the City

This article was originally published on Aug. 15, 2016