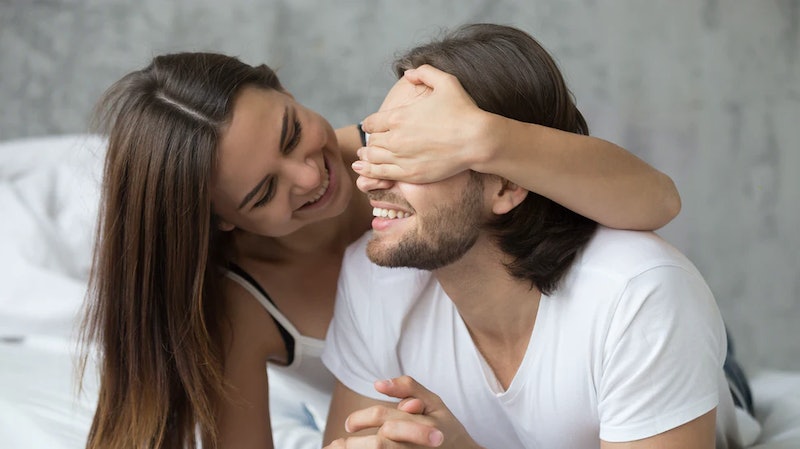 One of the best and easiest ways to boost attraction in your relationship is by being more playful with your partner, which can be done by mastering the art of teasing in order to build sexual tension. This is something you can do via text, throughout the day, and also by taking initiative to seduce your partner in the bedroom.

"Sexual teasing increases attraction for many due to the notion: love seeks closeness, desire seeks distance," Christene Lozano, LMFT, a certified sex addiction therapist and licensed marriage and family therapist, tells Bustle. "It's a bit of a paradox." But it's why teasing tactics like sexting can be so hot; you get to communicate that you're both in the mood, and the desire builds because you aren't side-by-side.

"For some, the idea of 'wanting what I can't have' in this moment increases anticipation and arousal," Lozano says, adding that sexual teasing can also add elements of novelty and spontaneity. In fact, playfulness has been shown to not only increase your connection in the bedroom, but also the overall sense of well-being in you relationship, according to a 2019 study published in the Journal of Research in Personality.

If you want to give teasing a try, and feel closer to your partner as a result, here are a few ways to get started.

Start Teasing Before You Even Get To The Bedroom

One of the best ways to begin teasing your partner is by flirting when a bed is nowhere in sight. In fact, "foreplay outside the bedroom is actually recommended," Lozano says. "One of the sexiest forms of teasing for some is sharing a deep, passionate kiss before entering a public space in which you won't be able to engage in anything more for some time." That way you both know you're turned on, but the fact you have to remain hands-off for a while longer increases a sense of desire.

You can also try sending steamy texts hours before your date. And the best part? There are so many ways to go about it, which is great if you feel a bit awkward at first. "You can use words, GIFs, emojis, voice notes, photos, and videos to pique your partner's interest, Dr. Jess O’Reilly, a resident sexologist with Astroglide, tells Bustle. "And you can take a minute to craft your message and edit as needed to ensure that it conveys your intended message."

Sharing what you want to do with your partner, as well as what you'd like them to do to you, will "intensify the physical pleasure once you're together in-person," O'Reilly says.

Talk About Your Fantasies

While it may sound a bit technical, talking about your fantasies can actually be really hot. Not to mention, it offers a moment before sex to establish boundaries, Mia Sabat, a sex therapist with the sexual wellbeing app Emjoy, tells Bustle. Tease each other by going into detail, and opening about your wildest dreams.

These are both fun ways to try out teasing. All you need to do, Sabat says, is "agree to have fun without judgements and let yourself go."

Tease Each Other With Sex Toys

“If you haven’t tried to before, you never know how you or your partner are going to respond,” Weedmark says. Here are a few areas to explore:

Scalp - While this erogenous zone my seem a little surprising, the scalp has tons of nerve endings, which make it very sensitive to touch. When stimulated, the scalp releases the feel-good hormones serotonin and dopamine.

Wrists - They’re particularly sensitive because they have thin skin. “For many, the surprising act of having their wrists kissed or caressed is a huge turn on,” Weedmark says. It’s definitely a must-try!

Sacrum - It’s also known as the lower back where the sacral nerves are located. According to Weedmark, these nerves shoot all the way back down to the vagina. So anything from light touches to a full back massage can be incredibly pleasurable.

Bring Unexpected Elements Into The Bedroom

Another fun way to tease each other is by getting a bit experimental in the bedroom. You could, for instance, turn each other into a "dessert" by drizzling chocolate or strawberry sauce in sexy places, or playing around with whipped cream, Bonnie Winston, a matchmaker and dating expert, tells Bustle.

It can also exciting to run ice cubes over each other, she says, and to play around with dressing up — which could be another way to indulge in your fantasies. Whatever you do, teasing will build anticipation, Winston says. "It literally gets the juices flowing."

This article was originally published on November 30, 2016