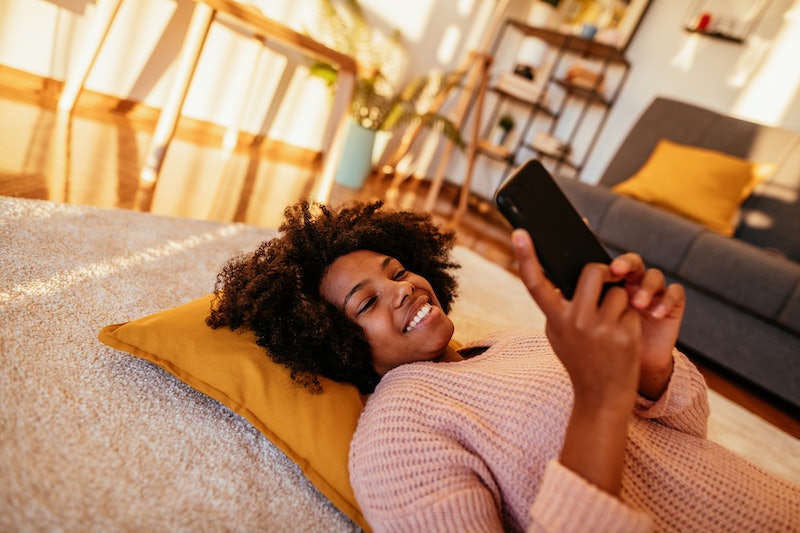 When Randa Sakallah, 26, first moved to New York City in October 2020, she knew there had to be a better way to meet people than mindlessly swiping on dating apps.

“My friends and I, we had been throwing around ideas for a database of single people,” she tells Bustle. “I had participated in a bunch of random dating experiments that I'm sure you had seen in the beginning of COVID, like blind dates [with] people on the phone.”

She then reached out to her network. “[I] was like, 'Do you know single people in New York? Make them subscribe to this,' without really knowing exactly what I was going to do,” Sakallah says.

Soon after, her weekly newsletter, hotsingles.nyc, was born. Every Friday, Sakallah, who has a full-time job in the tech world, plays Cupid by delivering an interview with a young single person looking for love to more than 430 inboxes.

While she doesn’t have particular criteria for who’s featured, most have been people she knows. But she also takes note of the singles receiving her newsletter. “Sometimes like if somebody interesting subscribes, [I’ll] like hit them up and ask if they want to be featured."

With subject lines that evoke personal ads from the ‘80s and ‘90s, each issue feels as though it’s making eyes at its reader, asking your mouse to come hither as it hovers. Recent singles include: 23M Tender Tinderer Seeking Millennial Man to Tuck Him in at 8 PM, 26M Reply Guy Seeks Internet Girlfriend to Ruin His Life, 25F Freaky Person With A Normal Side Seeks Normal Person With A Freaky Side.

As for what’s motivating a tone so unique you’re left wondering how each profiled person kisses? “I want to help people seem cool and interesting,” Sakallah says. “And I encourage people to talk about what makes them unique or what makes them stand out.”

After more than a year spent communicating mostly online, Sakallah is far from the only person dreaming up new ways to connect digitally with people. As people crawl back to post-COVID normalcy, dating app fatigue feels more prevalent than ever, which could be why there’s a new approach to digital matchmaking taking place — no swiping necessary.

For Chloe Burdette, what started as sharing videos of her attractive guy friends on TikTok — where she now has nearly 89,000 followers — has grown into Intro, which she hopes to turn into a full-fledged matchmaking business.

“Apps can definitely feel daunting because people are like, ‘Why is nobody swiping right?’ or the conversation is stale,” Burdette, 29, tells Bustle. “You need to get in front of the person.”

When showcasing her clients, Burdette, who works full-time in business development, focuses on videos rather than images to create a sense of interaction, so prospective matches can get a sense of what someone’s voice or laugh sounds like and, in turn, foster a sense of familiarity.

“I just understood how [men] would think because I'd spent so much time around them [while working in men’s fashion]. So you start to get into their personal lives and start to give them advice from a female perspective.”

Case in point? The infamous fish photo. “Girls cannot stand the fish photo, but guys are like ‘Look what I'm proud of, I caught this fish!’” she says. “And those two things don't translate ... so [I’m] pitching [men] in [the way women] truly want to see them.”

Burdette, who describes herself as “a natural connector,” takes a multi-tiered approach to get her clients in front of prospective partners. First, she sends out an email with a client’s profile that features a video. Next, potential matches can choose if they’re interested or not by replying to the message. It’s up to Burdette to sift through the replies and start the vetting process. Clients also have the option to be featured on social media.

“They can choose if they want to be on TikTok or Instagram. That’s just the fun added,” Burdette says, explaining that when she puts her clients on social media, their accounts are quickly discovered and they’re often flooded with direct messages from wannabe matches.

Alma, a Jewish culture site and online community, is also tapping into Instagram to foster connections among its readers by sharing classified ads to its 102,000 followers.

And it’s resonating with singles: Tolsky says that Alma’s photo-free approach to matchmaking — which has received more than 600 entries and counting since February — is already a success.

“I am proud to say we are also responsible for some ‘frequent and extremely good quality lesbian sex,’” she says, and that this Southern couple “fell in love after just one date.”

That “Southern couple” is Alek Wasserman and Deborah Silver, who are now in a serious relationship after connecting via Alma, a method they both agreed felt very different than dabbling in apps like Bumble, Hinge, and JSwipe.

“I think the classified was easy to engage with because it was already pointed in the direction I wanted (dating Jewishly) and it also took out the shallowness of dating apps. People take a three-second look and throw away someone who could actually be a great fit for them. That couldn't happen here since there was no picture,” Wasserman says.

Meanwhile, Silver says the format made things feel “less risky.” “I didn’t have to share photos or personal information right away, just my name, email, and a two-sentence bio. I wasn’t going to respond to just any classified, I only responded to Alek’s mostly based on his location,” she says.

Tolsky, who says she had “no idea if this would take off,” has been delighted by the response. “It's confirmed for us that there are real people on the other end of the phone screen, and it honestly feels like an immense privilege and opportunity to help make these connections.”

Although it’s too early to tell if anyone who matched via hotsingles.nyc will be promoted from inbox to exclusivity, Sakallah, who’s also dating right now, is satisfied with what her newsletter has done for people’s perspectives on their relationship status.

“It seems like one of the most valuable parts of [hotsingles.nyc] is just kind of changing the way that people view themselves as single people … I think a lot of [single] people feel like something's wrong with them,” she says. “There's some reason that they're single — and in some ways, [hotsingles.nyc] kind of celebrates being single. If that is all I accomplish with this, I think that's a really good outcome.”