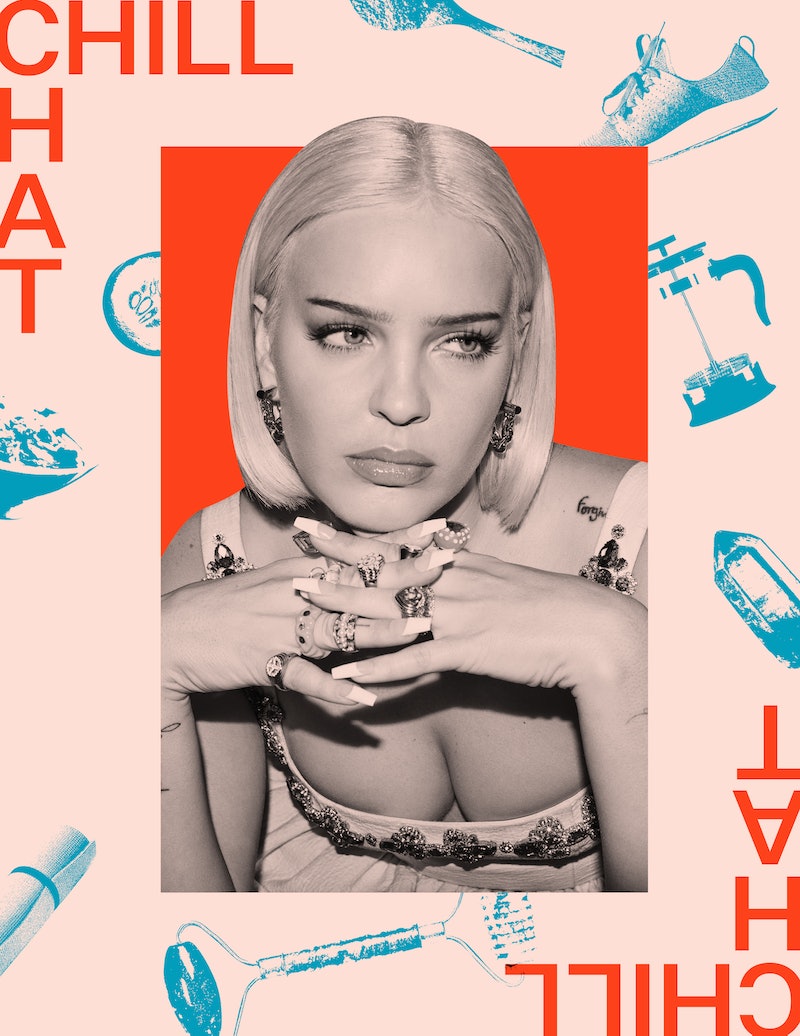 In Chill Chat, Bustle sits down with stars to chat about all things wellness, from their favorite workout to their hacks for getting a good night’s sleep. Here, singer Anne-Marie reveals the healing powers of writing, her fave face yoga routine, and why she thinks therapy is the least selfish practice ever.

Anne-Marie embraced plenty of self-care practices over lockdown but growing vegetables is possibly the most unexpected. “I’ve got tomatoes and carrots at the moment,” she tells me with a chuckle, “I still have loads of plants around me. I’ve got ten, there used to be 23 at one point...”

While the bubblegum pink-haired singer/songwriter discovered that’s she’s pretty green-fingered, that wasn’t her only revelation over the past year. The 30-year-old started going to therapy, a life-altering experience that has both inspired her upcoming album, Therapy (July,23), and the release of her first book, You Deserve Better (Sept 30).

The Essex-made talent also believes therapy paved the way for her phenomenally successful single with Niall Horan, Our Song, which topped number one on the charts.

“I’ve always been nervous about walking into a room with people I don’t know or have never met before but, seeing a therapist has helped me overcome those things,” she shares, admitting that even today’s Zoom call would have been a point of tension in the past.

“Even walking into a room with Niall Horan without knowing him beforehand, I never really would have done that before,” she said, shrugging. “I went in a scruffy jumper and joggers and he weirdly accepted me.”

In the singer’s journey to self-acceptance, she explains that she has found new ways to be honest with herself and her fans about mental health, without relying on “fluffy forced positivity.” “Real stuff,” she says, “not just ‘do yoga 10 minutes and you’ll feel sweet as a nut.’ Because that didn’t work for me.”

“We have physiotherapy and when we go shopping we have retail therapy,” she adds, “and yet, the word ‘therapy’ is triggering for people. I think everyone should get therapy instead of waiting until the point that you need real help.”

For Anne-Marie, the artist is enjoying “being OK with loving myself” and, she tells me, instead, of “pretending to be confident”, this time she’s starting to actually believe it.

“I drank coffee once by accident and never again. It tasted like the floor. I have ADHD, it made me hyperactive and everyone hated me!”

“I try not to look at my phone in the morning. I wake up, leave my phone there and get my breakfast. As soon as I look at my phone, it influences how I feel. That has literally changed my day so much and my mood.”

What’s a self-care ritual that people might be surprised you do?

“I do I bit of face yoga. There’s this Russian girl on TikTok who massages her face and I was like ‘what the f— is this?’ Next thing you know, I’m on the Youtube channel buying all the suction things, the Jade, and the rollers. I now do it 10 minutes every day, I watch her video and copy what’s she doing and I’m not joking, people keep asking me if I’ve had cheek stuff and botox done and I’m like no, it’s face yoga.”

“Writing lyrics is like writing a diary for me. Writing a book was like I was learning again. It’s all part of it. It’s a natural thing.”

How do you unwind after a hectic day?

“I watch Say Yes To The Dress, I read a book maybe, and make some food. Cooking is calming for me.”

“I started listening to music on a walk a little while ago and it was incredible as it removes you from where you are. I’ve never felt that before. It’s magic. I need to make a playlist, to be honest.

I love ‘Her Morning Elegance’ by Oren Lavie and ‘Heartbeats’ from José Gonzáles.”

“Something with aubergine. I’ve been doing a lot of miso aubergine and rice lately.”