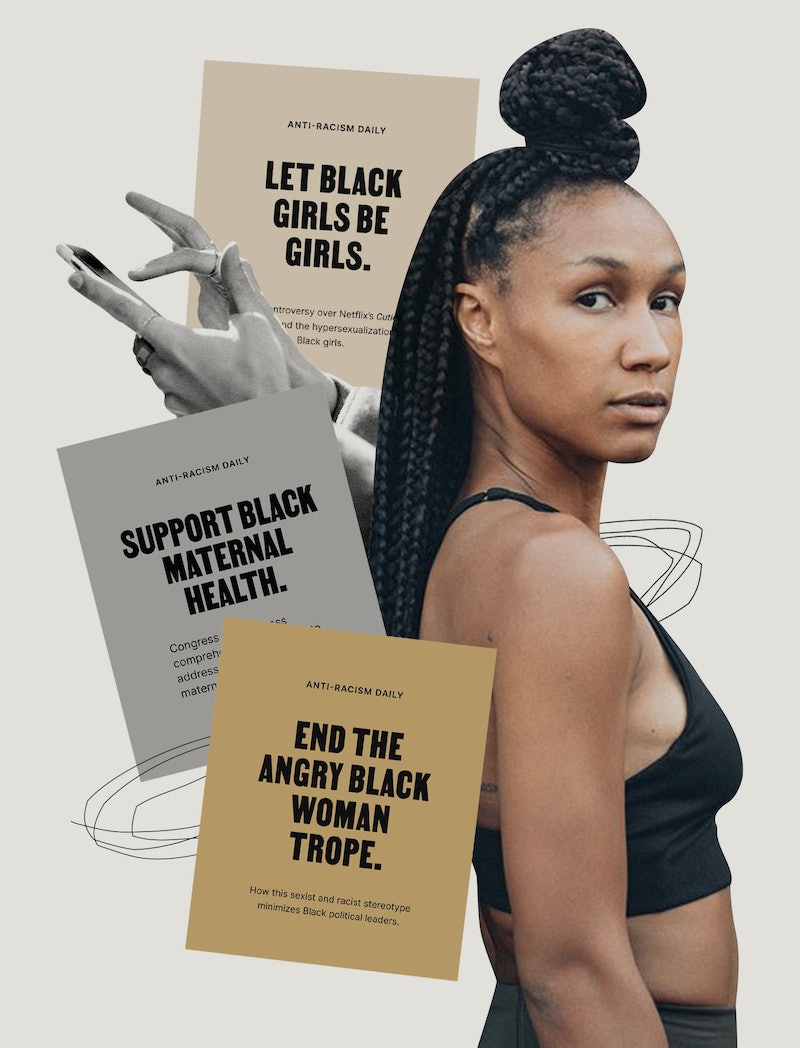 In the aftermath of Minneapolis police officers killing George Floyd in late May, hundreds of thousands of people across the U.S. took to the streets to protest racism and police brutality. In response, yoga instructor, founder of Yoga Foster, writer, and entrepreneur Nicole Cardoza started a newsletter called Anti-Racism Daily featuring actions to take against white supremacy. In its first four days, the newsletter attracted more than 20,000 subscribers; in just over three months, the Instagram account gained about a quarter of a million followers.

Below, Cardoza talks to Bustle about performative wokeness, dealing with racist comments on social media, and the importance of prioritizing wellness.

How do you and your team choose the topics for Anti-Racism Daily?

I write a majority of the newsletter’s content, but I also edit and curate other writers on the platform. We focus on listening to the community — what stories need to be heard and what stories demand action. I listen to local journalists writing about news that's often overlooked by mainstream media to give journalists the visibility that they deserve. I'm prioritizing sharing perspectives on anti-racism beyond my direct experiences as a Black cis woman. We're inviting more people to the conversation, rather than gatekeeping.

When you sit down to work on the newsletter, whom are you writing for?

I'm not going after a particular demographic, and I'm certainly not going after deniers or trolls. I'm not writing this for people who have already made up their minds and already decided that there's not an issue. If people are not willing to listen, then this newsletter is not for them. We're not offering a basic checklist of things you can achieve. It really does take doing the work.

You've talked about the importance of spreading anti-racist messages by letting posts go viral on their own. Why is that?

I can't run ads for Anti-Racism Daily — we've tried, and we've been flagged and banned from major sites because the word "racism" is included. We don't have any other options than to ensure people share our work naturally.

With all this reach comes readers who may be less responsive to what Anti-Racism Daily is all about. How do you deal when you read negative, trolling, or outright racist comments?

It's really difficult, but it comes with the job and territory. I don't have space or energy for it — I have to protect my boundaries. I block and delete as often as possible. I report things quickly. Someone asked me once whether or not I go to bat with trolls, and I'm like, "No, they've already made up their mind."

Has there been feedback to the newsletter that inspires you?

People actually taking action inspires me — when people email me saying that they signed their parents up for the newsletter, and their parents tell them about things they learned. It's great when people share resources online — we grew our Instagram to over 275,000 followers because people did just that — but all that matters is that people are taking the work off social media.

I also love to hear when businesses are going beyond performative wokeness to actually developing policies and practices that serve all people. We've all seen examples of businesses, celebrities, and everyday people pretending they're doing work by using their social profile. That type of thing is starting to show itself now. Many people are realizing that what they pledged to do online doesn't match what they do offline. And that's where the real change starts.

As a wellness professional, you’ve been outspoken about avoiding toxic productivity — romanticizing a constant grind over prioritizing your personal needs. How do you keep your work as non-toxic as possible?

I've always seen myself as productive and engaged in my work. With Anti-Racism Daily, I learned quickly that I need to have significant time in my day for rest that I've never needed before. I carve out time for yin yoga and restorative yoga. I'm allowing myself to sleep for as long as I need. I spend time in nature every single day, and I'm trying to figure out what the best balance is.

For people who are looking to commit to anti-racist work in their communities, what's your advice?

Carve spaces for yourself and your community, especially if you don't already see those spaces. If you feel you’re not being heard or seen, we need to hear from you especially. Know that what you create doesn't have to be based on what’s already out there. I just hope that people don't wait for their follower count or any kind of permission to try to take action. Even if you just change one person's mind, it still makes a tangible difference.

What’s next for Anti-Racism Daily?

I'm committed to expanding our group of writers, to grow with more diverse perspectives and experiences in racism. We are launching a podcast and potentially videos for people who prefer learning in different ways. I'm going to keep sending the newsletter every single day until racism is an outdated term in America. I’m looking forward to the day when I wake up and there's nothing to write about.

More like this
For These Abortion Clinic Volunteers, Going TikTok Viral Is A Risk Worth Taking
By Audra Heinrichs
How Getting An Abortion Has Changed From The ’60s Through Today
By Amanda Chatel
Plan C Vs. Plan B: What's The Difference?
By Lexi Inks
The UK Abortion Laws In 2022, Explained
By Sophie McEvoy
Get Even More From Bustle — Sign Up For The Newsletter