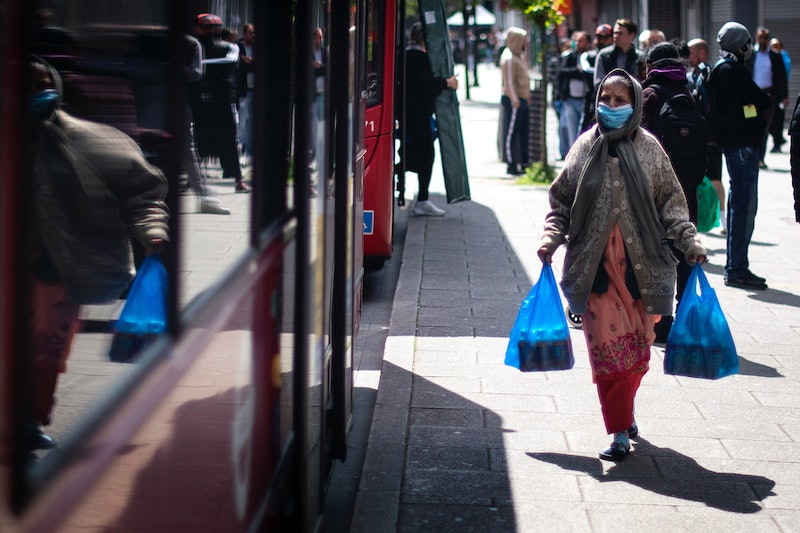 For Black, Asian, and Minority Ethnic (BAME) people in Britain, shielding from the pandemic has revealed a unique set of challenges. From being overrepresented in key worker roles to having to use public transport more frequently, a new report has shed light on why BAME communities are worst hit by COVID. According to the findings by racial think-tank Runnymeade Trust, ethnic minorities have been "over-exposed" and "under-protected" during the pandemic.

The report examined jobs, households, financial, and other socio-economic disadvantages that may have led the disproportionate number of COVID cases among ethnic minorities.

For Bangladeshi and Black African families in particular, the study found more instances of "multigenerational households" and listed "overcrowding" as a potential risk factor. For Black and Asian families, where living with grandparents is often commonplace, minorities are also "more likely" to live with someone vulnerable to the virus.

In the survey of more than 2,585 adults in Great Britain, the report found "Black groups are particularly likely to be classed as key workers (34%), with the highest percentage among people of African origin – nearly four in ten of whom are key workers (37%)."

As many will remember, the first 10 doctors to die in the UK from COVID-19 were all from BAME backgrounds, including Dr Amged El-Hawrani, a consultant at Queen’s Hospital in Burton, who was the first frontline medic to die after testing positive for the virus. In late April, the NHS made a move to protect and reassure its BAME workers. Yet many other minority key workers, from all fields, reported that they still had not been given adequate PPE in comparison to their white counterparts, reveals the report.

It was first discovered the ethnic minorities were disproportionately affected by the coronavirus in early April when a study from the Intensive Care National Audit and Research Centre revealed that, of the 2,000 patients critically ill with the virus in England, Wales, and Northern Ireland, 35% were BAME. This is despite the fact ethnic minorities make up only 14% of the UK population.

After a nationwide call-to-action, the UK government launched an investigation. Yet its official findings published June 2 seemed to lack the crucial information we were hoping for. As Bustle reported in June, many pointed out that the report re-iterated what we already knew. (You can read the full report, which looks at factors such as age, sex, geography, and pre-existing health problems and their impact on COVID cases, online here.)

As it's now well documented that the virus disproportionately affects minority groups, many have wondered what will be done to further protect BAME communities.

Between harsher "negative financial impacts" and increased risks at home and work, the findings of Runnymeade's report are concerning, and in many ways, the pandemic has amplified existing racial inequalities in the country.