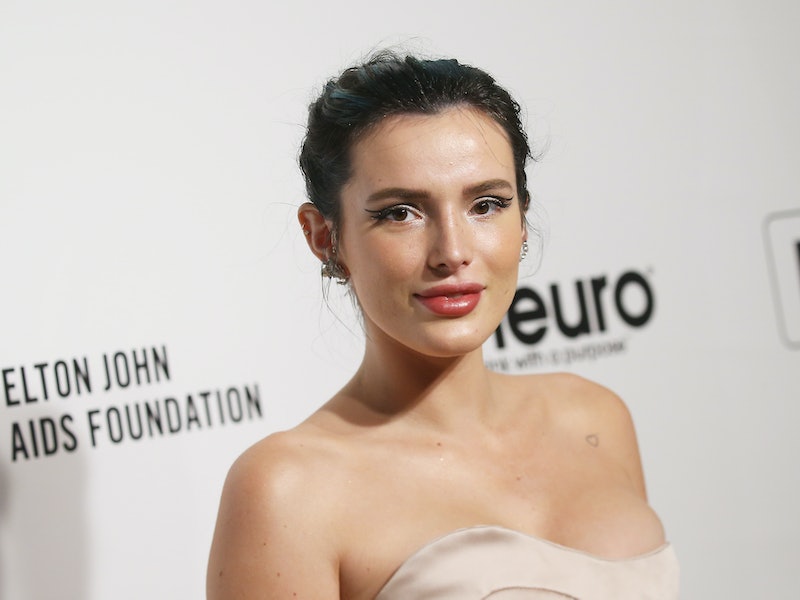 Add a former Disney star threatening sex workers' income to the list of things no one wanted to come out of 2020. In the wake of Bella Thorne's OnlyFans scam, sex workers and advocates are taking to TikTok and Twitter to discuss how Thorne's actions have harmed OnlyFans performers. On Aug. 19, the actor announced via Instagram that she had started an OnlyFans page. Charging viewers $20 a month to see her saucy content, Thorne made one million dollars within her first day on the site, and two million her first week. But Thorne's big payday was short-lived — the star charged subscribers $200 for an exclusive pay-per-view (PPV) photo that claimed full nudity, but then featured Thorne in lingerie, not fully nude as advertised. This led hordes of angry fans to demand refunds from the site.

On Aug. 27, OnlyFans announced that they would start capping the amount that performers can charge for PPV content to $50, and the amount that new fans can tip to $100. The statement also included that performers in some countries can now only get "payouts," or receive their earnings, once every 21 days instead of weekly. Though OnlyFans denied that these changes were related to Thorne, performers and sex worker advocates claim it's an unlikely coincidence.

"Rightfully so, her customers started doing mass chargebacks, TikToker and sex worker Nikki Newhope tells Bustle. "But Bella had already withdrawn her money from the site, leaving OnlyFans to clean up the mess then quietly implement rules on people who didn't deserve these rules."

For OnlyFans performer Bea King, the new charging caps and payment schedules are detrimental to sex workers and performers who rely on OnlyFans. "Most of us are survival sex workers," King tells Bustle. "We literally depend on this income to feed and shelter ourselves."

Because federal regulation excludes businesses and workers of a "prurient nature" from receiving government assistance, sex workers and those in the sex economy (like strippers, sex shop owners, and sex educators) face higher risks for poverty and housing insecurity. As social distancing continues to rule social life, many sex workers, strippers, and performers have begun using OnlyFans to support themselves virtually. According to a site representative, OnlyFans saw a 75% increase in new users in March and April, with 200,000 new daily subscribers.

King says wealthy celebrities creating OnlyFans threatens the livelihoods and survival of sex workers. "Many of us had a very slow month when Bella joined, and her account played a role," King says. "It's a novelty to gain access to a celebrity, so many people are going to go subscribe to her rather than someone ordinary."

Newhope echoes this sentiment, adding that Thorne is actively gentrifying and appropriating sex work. "It's really not cool to LARP (live-action role-play) as a sex worker," Newhope says. "The majority of real sex workers are called criminals or whores. She got to slide in for fun, reap the massive benefit, and get quoted by Rolling Stone and similar publications as an 'entrepreneur.'"

After facing criticism, Thorne took to Twitter on Aug. 29 to share a statement asserting that her intentions were to destigmatize sex work by bringing a "mainstream face" to OnlyFans. But sex workers remain skeptical. "Celebrities going on these sex work platforms further stigmatizes us," Newhope says. "Onlyfans jumps at the chance to have a celebrity be the face of a platform. It's a much better look for them then 'icky sex workers' that are so shunned."

While celebrities need to be allies to sex workers, Newhope says that there are more productive ways to support than start an OnlyFans. "Start by acknowledging that we are humans, that we deserve equal rights, and at the very least decriminalization," she says. "Just like with any movement, if it's not about you, don't make it about you."