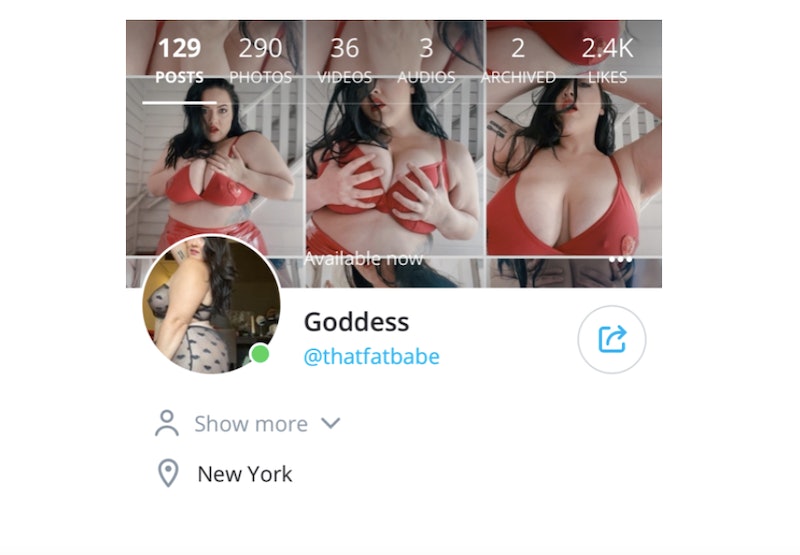 Amid a global pandemic, subscription-based content services are becoming trendier than nut milk and facial serums. From Caroline Calloway to Aaron Carter, it seems like everyone and their mother is making an account in quarantine. But celeb sightings aside, what is OnlyFans?

If TikTok is an all-you-can-eat buffet, consider OnlyFans a membership-only private dining club. Started in 2016 by British tech entrepreneur and investor Timothy Stokely, OnlyFans is a digital content platform where creators charge their viewers to see their photos and videos. The site calls itself "a very powerful and useful tool" for influencers and content creators because it allows people to make money from sharing their personal content (rather than by posting #sponcon or promoting a product).

People are looking for deeper social connections beyond just photos and videos.

Since its launch in 2016, the website has paid out over six hundred million dollars to its creators. But it's important to note that OnlyFans retains 20% of what creators earn, meaning creators only receive 80% of their profits.

Creators can opt for viewers to have monthly subscriptions (which start at $4.99 and can go up to $49.99) or can have free pages where they charge viewers to access specific pay-per-view (PPV) content. Some creators may have both — a subscription page and a free page — to optimize their earnings. However, on Aug. 27, following actress Bella Thorne's OnlyFans scandal, OnlyFans set transaction limits, capping the price of PPV content to $50 per post, and tips from new fans to $100 per tip. OnlyFans also changed the frequency of "payouts" or when performers receive their earings in some countries from weekly to every 21 days.

While OnlyFans' interface is similar to other social media platforms, it isn't an app. Why is that detail important? Because Apple forbids apps with “overtly sexual content."

While the site claims to be for all "public figures and influencers," the lack of content restrictions gained OnlyFans an early reputation as a site for sex workers and adult performers. And although it started as a small start-up with just 10 creators, OnlyFans became more popular as it became more interactive.

In addition to posting uncensored pictures and videos, creators can host live streams where, similar to Instagram, followers can watch a creator perform (or just hang) in real-time. There's also a feature that lets creators both private and mass message their viewers, allowing them to know about new posts or new exclusive content, as well as polls and other interactive features to optimize viewership and increase audience engagement.

As Fit Sidney, creator of the OnlyFans page, Fit Sid shares, OnlyFans created a more reciprocal relationship between performers and viewers. Because of the site's interactive features, fans aren't just able to see their favorite creator's finished videos — they're able to message models directly, watch sex workers live stream, and vote on the type of content they wanted to see next.

“You have to talk to your fans,” Sidney tells Bustle. “I wake up, I answer all my messages, I go live shoot content, then I get back to messaging people. I shoot customs and clips, and then I message for hours at night."

OnlyFans lets creators sell interactive or personalized content (like access to live streams or voice recordings) within the site for additional costs. While some creators may be more subjective with their pricing, others, like Sidney, have taken to making a "Tip Menu," where they establish set rates for certain types of encounters or interactions.

OnlyFans creator Clara* tells Bustle that her tip options include both exchanges (where a fan will pay for something Clara is offering), and gifts (where a fan just sends money). Her Tip Menu ranges from exclusive photos of herself that aren't posted anywhere else, the "Girlfriend Experience" (where Clara will text/interact with a fan for the day like she's their girlfriend) to prompts like "Pay For My Phone Bill" or "Treat Me To Dinner."

Megan, creator of the OnlyFans page That Fat Babe, says that while monthly subscriptions get the fans in the door, the real profit comes from "tips" and extra compensation from her viewers (of which OnlyFans still takes 20%.)

"You're able to give attention to the people who want it," Megan says. "And you can charge for that attention."

As social-distancing continues, it's clear that personalized attention is exactly what people want. Since March, searches for "OnlyFans" have skyrocketed on Google. A representative from OnlyFans shares that through March and April, the site saw a 75% increase in new users, with around 200,000 new people subscribing to OnlyFans every day. According to the rep, OnlyFans currently hosts over 30 million users and 450,000 creators.

"I’ve found that more people are looking for deeper social connections beyond just photos and videos," Bradbury says. "They want to personally connect or even make changes in their lives or relationships."

For Megan, a big surprise has been a rise in women and AFAB people who want to talk about sex and body positivity, as well as users seeking out "The Girlfriend Experience," or wanting to talk to her as if they're dating.

"I think a lot of people have been seeking a specific person and finding intimacy — even if it's with a stranger," Megan says. "And I feel like I've provided that for some people."

All the creators agree that maintaining an OnlyFans profile is more work than people realize. After constantly developing and producing new content, stripper, aerialist, and performer Sunny Serrano edits everything herself and then strategizes where and when to post her content.

Already having an existing fanbase is the way you're going to have a platform on OnlyFans.

"Any kind of nudity goes on my paid Only Fans, but I save the extra spicy stuff for pay-per-views that I send out a couple of times a week," Serrano tells Bustle. "Images that would get me shadow-banned on Instagram and Twitter go to my free Only Fans, and images that don’t contain nudity are for promotion."

But OnlyFans is only really lucrative when a creator already has an established group of followers across their other social media. Since OnlyFans doesn't have tags or an "Explore Page," there's no way for fans to search for other creators within the site, which makes it harder for fans to find new pages to subscribe to.

"Already having an existing fanbase is the way you're going to have a platform on OnlyFans," Megan tells Bustle. "You're bringing traffic from other places, and this is where they can get more content from you."

OnlyFans' growing popularity, however, has a dark downside: The uprise is inspiring competition between creators. Per Megan, the site gives you a percentage of what you're making compared to everyone else on OnlyFans. Creators will post their percentage in their name on their page, promoting their popularity. Megan says she had no idea that doing so was competitive until she witnessed tension in different Instagram and online groups of models and content creators.

Megan, creator of the OnlyFans page, That Fat Babe

More like this
Wait, Vabbing At The Gym Is What Exactly?
By Carolyn Steber
How To Schedule An Instagram Post
By Emma Carey
How To Turn WhatsApp Read Receipts Off
By Emma Carey
12 Cheeky Instagram Captions To Use When You Haven’t Posted In Weeks
By Emma Carey
Get Even More From Bustle — Sign Up For The Newsletter