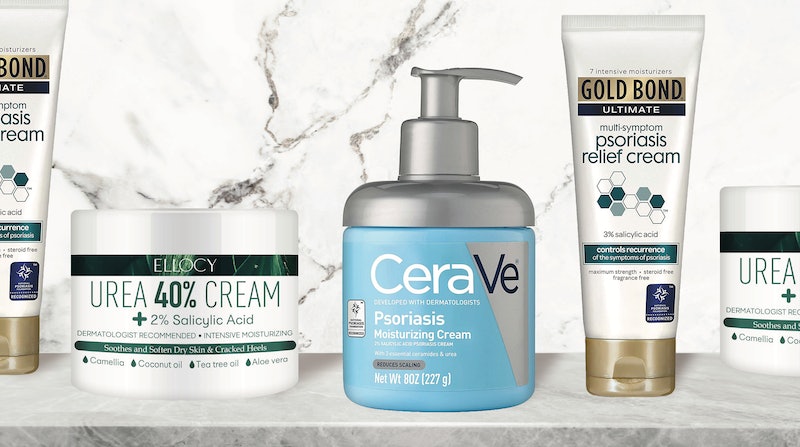 All lotions aim to minimize dry skin, but the best lotions for psoriasis feature doctor-approved ingredients to reduce scales or slow skin-cell turnover while minimizing inflammation and irritation. That's why I got in touch with Dr. Suzanne Friedler, M.D., board-certified dermatologist with Advanced Dermatology PC, to help narrow down the options. "Psoriasis is a condition in which a dysfunction in the immune system leads to inflammation and the rapid turnover of skin cells," Dr. Friedler told Bustle. As a result, the right lotion will have the right ingredients to help with the symptoms.

According to Dr. Friedler, "Some ingredients that can help include salicylic acid and urea which work to cut down on thick scales." Dr. Friedler also wrote that "coal tar can help by slowing down the turnover of skin cells." All of the psoriasis-friendly moisturizes listed below contain one or a few of these ingredients — but note that it's not just about what you put on your skin. Dr. Friedler was also sure to express that diet, a low-stress lifestyle, and avoiding irritating cleansers and beauty products may also help. Furthermore, "while psoriasis has no cure, there are many new prescription treatments available from a dermatologist that can keep psoriasis in long-term remission." And it's always a good idea to consult a medical professional.

If you're looking for an at-home lotion to temporarily treat your psoriasis symptoms, here are four options that are highly rated and contain effective ingredients while remaining gentle.

In addition to being a fan-favorite (it has more than 5,000 reviews and a 4.4-star overall rating on Amazon), CeraVe's Moisturizing Cream for Psoriasis is also a direct recommendation from Dr. Friedler. It contains 2% salicylic acid to minimize redness, itching, and flaking. Plus, it's filled with nourishing ceramides — much like the original formula — which help to replenish your skin's natural moisture barrier. Finally, it's fragrance-free and comes in an easy-pump bottle that reviewers call "very convenient."

One reviewer wrote: "This is excellent stuff for psoriasis sufferers. My doctor recommended this cream [and] with a week’s steady use, you can barely see the psoriasis patches anymore!! Thank you, CeraVe!"

Most psoriasis lotions cost upwards of $30 for a single jar, but Gold Bond's psoriasis formula is less than $10 — even though, according to reviewers, it still super effective. In fact, this cream has over 3,000 reviews and a 4.5-star overall rating. It contains 3% salicylic acid to soothe redness and flakes. Plus, one reviewer notes that the consistency is "light and absorbs quickly," unlike greasier alternatives.

One reviewer wrote: "Husband had been suffering from itch and redness behind his ears for a long time — after researching, found this while it was on a GREAT sale price. He used for a few weeks and it has totally resolved."

3. The Best For Extra-Stubborn Psoriasis

It's technically an ointment (and is therefore thicker and more oily than your average lotion), but Psoriasin is another direct recommendation from Dr. Friedler. It contains 2% coal tar, which is supposed to slow the turnover of skin cells — and as a result, it's a favorite among those with stubborn psoriasis. Dozens of reviewers report that this stuff stopped their itching, flaking, and redness. "I have had sometimes mild, sometimes moderate psoriasis for almost thirty years. Coal tar is the ONLY thing that helps. One patch cleared in three days! A very stubborn large patch on my ankle looks much better," one buyer described. Plus, a little goes a long way, and you get two in each order.

One reviewer wrote: "The only thing in 15 years that has worked! [...] I hope they never stop making this."

4. An Affordable Cream With 4.7 Stars

Ellocy's Urea cream may ease the symptoms of psoriasis without causing irritation and comes in at under $20. Plus, with a 4.7-star overall rating after more than 1,000 reviews, it's a popular pick with customers. It has two of Dr. Friedler's recommended ingredients (salicylic acid and urea), but it contains no fragrance or dyes, and contains soothing ingredients like coconut oil, aloe vera, and tea tree oil. Even though it's marketed as a foot cream, those with psoriasis have seen great results.

One reviewer wrote: "Works fantastic on spots of plaque psoriasis! Have tried MANY other products with varied results, but this one is diminishing the areas the best of all of them. Saw results within a week."