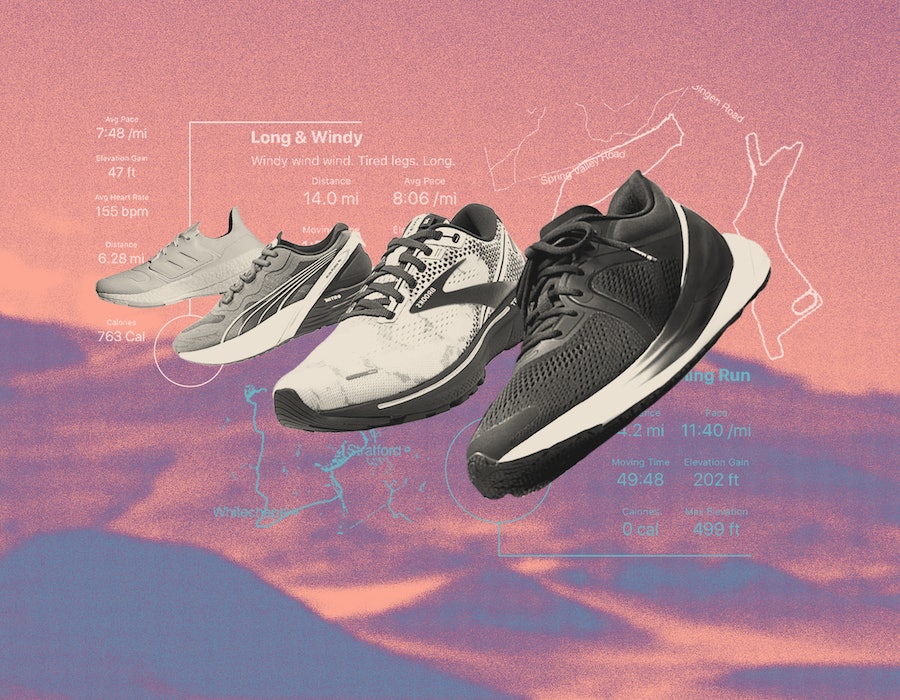 Despite the pinks, purples, and pastels they come in, women’s running shoes have largely been designed based on male feet. That’s because shoe companies build their products around something called a “last” — a mechanical form shaped like the human foot — and, for a long time, most only used lasts based on men’s feet. It wasn’t until recently that some started using women-specific lasts for their women’s shoes, while some use unisex ones.

That’s kind of unbelievable, because women’s performance footwear was growing faster than men’s as of summer 2021, according to NPD data. And in 2018, for the first time ever, more than half of runners were female, according to The State of Running 2019 report by RunRepeat.com.

And yet, only in 2022 have large shoe companies begun to rethink women’s shoes from the ground up. By summer, though, four major brands will have debuted running shoes built specifically for women’s feet. Below, I’ll take you through each of them.

When I first signed up for the 2016 Boston Marathon through work (I was an editor at a fitness magazine at the time), I thought I’d be a one-and-done marathoner. Cross it off the bucket list, you know?

Six years later, I’m training for marathon number 10. Something about the physical and mental challenges of running 26.2 miles really hooked me: No matter how hard you train, it’s just too long of a distance to ever really predict how race day is going to go — all you can do is show up and hope your lungs, your legs, and your brain are ready to give it their all. Plus, I love the community I’ve found through running, both on social media and IRL. Since that first race, I’ve gone all in on fitness writing and running: I regularly test all kinds of gear, from sneakers to apparel to wearable tech, and I’m an RRCA- and UESCA-certified running coach.

The “shrink it and pink it” approach to women’s footwear has long been outdated. “Science is starting to recognize that women have a different physiology than men — and if we apply the same treatments or interventions, women aren’t going to respond in the same way,” says Kate Harrison, a researcher with the Performance Fit Lab at BOA Technology. As the miles add up, those differences can have a cumulative effect that can lead to discomfort and even injuries.

“Women have, on average, different dimensions of the foot — they’re not just smaller, but the ratios are different and so a male or unisex last is not going to accommodate those variations,” says Harrison. For example: “Women’s heels are very narrow in relation to their forefoot compared to men,” says Shannon Thompson, a Boston-based podiatrist and owner of Ace Feet. That additional pressure at the forefoot can cause issues like neuromas (pinched nerves at the toes) and hallux valgus (where your big toe pushes inward); on the heel, you risk blisters and forfeiting the injury-preventing benefits of a secure fit, says Harrison.

Female runners also move differently. “Their ankles and knees tend to track a little bit more toward the midline of the body, in contrast to a male,” says Harrison. “We see that reflected in the types of injuries that men and women experience — women tend to have more knee injuries, whereas men tend to be more prone to Achilles or hamstring injuries.”

The upshot: “Look for shoes with a soft, breathable upper to allow the toes to move and flex freely while running,” says Thompson, who recommends holding the shoe by the heel and tapping the toes on the ground to check toe flexion. “Push down and see where the shoe bends. A good running shoe will flex fairly easily where your toes normally would. If it curls or bends in the arch area, it won’t offer the support most women need.”

Another key feature: a rigid heel counter — that’s the piece of plastic on the heel cup that aids rearfoot stability. “To check the stiffness of the heel, grab the back of the shoe between your thumb and forefinger and squeeze. The heel should move very little or not at all,” says Thompson.

Whether you end up in a shoe designed for women or not isn’t a big deal. “Just try on a lot of different shoes and trust your instincts,” says Harrison. “There’s going to be so much variation even within female feet that it’s really important to be open to different options and find what feels best to you.”

Here, a breakdown of four of the best.

The best thing I can say about running in Lululemon’s first running shoe is that I barely noticed it. And that was the point: The brand approached the design from a “feel first” perspective, using foot scans from more than a million women to build in functional features that wouldn’t distract from the run itself. Underfoot is a single layer of thick midsole foam, surrounded by a rubber outsole. The outsole is softer and more flexible up front to accommodate a wider forefoot, and more durable around the heel to provide more cushioning for those with less body mass. I personally prefer a few bells and whistles when I’m doing a workout or running double-digit miles, but these are a solid option for conversational-paced runs where my focus is on the experience (and joy!) of running — not how hard I’m working.

Adidas Ultraboost 22
Amazon
Adidas reimagined a fan-favorite with more support and energy return so female runners can go as far as they need to in comfort.

I wore the original Ultraboost for four out of my first five marathons — that’s how comfortable it is for long runs. The latest iteration was redesigned by an all-female team around a female-specific last developed from 1.2 million foot scans. The result: a narrower heel that locks in your foot, a lower instep curve that feels snug but not tight, and more stability around the outsole. The max cushioning from the BOOST midsole foam is the same as in the Ultraboost 21, but with extra arch support and a stiff plastic insert embedded in the bottom that encourages a powerful pushoff. As a result, you’ll get 4% more energy return — creating a stronger springboard effect to propel you forward with every step — than in previous versions. I found these to be a little heavier than my typical long run shoes, but logged 16 miles with nary a hot spot, blister, or ache in either foot.

When Puma made its reentry into the running market in 2021, they did so by building every new running shoe on gender-specific lasts. Now, they’ve gone a step further with the Run XX Nitro (available June 1), designed from scratch for female runners. Not only does it hug the heel, instep, and arch, but extra support and stability are built in via a firmer version of the NITRO foam midsole used in the brand’s performance shoe range. There’s also RUNGUIDE, a rubber strip that wraps from the edge of the midfoot around the heel to keep your foot centered through each stride. I could feel that support the second I slipped the shoes on, especially in the heel. The stiffness took a little time for me to get used to, but I also felt myself naturally moving faster without even thinking about it — an ideal scenario.

Brooks Ghost 14
Amazon
This workhorse of a trainer hits all the right notes—soft but not too soft, supportive without being stiff—with female-friendly features built right into its DNA.

Brooks is the largest women’s performance running shoe brand (yep, even beating Nike), and the Ghost 14 is the brand’s best-selling women’s running shoe. It’s not designed specifically for women, like those mentioned above, but it does have a number of female-friendly features: The updated 3D print mesh upper has a more flexible fit in the front to accommodate womens’ wider forefoot, and the new midsole is made entirely of DNA LOFT, the brand’s softest cushioning, which protects your legs from the repetitive impact of running. Combined with the Segmented Crash Pad in the heel (which absorbs more impact upon landing) and a 12mm drop in height from the heel to the forefoot, the shoe helps you naturally roll through the gait cycle with as little wasted motion as possible. It’s the kind of shoe I can slip on without ever stressing about how far I need to go.

At the end of the day, the best shoe for you is the one that feels most comfortable — whether it’s specifically designed for the female foot or not. But the fact that brands are widely acknowledging that women’s feet are different from men’s — and that women make up a powerful portion of the shoe-buying market — is a win in my book. If you’re not sure where to start, head to a running specialty store where an expert can check out your gait and make recommendations.

How To Make Your Shoes Last

I get it: Good running shoes are expensive. Once you invest, you can do a few things to really get your money’s worth.

For starters, only wear your running shoes when you run. Experts say the average running shoe should last anywhere between 300 and 500 miles, and all miles count, even if you’re just walking or running errands.

To further extend your shoes’ lifespan, alternate them with a second pair — as an added bonus, runners who switched between two different pairs of running shoes had a 39 percent lower risk of running injury than those who almost always ran in the same shoes, according to a 2013 study in the Scandinavian Journal of Medicine & Science in Sports.

And if you need to wash them (foot odor is no joke), don’t throw them in the washing machine or dryer; both can damage the integrity of the foam inside the shoe — whether it’s from tumbling around or high heat — meaning you won’t get the same benefits from them. Instead, soak them in water and eco-friendly laundry detergent, scrub any stains with a brush, and let them air dry.