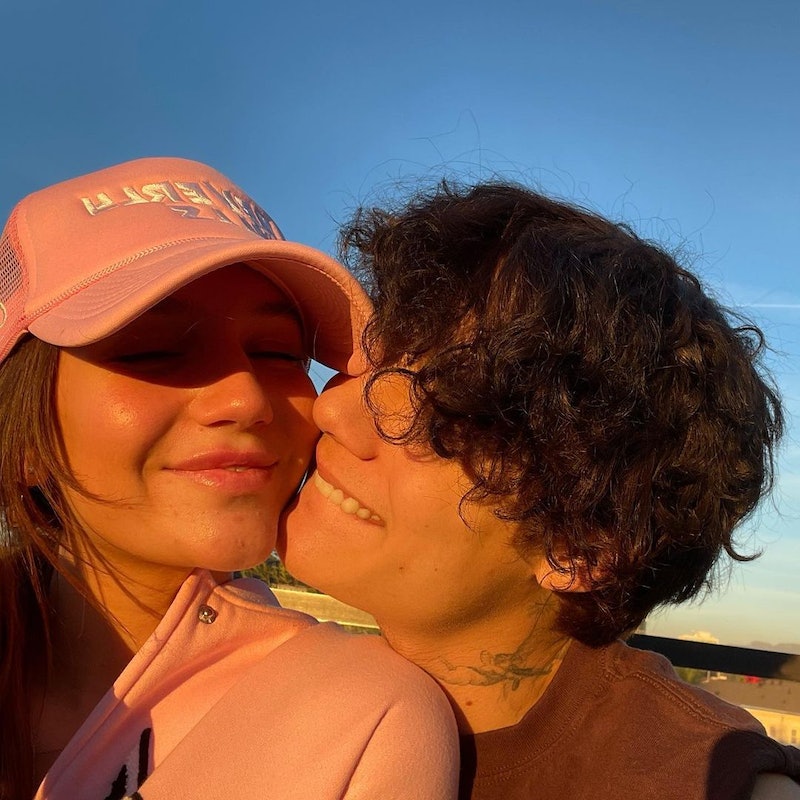 Coming at us all the way from the depths of your 2010 CD collection is Taylor Swift’s song “Better Than Revenge,” which is currently spinning in the background of the new Better Than Revenge TikTok videos. It’s all part of some juicy, juicy social media drama, so if you’re in the mood, strap in.

As you probably know, Swift’s iconic lyrics go, “The story starts when it was hot and it was summer/ And, I had it all. I had him right there where I wanted him/ She came along, got him alone, and let's hear the applause/ She took him faster than you could say sabotage.”

Just like the song, the trend focuses on backstabbing and women who take each other’s boyfriends. You typically see a montage of a happy couple in the videos, hugging, kissing, and smiling. And then, right as the lyric about sabotage drops, that’s when it becomes clear their story doesn’t end well.

At that point, the montage switches to photos of the poster’s now-ex with another woman. (Or it shows evidence that she was, in some way, involved in the breakup.) One of these videos sparked a Twitter debate between TikTokers Mads Lewis, Nessa Barrett, and Jaden Hossler after Lewis posted her own version.

According to Seventeen, the video showed images of Lewis’ relationship with Hossler before Barrett allegedly "took him faster than you can say sabotage." She later deleted the video, calling it “immature,” but it had already made its way into the forever-files of the internet.

TikToker Indiana Massara shared a “Revenge” video as well, but hers is a little more ambiguous. The caption reads, “The way I could end them all with this challenge,” but she doesn’t say much else or explain who the “them” might be.

Massara’s fans have speculated that she’s alluding to her rumored ex-boyfriend Blake Gray and his new girlfriend, Amelie Zilber. Did Zilber take Gray faster than you can say sabotage? The world may never know.

The trend gets shadier and shadier the deeper you go into the hashtag. And all it takes is one look at the comments section to see how many people love it, with some saying they’re all about “Messy TikTok.”

Again, as Lewis noted, it’s not the best way to call attention to an ex. In this instance, the confusion between her and Barrett — which went deeper than this particular TikTok video, according to Seventeen — appears to have caused Barrett and her boyfriend, Josh Richards, to go their separate ways.

But what else do you expect from lyrics that pit women against each other? “Better Than Revenge” is allegedly about actor Camilla Belle, who dated Swift’s ex Joe Jonas in 2008. At the time, Swift was called out for slut-shaming due to the lyrics, “She’s not a saint, and she's not what you think ... She’s better known for the things that she does on the mattress.”

Years later, in 2014, Swift did admit she’d gone overboard. She told The Guardian, “I was 18 when I wrote that. That’s the age you are when you think someone can actually take your boyfriend. Then you grow up and realize no one can take someone from you if they don’t want to leave.”

It’s precisely why you might want to stick to other versions of the trend, which feature dogs and babies “taking” people away. Because if a puppy wants to stab you in the back and take your partner, they totally can — and they will.

More like this
5 Signs You Have A Toxic Relationship With Yourself
By Lexi Inks
TikTok's "Triangle Method" Technique Is The Key To Better Flirting
By Carolyn Steber
Here’s What TikTok's "Mascara” Trend Is *Really* About
By El Hunt
Here's Why Trash-Talking Your Ex Can Actually Help You Move On
By Genevieve Wheeler
Get Even More From Bustle — Sign Up For The Newsletter
From hair trends to relationship advice, our daily newsletter has everything you need to sound like a person who’s on TikTok, even if you aren’t.