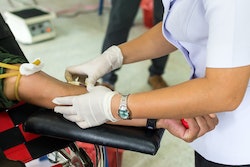 A big change to blood donations rules will come into play in the UK next year, making it easier for gay and bisexual men to donate blood.

Under the new rules, blood donors who have had one sexual partner and who have been with their sexual partner for more than three months will now be eligible to donate regardless of their gender or sexuality.

The three-month waiting period was said to “reduce the risk of any very recently acquired infections not being detected on screening and further tests.” Before 2017, the waiting period was 12 months and, prior to 2011, men who had sex with men weren’t allowed to donate blood at all.

However, on Dec. 14, a report was published by For the Assessment of Individualised Risk (FAIR) group published their research into the risks associated with blood donation. In the report, FAIR advised that health officials move away from the three-month ban and opt for a system that identifies a wider range of "high risk behaviours" which apply to all blood donors, regardless of their sexuality.

Many groups, including the Terrence Higgins Trust and Freedom to Donate, have been campaigning for this change for years. Freedom to Donate writes on their website: "It’s 2020 and it’s time to stop treating all gay and bi men as risky." They add: "Our belief is simple: those who wish to donate blood and could do so safely, should be able to."

The ban was initially introduced because of the HIV and AIDS epidemic in the 1980s, both of which are blood-borne viruses. These epidemics unfortunately gave rise to stereotypes that gay and bi men were "dirty" or "sexually risky," the effects of which are still being felt today.

Speaking about the rule change, Ethan Spibey, founder of Freedom To Donate, told Sky News “this is just huge” and expressed his delight about the rule change. However, Spibey also pointed out that "the stereotype of a gay man being dirty has had an impact" and more work needs to be done.

Dr Michael Brady, medical director at Terrence Higgins Trust, said something similar to the BBC: "There is certainly more work to do and we will continue to work to ensure that our blood donation service is inclusive, evidence based and both maximises the numbers who can donate while ensuring our blood supply is safe."