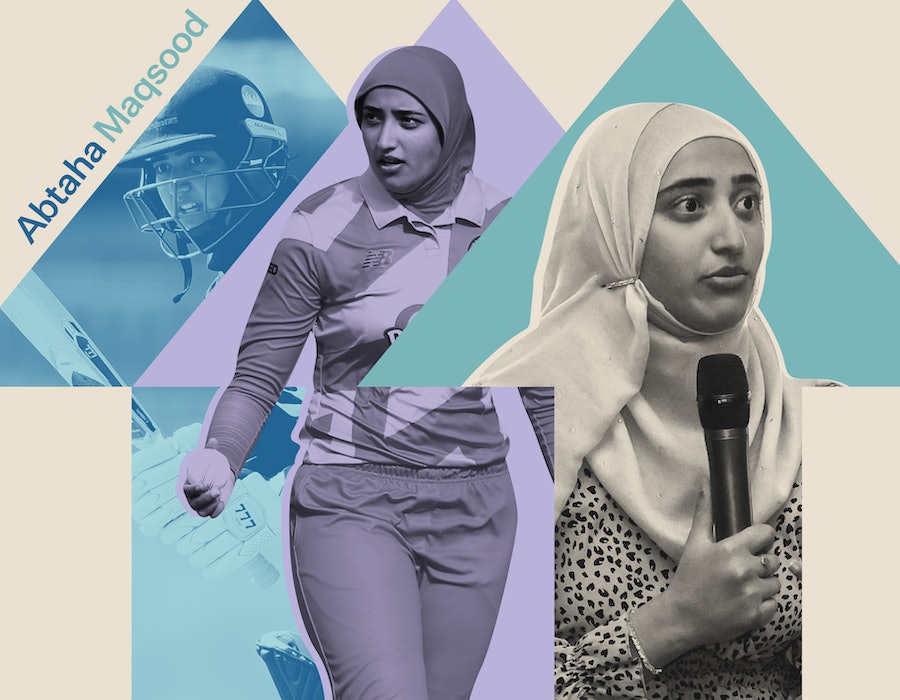 Warren Little/Getty Images
By Shahed Ezaydi
Aug. 3, 2022
The Level Up

In “The Level Up,” changemakers in the fitness and wellness industries tell us how they’re making an impact in their communities, from pushing for inclusivity to promoting body acceptance and so much more. Here, Scottish cricketer Abtaha Maqsood discusses her journey into professional cricket, her ambitions for the sport, and how The Hundred could change everything.

Ever since she can remember, cricket has been a part of Abtaha Maqsood’s world. She just so happens to be someone who went from playing in the garden with her brothers, to playing on some of the biggest pitches and most significant wickets around. At 11 years of age she was playing for the Pollock Cricket Club, and by 12 had made her U17s debut for Scotland, playing against Uganda. At 15 she was a flag-bearer for the Commonwealth Games in Glasgow, and recently had a mural painted in her honour at a primary school, but more on that later.

Now 23, the bowler will lead the attack for Birmingham Phoenix in The Hundred once more. For the uninitiated, The Hundred is a new (read: simpler, faster) cricket tournament which started in 2021, created with the aim of attracting a wider audience to the sport. Each team bats for 100 balls, and the team with the most runs wins, essentially. Joining the Phoenixes last year was “unexpected,” Masqood tells me – she was in a university tutorial when the text came through, in fact – but also “a dream come true.” As is returning this year once more.

The dentist-in-training is hailed as Britain's first hijab-wearing cricketer, a mantle that Masqood doesn’t take lightly. “I struggled to find someone who looked like me and played a sport at a high level when I was younger, someone I could really look up to and aspire to be,” she tells me. “I really hope I can be that person for younger generations.” As The Hundred kicks off (Aug. 3), I spoke to Abtaha Maqsood about her journey into professional cricket, the challenges she’s faced along the way, and her hopes for the future of the sport.

How did you initially get into cricket? And what was your experience with representation as a Muslim woman?

My dad got me into cricket when I was very young. He’s from Pakistan so he loved cricket growing up and brought that love back to Scotland with him where he taught me and my brothers all the basics. When we were kids, we all used to play together in the front garden.

I asked my parents to find me a girls’ team in Glasgow but when they couldn’t find one I ended up playing junior cricket with a team full of boys. I was the only girl, which was quite daunting for a kid, but I actually learned a lot from the experience and fell in love with the sport even more.

How did it feel to get called up to Birmingham Phoenix, and more recently, have a mural dedicated to you at a local Birmingham primary school?

I wasn’t expecting the call at all. I was shocked to see that a team in The Hundred wanted to sign me, but also so excited to get going. The Hundred was truly amazing last year, I loved every second of being part of Birmingham Phoenix and cannot wait to do it all over again. The atmosphere at Edgbaston [home of Warwickshire County Cricket Club] was just incredible.

I was also quite shocked and really taken a back when I heard that there was going to be a mural of me in Birmingham. It felt amazing to go and see it when it was unveiled. It was such a great day chatting to the kids at Marlborough Primary School and finding out about their aspirations and dreams.

I struggled to find someone who looked like me and played a sport at a high level when I was younger, someone I could really look up to and aspire to be. I really hope I can be that person for younger generations.

What challenges or barriers did you face when you were growing up and navigating the world of cricket?

Luckily, I have great parents who made sure that I didn’t face too many cultural barriers growing up. They always supported me and motivated me to be the best cricketer I could be, no matter what others may have thought or said. Unfortunately, I have still seen different comments in social media which have been pretty negative, saying that someone like me shouldn’t be playing cricket... a few Islamophobic comments as well. I haven’t taken these comments to heart though. I know I have a strong support system in my family, friends, and teammates.

How have you seen the sport grow over the past few years?

Women’s cricket has grown so rapidly. When I first started I never thought I would be able to play cricket professionally, let alone potentially make a career out of it. The number of professional female cricketers in England has increased so much in the lat couple of years and I can’t wait to see where else this progression takes us. The Hundred did wonders for the women’s game, especially. The crowds at every game were incredible and I had never thought I’d be playing in the biggest stadiums in England in front of crowds of thousands of people.

And yet cricket has faced widespread allegations of racism of late, where do you hope to see the sport in the next five years?

I just want to see the sport be as inclusive as possible. Cricket is a game for everyone and we need to make sure it’s open to all. That is something The Hundred is striving for. I would love to see more and more people from different backgrounds be involved in the sport, from grassroots to professional level.

What advice do you have for young Muslim girls who want to get into cricket or sport in general?

Never give up. There will always be narrow-minded people who tell you that you can’t play the sport you love, but those people are in the minority. There are even more people out there who will support you and encourage you to do what you love doing. You will always have ups and downs in sport, but if you stick at it, you definitely won’t regret it.