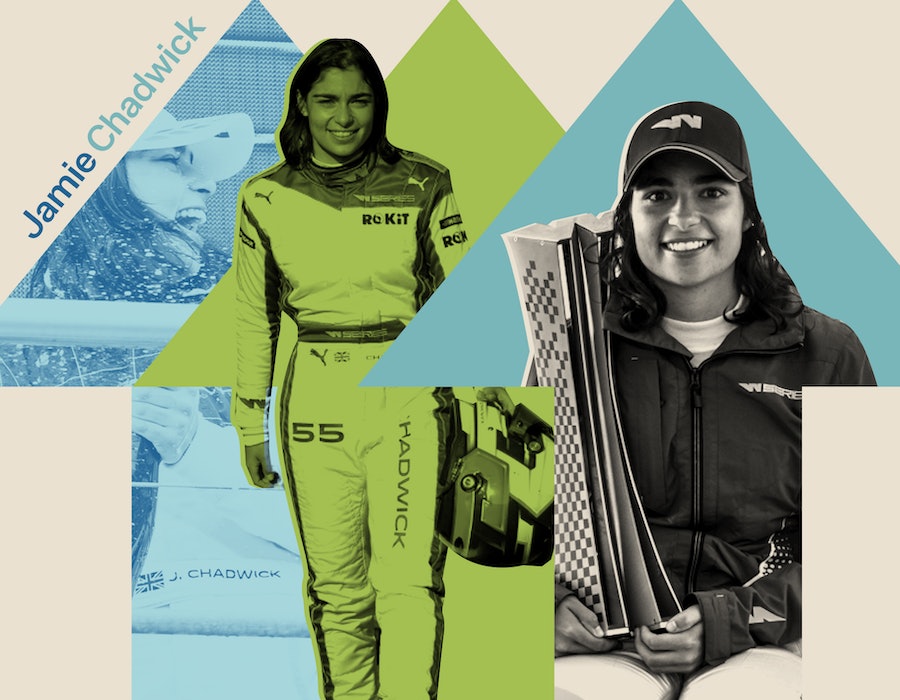 When former Formula 1 (F1) chief executive Bernie Ecclestone said in 2016 that female drivers would not be taken seriously, he obviously did not foresee the tour de force that is Jamie Chadwick. Aged 23, the Brit is achieving firsts at such a rate that she’s tipped as the first woman in years with Formula 1 potential.

Born in Bath, Chadwick’s foray into racing began in 2013, when she followed her older brother into go-karting. “I thought, I’d like to have a go at that,” she recalls. Motivated by a little bit of “sibling rivalry”, Chadwick’s career in motorsport progressed “from what was very much a hobby into something much more.”

Her first major victory in car racing was in 2013, winning the scholarship at the Ginetta Junior Championship. Then in 2015, Chadwick achieved a spectacular two wins and five podium finishes during the British GT Championship — making her the first ever female and the youngest ever champion.

“At that point, I thought this could be a career,” she says. Her victories earned her an invite to the exclusive British Racing Drivers’ Club and a place in the Aston Martin academy, with whom she was able to race at the challenging Nurburgring Nordschleife circuit in Germany — her favourite circuit to date.

Blessed with the support of her non-racing parents, Chadwick continued to climb the ranks of motorsport, switching to single seater racing and signing on to compete in the British Formula 3 Championship in 2017. That August, she won the race at Kent’s Brands Hatch circuit — in yet another first as the only British woman to win a F3 race.

Since then, she’s won the inaugural W Series (another first) and scooped the US$500,000 prize pot. She’s also joined the Williams team’s Driver Academy as a development driver. The opportunity could help make her F1 ambitions reality as the scheme has produced current F1 drivers such as Nicholas Latifi.

Chadwick spoke to Bustle over Zoom just after returning from Senegal, where she took part in Extreme E racing series. As part of the series’ aims to promote gender equality, all participating teams must have a female and a male driver who have equal responsibilities.

It’s an attempt to remedy the historically male-dominated nature of the sport, which is especially apparent at higher levels like F1. Compared to a countless number of male racing drivers, only five women have participated in Grand Prix. The last woman to take part was Giovanna Amati in 1992 — almost 30 years ago. Could Chadwick be next?

She’s certainly slated to be, which must be a lot of pressure. But Chadwick remains unflappable. She says pragmatically, “I think it’s very flattering but I’m realistic and know what I need to achieve. I don’t think I’m anywhere near F1 yet.”

She adds, “I’m very aware that I’m a role model but ultimately, what I do throughout my career is very much what I want to do. I’m doing it for myself, because I want to achieve something.”

Chadwick’s next race will be on 26 June, with the W Series in the Spielberg circuit in Austria. One of eight Grand Prix circuits where Chadwick and other female drivers can compete, as part of a new partnership between W Series and F1. The other circuits include Belgium’s Spa-Francorchamps and UK’s Silverstone.

Below, Chadwick discusses the barriers women face to entering the sport and how to start breaking them down.

Why do you think motor racing is so male-dominated?

The main thing is that motorsport is incredibly expensive to compete in — it can start at upwards of a million pounds for F2 or F3, for instance. And it's a big factor for a lot of young drivers where they're unable to find the budget or secure the backing to be able to compete in the sport. At the same time, I think the pool of talent of women racing drivers is just so small at the moment. So naturally, if you add in all the factors, then the fact that so few women filtered through to the top level of F1 in the last 40 years, is unsurprising.

Tell me about W Series and how it helped your career as female racing driver.

W series came about in 2019. It was conceived as an all-female single seater championship. It’s a free-to-enter series, so it really helped to improve accessibility of the sport for women, and it professionalised women’s motorsport overnight. In addition to that, there’s quite a substantial prize money pot. Effectively, it’s an opportunity to find talented female racing drivers out there and it gives us this platform to a learn a huge amount, be successful, so that we can go on and compete in other forms of motorsport. We get a huge amount of visibility at a top level of motorsport, so I think that it will have a powerful impact on the younger generations coming through.

Have you faced any challenges as a woman in a male-dominated sport?

I think the biggest challenge is getting into the sport. Once you're in the sport, for me, I've noticed no difference. Motorsport being male dominated, of course, there are very few women that you interact with maybe within the team. But at the same time, my experience and my sort of feeling of how I progressed — it doesn’t really feel like I'm one of a few women. Rather, I feel very much welcomed there.

How do you think we can get more girls and women interested in watching or even participating in motorsport?

I stand by the idea of improving the visibility of women in motorsport. By creating positive role models and getting women competing at the top level on merit, it showcases that motorsport doesn't necessarily have to be male-dominated. That will inspire a whole new younger generation of women to to be eager and to be keen to to get involved in the sport.

Do you have any advice for young women who want to pursue racing?

Jamie Chadwick is competing in W Series, the ground-breaking women's motor racing series, in June this year. W Series will race in partnership with Formula 1 in 2021, beginning at The Red Bull Ring, Austria, on 26 June, and Channel 4 will show coverage of all eight races across its platforms. For more information visit wseries.com