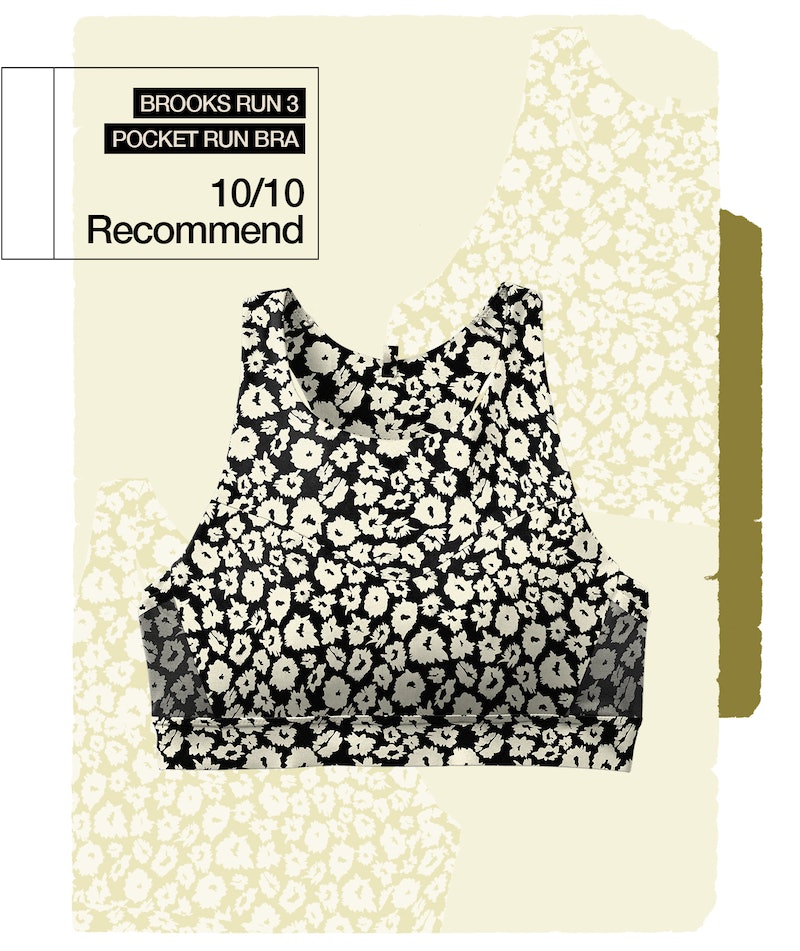 If we learned anything from the near-universal embrace of dresses with pockets, it’s that pockets are essential for women who want to carry anything larger than a credit card without having to tote around an extra bag. Given the athleisure-fication of fashion and the recent running boom, though, there’s another piece of apparel that can benefit even more from the addition of pockets: the sports bra. I’ve tried about five such bras, and the Drive 3 Pocket Run Bra from Brooks is my latest favorite.

For years, I’ve relied on skinny pockets sewn onto my leggings or shorts, clip-on or slip-on storage belts, and bulky hydration vests in order to carry everything I need with me on a run. It’s not like a I’m carrying a purse full of essentials, but I never leave the house without my phone (I use it to play music, and it’s equipped with Apple Pay, Uber, and Maps, all of which could be necessary in an emergency) and my car or house keys; plus, when I’m training for a race, I’m often carrying multiple fuel packets. Sure, that doesn’t add up to a ton of extra heft, but when you’re running long distances, even a few ounces in the wrong place can weigh you down.

What I Tried: The Brooks Drive 3 Pocket Run Bra

Last spring, after listening to me try to figure out how I’d carry my fuel and my phone in a waist belt for an upcoming marathon (the shorts I liked didn’t have pockets and vests weren’t allowed), a friend recommended I try a sports bra with a built-in pocket on the pack. I bought one, I tested it, I wore it for 26.2 miles, and now I only want to run in sports bras with pockets.

Of the five I’ve tried, my latest favorite is the Drive 3 Pocket Run Bra. It’s equipped with one big phone pocket in the center of the racerback design, plus two mesh ones on the side that easily fit items like an ID, credit card, keys, or fuel.

A sports bra is only as good as the support and comfort it provides, right? Too many women wear ill-fitting sports bras, which can affect your gait so much it could result in running an extra mile over the course of a marathon, according to a Brooks study done in conjunction with the University of Portsmouth, leading the brand to completely revamp its offerings in 2020.

Adding extra weight to your hips or lower back in the form of a phone, keys, and other items can also affect your gait which — over the course of the 1,700 steps that make up a 10-minute mile — could potentially lead to imbalances and injury. Same with overloading your shoulders, which can make you hunch over and run less efficiently. And if you’re not gifted in the gluteal department, a giant phone in a hip or back pocket is a surefire way to make your shorts or leggings sag.

Brooks’ Drive 3 Pocket Run Bra is made from swimsuit-esque sweat-wicking and quick-drying performance fabric that uses compression technology to literally compress the breasts to the body to reduce motion as you run. The nearly seamless design is available in band sizes 30-40 and cup sizes A/B to DD/E and has removable pads so subtle, I didn’t even notice them the first time I wore the bra (I immediately throw these out every time I see them in other bras). And instead of using raised stitching to secure the pockets, the pieces of fabric are laser-cut and bonded together with special textile glue for minimal seams that reduce the potential for chafing as you run.

I was also obsessed with the fact that I could stuff two fuel packets in each pocket with my car keys and a credit card and still not worry about chafing; the side pockets are just offset enough from directly beneath my arms that I never felt anything as my arms swung back and forth.

With all my essentials stashed in my bra rather than around my hips or on my shoulders, I felt faster and stronger and less distracted. What I noticed most, however, was what I didn’t feel: my belt digging into the small of my back, the seams of my vest rubbing at my underarms, the extra weight pulling at the side of my shorts. The gains may be marginal (wearing a belt or a vest ultimately isn’t going to slow you down or change your gait that much), and I can’t say wearing a certain sports bra helped me pick up the pace or made me less sore post-run, but I’m a big believer that the better you feel, the better you’ll run — and I felt great in this bra.

The first time I wore a sports bra with a pocket, I couldn’t even tell my phone was on my back. I slipped it in after I started my playlist at the start line, and didn’t think about it again for almost four hours. But I still had to wear a belt with my fuel.

The Drive 3 Pocket Run Bra, however, completely eliminates the need for a belt. I love that I can barely feel my phone between my shoulder blades, and I have an iPhone 13 Pro Max, which is literally the biggest phone you could buy and weighs in at 8.46 ounces (for the record, that’s nearly a full ounce heavier than the racing shoes I wore).

And at $50, it’s a steal. I bought Rabbit’s UtiliBRA-vo for the same price, but it only has a back pocket and I found it to be slightly less supportive; the Groundwork Long Bra from Janji kept everything in place, but it was $16 more and also only offered a back pocket. I’ve occasionally used the front pocket in Tracksmith’s $66 Allston Bra, but it’s not exactly comfortable stuffing a heavy iPhone down there. Sports bras can cost you anywhere from $15 to more than $100, and I’m happy to pay $50 for a high-quality bra with extra functional features.

The Brooks Drive Drive 3 Pocket Run Bra manages to fit three storage spaces on one of the smallest strips of fabric you’ll ever put on your body — and it does so without making any other part of that piece of apparel feel less comfortable. It’s a reminder that everything’s better with pockets, especially functional fitness clothing that makes working out feel easier and more efficient. And when you feel good, you run good. If a sports bra can do that, I’ll take one in every color.

Since I started running in 2016, I’ve run 10 marathons (I’m currently registered for numbers 11, 12, and 13). As a health and fitness journalist and an RRCA- and UESCA-certified running coach, I regularly test all kinds of gear, from sneakers and apparel to wearable tech and, yes, sports bras. I’ve done some formal testing with different brands to learn more about different bra technologies, but most of my experience has come from trying bras on my own runs.