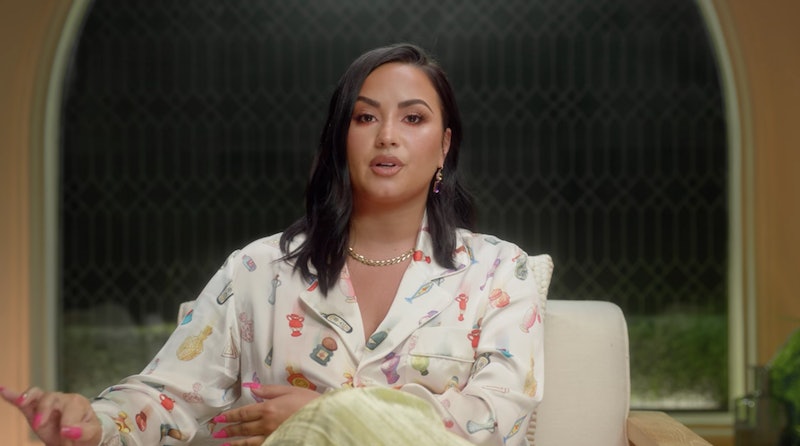 In Demi Lovato’s March 2021 YouTube docuseries Dancing With the Devil, the singer described themself as “California sober” — meaning, in their own words, they still drank and used cannabis “in moderation.”

“I’ve learned that it doesn’t work for me to say that I’m never going to do this again. I know I’m done with the stuff that’s going to kill me, right?” Lovato shared in the series, which dug into their 2018 near-fatal overdose. “Telling myself that I can never have a drink or smoke marijuana, I feel like that’s setting myself up for failure.”

In the context of recovery, “Cali sober” refers to someone who “abstains from ‘hard drugs,’ such as heroin, cocaine, or methamphetamines but may continue to use marijuana or psychedelics on occasion,” according to Antonio Ruberto, who oversees substance use treatment and recovery support at the LGBT Community Center in New York City.

The term “Cali sober” can evoke strong feelings among those who are sober. The interest in Cali sobriety as a lifestyle picked up at the beginning of 2020, per Google Trends data, following on the heels of the “sober curious” movement, which gained traction around mid-2019. (People who are “sober curious” may not have a substance use disorder but take steps to drink less anyway, which can include continuing to smoke pot.) When the docuseries first aired, many criticized Lovato for using the phrase because in traditional recovery communities, the norm is that people with substance use disorder practice total abstinence from all substances in order to avoid a relapse. And Lovato themself ultimately decided to go sober-sober, saying in a Dec. 2 Instagram story that they “no longer support” their previous California sobriety.

This change reflects experts’ concerns about the phrase. Speaking about Lovato’s initial comments, Ruberto says that “Cali sober” can oversimplify the complexity of each individual’s experience of addiction; it can “provide an ‘out’ for individuals from having to thoroughly explore their substance use.”

Isabel, 23, who is in recovery herself, put it bluntly at the time of Lovato’s original announcement. “The cutesy term [‘Cali sober’] gestures to this glamorous, idyllic notion that one can be sober without actually having to abstain from substances or alter their lifestyle in any way,” she says.

Still, for some people in recovery, the term “Cali Sober” can be a way to make sobriety more approachable. Lucas, 32, a recovering alcoholic who uses cannabis for their disability, says they don’t have an issue with Lovato calling themself “Cali sober,” but fear it having unintended consequences. Referring to what Lovato said in the documentary, Lucas says, “My concern is that this’ll invite mockery, both to Demi and others [in recovery]” by encouraging others to trivialize sobriety or make light of substance use, “and that this will close the conversation on the reality that recovery and sobriety mean different things to different people.”

At the same time, some say the concept can open the door to a more nuanced conversation around sobriety. “My impression of Cali sober was just you don’t drink but you smoke weed,” Phoenix, 31, says. Regarding Lovato’s initial statements, they say, “It seems like what [Lovato’s] going for is more like moderation.”

“Recovery is not one-size-fits-all, and we have to do what best allows us to survive,” Isabel says, adding that Lovato’s initial comments encompass a practice called harm reduction, or minimizing bad consequences of substance use, like criminalization over solely focusing on avoiding drinking or drug use itself.

Ruberto affirms that sobriety and harm reduction don’t have to be polar opposites, though the center does employ an abstinence-based model in its recovery program. Rather, they are “two ends of a spectrum of possibilities for a person to reach a relationship with substances that is healthiest for them.”

Before the start of the COVID-19 pandemic, Isabel attended AA meetings daily; when she lost that structure, she says, she was “terrified” she would relapse. In the months since, Isabel has appreciated being able to create a recovery plan outside of AA, pulling away from binary thinking around sobriety, though she says she still engages in “total abstinence.”

“Sobriety, and recovery, is a lot more than just not doing drugs and drinking,” Isabel says. “I wish [sober people] held more space for those who either are not ready to quit using substances entirely or have no plans to do so at all.”

For Phoenix, AA was the start of their recovery process. “It was really important to be in spaces [like AA] where I didn’t feel judged,” they tell Bustle. But they found other people in the program to be “judgmental about drug use in general, specifically about smoking weed. It’s very looked down on, like, ‘You’re not really sober.’ And after a certain period of time, it felt like I couldn’t go to those meetings without basically lying by omission.”

Phoenix stopped attending meetings after two years; they haven’t had a drink in five. But rather than identifying as “sober,” Cali or otherwise, they prefer the term “in recovery.”

“Because I think that that will always be true, no matter what I’m using or not using,” Phoenix says. “It’s very much a process I don’t think ever really ends.”

This article was originally published on April 6, 2021