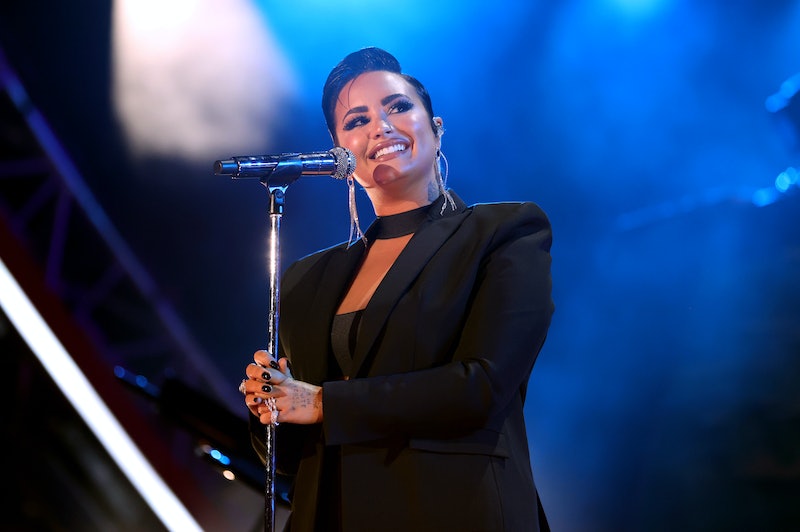 Demi Lovato has taken another step in their sobriety journey. On Dec. 2, Lovato announced that they’re no longer “California sober,” clarifying that they’re “sober sober” now and renouncing the controversial approach to sobriety. “I no longer support my ‘California sober’ ways,” Lovato wrote in an Instagram Story. “Sober sober is the only way to be.”

What is California sober? Kyara Beck, an internationally certified advanced alcohol and drug counselor at the addiction recovery facility TRIAD, previously described “Cali sober” to Bustle as such: “This is the laid-back sober, the I’m not doing any hard stuff; I’m just smoking weed. It’s a version of harm reduction that favors alternatives like cannabis,” Beck said. “The person works with a counselor, therapist, psychiatrist, or whomever to gain emotional sobriety and no longer drinks dangerously or does anything more physically and psychologically addictive, like opioids. Instead, they might have one beer at a wedding or smoke some weed if they’re feeling anxious.”

In March, as part of the YouTube docuseries Demi Lovato: Dancing With the Devil, Lovato revealed that they drank alcohol and smoked marijuana in moderation, but stopped using “stuff that’s going to kill me” after their near-fatal 2018 overdose. “I’ve learned that it doesn’t work for me to say that I’m never going to do this again,” they said at the time. “Telling myself that I can never have a drink or smoke marijuana, I feel like that’s setting myself up for failure because I am such a black-and-white thinker. I had it drilled into my head for so many years that one drink was equivalent to a crack pipe.”

In an interview with CBS Sunday Morning, the “Cool for the Summer” singer said “California sober” was the term they felt most comfortable using to describe their sobriety, but cautioned that their approach was not for everyone. “I really don’t feel comfortable explaining the parameters of my recovery to people, because I don’t want anyone to look at my parameters of safety and think that’s what works for them, because it might not,” they warned.

Lovato even wrote a song about being “California Sober” and included it on their 2021 album Dancing With the Devil: The Art of Starting Over. “Tired of being known for my sickness / It didn’t work, I’m trying something different,” they sing in the song’s first verse. “I’m California sober, it doesn’t have to mean the growin’ part is over / No, it ain’t black or white, it’s all of the colors that I only just discovered.”

Lovato did not explain what made them backtrack from being “California sober.” The modern approach to sobriety has caused controversy among some addiction experts and people in recovery, including Vanderpump Rules star Lala Kent and trauma professional Ken Seeley, who called the method “almost criminal” to Entertainment Tonight. Even Elton John, who celebrated 30 years of sobriety in July 2020, vocally disapproved of his friend’s choice in Lovato’s docuseries. “Moderation doesn’t work,” he said. “If you drink, you’re going to drink more. If you take a pill, you’re going to take another one. You either do it or you don’t.”

Thinking about sobriety? Here are some online programs and resources:

Editor’s Note: If you or someone you know is seeking help for substance use, call the SAMHSA National Helpline at 1-800-662-HELP(4357).

More like this
Phoebe Bridgers Shares Her Abortion Story Amid The Leaked Roe v. Wade Decision
By Jake Viswanath
Britney Spears & Sam Asghari Announced Their “Devastating” Pregnancy Loss
By Stephanie Topacio Long
Cardi B Explains To David Letterman Why She Uses Her Star Power For Politics
By Jake Viswanath
The Very Best Quotes From Dr. Taylor Swift’s NYU Graduation Speech
By Grace Wehniainen
Get Even More From Bustle — Sign Up For The Newsletter