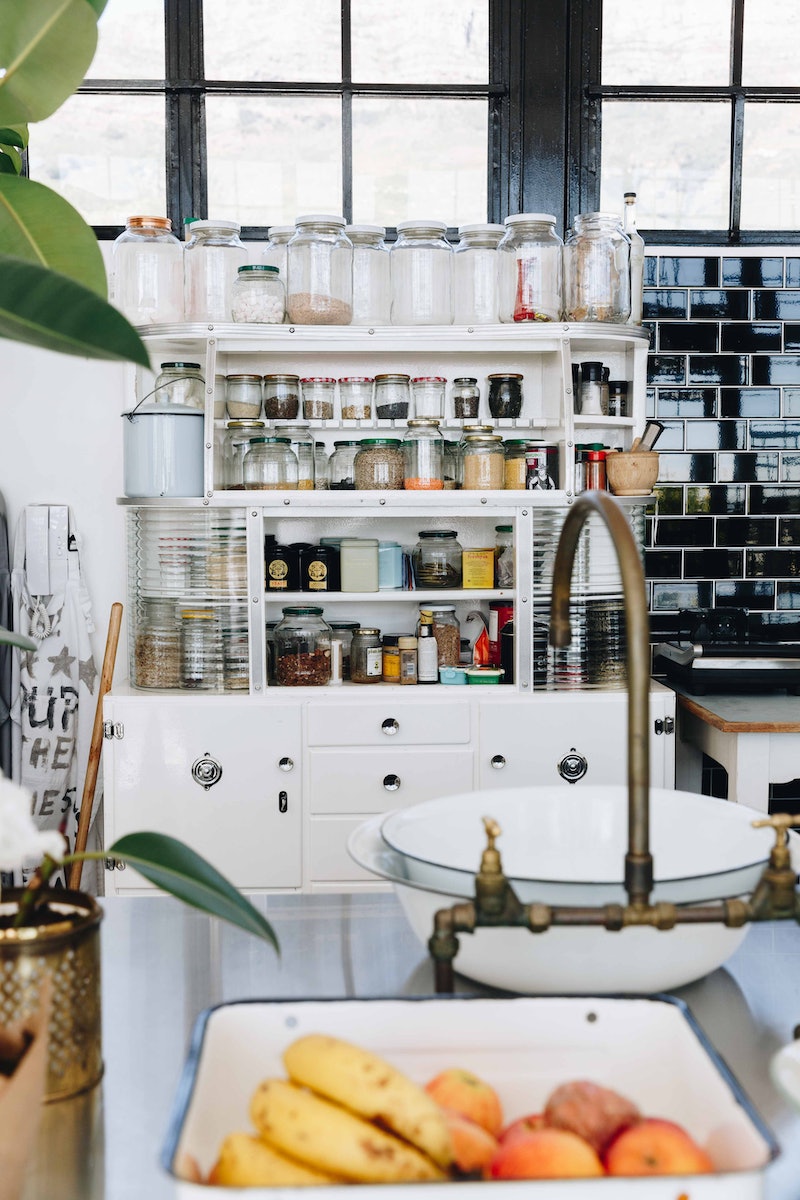 Hanging out at home for the past six months may have inspired you to try your hand at KonMari'ing, or adopting a new home organization system from The Home Edit (or TikTok). But if you look around right now, you might notice that that didn't quite stick. Good news: you're not a failure if you are not able to keep your quarantine-inspired home organization system in place, you're just human. If you're constantly asking yourself why you can't stay organized, know that it's unnatural to keep things as clean and neat as a package-free boutique, experts say. For many people, extreme organization doesn't actually make your life easier, and right now people want easy — even if they are enticed by the idea in a time of disarray.

"Our environments are a physical representation of our lives. When we are in chaos, so are our homes, work spaces and cars," therapist Kate Ecke, L.C.S.W., tells Bustle. "Some people use organization as a way to gain back control over their lives."

Cleaning and organizing can be calming activities for some people, as it gives them an opportunity to implement order, and quite literally burn off some steam — dealing with a mess can be a serious workout. Others are just as satisfied watching a video of someone cleaning, or watching a home organizational show, without lifting a finger in their own homes. It's undeniable that there are positive therapeutic effects, but why is it so hard to keep up with a deep clean?

According to Ecke, it's the same reason why some people get excited about going to the gym on January 1, but then lose interest by February. "You get an initial burst of energy when you first put things in order, but people don’t follow through if they don’t value it," she says. "The initial 'high' of a clean house triggers the reward center in our brain," she says, adding that she often gives her patients who live with depression an assignment to pick an area of their home like a closet and clean it. "They often find that their mood improves by doing a task like this," she says. "We then work to help them maintain it through small acts, like emptying the dishwasher, or doing a load of laundry rather than a whole house overhaul because that is not sustainable."

"My pandemic deep cleans last about a week," Ellie, 29, tells Bustle. "I think it's because I don't have the systems in place to support a de-cluttered environment. Like, that's not my life, I don't put a lot of value in returning things to where they came from on a daily basis," she says.

Organizing isn't just about chasing a cleaner's high. According to psychotherapist Kelly Keck, L.M.H.C., it can actually help with self-esteem. "I think there is a sense of satisfaction or a promise for progress if a space is considered organized," she tells Bustle. People who enjoy the act of cleaning, and who value a pristine space, are more likely to hold onto their clean slate. But people who are cleaning from a state of mess don't have that built-in attachment to order, and might feel bad about themselves if they can't keep up with it.

"After my initial quarantine cleaning frenzy, I've been intentionally avoiding deep cleans because it just stresses me out to try to keep up with it," Lindsay, 30 tells Bustle. "Now, I make it fail-proof and just tidy up my messes and light a few candles once a week and feel much better about it," she says.

"No matter what type of person you are, I think the look and feel of a clean space is only momentarily satisfying and then the moment wears off" Keck says. "It's wonderful that some people thrive in that but others like their organized chaos and that shouldn't be changed due to the latest trend."

As for whether or not people will keep up with their jar-labeling and wicker box organizing of quarantine, Keck says many will probably return to their old habits of messy living. "Control can be an elusive idea, and while it feels good to master that control over your environment, after a while it doesn't feel like enough."

If you want to hold onto a cleaning habit you've recently acquired, family therapist Dawn Friedman, M.S.E.d., says focusing on small changes is the key to clean. Instead of vowing to keep your whole home clean, Friedman says to focus on changing a habit, like throwing hot sauce packets into a junk drawer. Find a place for the packets, and vow to always put them there. "That tiny little junk drawer requires a lot of change. It requires cleaning it out but it also requires making a plan for all the things that get shoved in there," she says. Otherwise, you will always end up where you started.

"Checklists can help because it's easier to have a piece of paper to remember all the details so you don't have to," she says. That said, Friedman adds that clean is not synonymous with good. "There is nothing wrong with having a junk drawer or letting things get messy and then cleaning them," she says. "Keeping things picked up is a system and letting things get messy and then doing a big sweep is also a system. One is not better than the other so you get to decide which you'd rather."

More like this
All The Muscles You Work When Doing Deadlifts
By Carolyn Steber
These Are The 3 Most Mellow Zodiac Signs
By Kristine Fellizar
16 Home Gift Ideas For The Friend Who Loves To Throw A Party
By Alexis Morillo
I Visited Remedy Place, The Social Club Transforming The Wellness Industry
By Rachel Lapidos
Get Even More From Bustle — Sign Up For The Newsletter