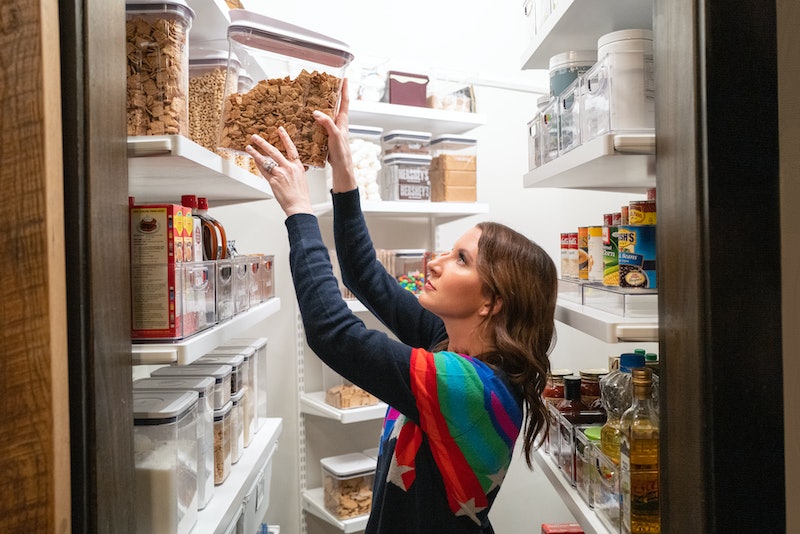 Whether you're a new fan of the mesmerizing organizing montages of Get Organized With The Home Edit, or you're a longtime devotee of clean-up content in general, you have psychology to blame for the obsession. Can't stop watching cleaning and organizing videos? Experts say it's not because you're a secret neat freak — it may be a sign you're overwhelmed in other areas of your life. (Plus, these videos are just straight-up soothing.)

As the real-life version of Pig Pen, my interest in watching content that features scrubbing, dusting, color-coordinating and bulk jar labeling has nothing to do with my own level of cleanliness. My bathroom is chaos, my keyboard is filled with crumbs, and dresser drawers are a free-for-all — stag socks tango with inside-out yoga pants. And yet, I love the feeling I get watching someone else clean their home.

Cleaning videos have been trending on YouTube long before high-production-value shows made their way to Netflix. Vloggers figured out that a time lapse pick-up session set to a cheerful soundtrack is an easy win with viewers, as many of these videos have over a million views each. TikTok has its own subset of cleaning fanatics called Clean Tok, where videos with hashtags like #cleanwithme, #cleaningtok, and #organizeit have amassed billions of views. The combination of gentle noises, repetitive motions, and dirty-to-clean transformations captivate viewers and spark psychological delight.

Shows like The Home Edit and Tidying Up with Marie Kondo feel clean through their packaging alone. The formula is predictable: a mess, followed by a solution, followed by a dazzling reveal. TikTok cleaning videos are a little less formulaic, but they still hinge around a transformation. Crucially, they scratch a relatable itch: anyone can do this.

For people who are stressed out or even dealing with depression, this is especially appealing, says therapist Caroline Given, LCSW. "To see someone finally throwing away their to-go cup graveyard and putting away piles of clothes is aspirational because we’re getting visual access to an inner healing that is beginning to take place, which is inspiring," Given says. On TikTok many videos with the caption "cleaning my depression room" have gone viral, not only because they make viewers feel happy for the creator who is making a positive change, but because that change can be contagious.

"At a basic level, cleaning is behavioral activation, a therapeutic technique that has been well documented to improve symptoms of depression," Given says. "Behavioral activation involves the completion of specific, measurable tasks to build momentum and confidence," she adds, explaining why being inspired to clean up is far more powerful than being inspired to, say, renovate a home. Whether you're living with depression, feeling overwhelmed by the effects of the pandemic, or just out of sync with your chore game, this kind of content can create a sense of optimism, Given says.

According to Ronda Kaysen, the co-author of The New York Times Right at Home: How to Buy, Decorate, Organize and Maintain Your Space, America's interest in these videos is a direct result of what the country has been going through. "The rise of these shows has happened in the last four years, during a tumultuous time that's been unsettling for people," she tells Bustle. Politically, and with the pandemic, people may be feeling helpless. "They are wrestling for control over their possessions and their life when they don't have much control over anything," she says. In the beginning of the pandemic, cleaning and organizing became even more important to people, she adds. "Home was the only safe place and the outside world was literally untouchable — the urge to tidy is so satisfying."

According to Kaysen, the country's underlying interest in this kind of content and behavior is rooted in consumerism, whether they know it or not. "We are hunters and gatherers, fueled by capitalism, and right now, due to the pandemic, we are nesting," Kaysen says. "We are stuck in an endless cycle of having too much, going through it, and then giving it away, and that cycle is satisfying." Though this type of entertainment might be enjoyable to watch, the effects are not lasting, just in the same way that cleaning your own home doesn't last, Kaysen says. "Consumerism is about abandon — it feels good to get new things, but then things make you feel out of control because you have no where to put them, so you regain that control by cleaning and organizing — they cycle goes on."

Experts agree that cleaning and organizing is both physically and mentally stimulating, and if watching reality TV or TikTok helps you get there, more power to you.

Ronda Kaysen, co-author of The New York Times Right at Home: How to Buy, Decorate, Organize and Maintain Your Space