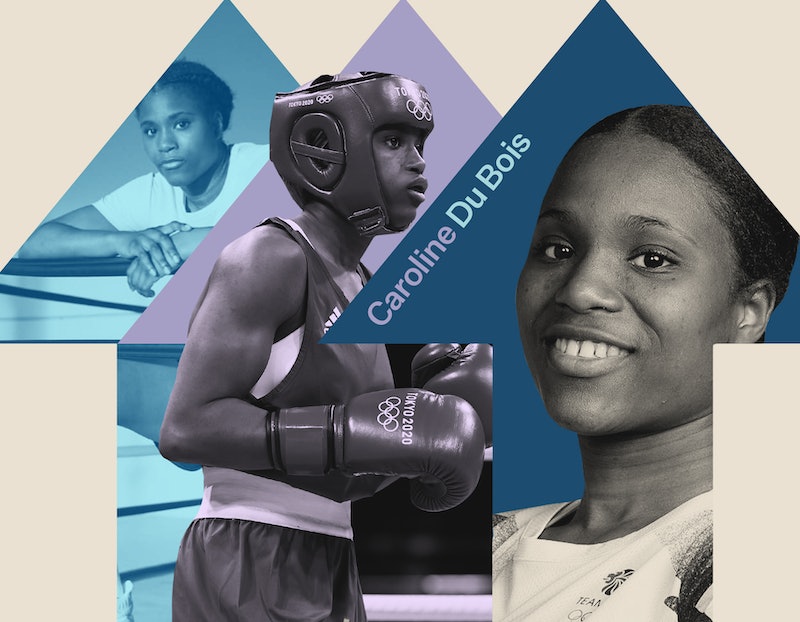 In “The Level Up,” changemakers in the fitness and wellness industries tell us how they’re making an impact in their communities, from pushing for inclusivity to promoting body acceptance and so much more. Here, boxer Caroline Dubois discusses her journey so far and how her sport can become more inclusive.

Boxing was by no means a straightforward career choice for Caroline Dubois. As a child growing up in London, she tried a lot of different sports – running, swimming, and gymnastics – all of which were regarded as suitable for a young girl to be interested in. But none of them felt quite right. “There was nothing really drawing me in, making me feel like ‘This is it, this is my thing,’” the athlete tells me.

Watching her older brother Daniel compete in boxing tournaments and return home with big medals was what sparked her interest at age 8. “I kept pestering my dad, asking if he could take me to a boxing club,” Dubois, now 20, recalls as we chat over Zoom. “Finally he relented and took me to the gym for the first time.” After one session, she was hooked. “I thought, ‘Why would anyone not want to box?’”

She knew almost immediately that she wanted to turn her passion into a career. The only issue was that, at the time, girls and women were excluded from boxing clubs around the capital. Determined to receive the same quality of training as her brother, Caroline posed as a boy named Colin to train at Repton Amateur Boxing Club and eventually found the confidence (with the help of her dad) to fight as herself.

Ahead of her first professional match on February 5, I spoke to Dubois about her journey to the top (she recently competed in the Tokyo Olympics having already got a Youth Olympic Champion title under her belt), her thoughts on being a role model, and what can be done to make boxing more inclusive.

You posed as a boy when you were younger to get into certain boxing clubs. Can you tell me about that experience?

The first club I went to was an ameteur boxing club, and many clubs back in the day never allowed girls to box. My dad took a chance and decided to take me down to Repton Boxing Club, thinking maybe I’d try it but not enjoy it. When I was there, we had to pretend I was a boy. But the third or fourth time I went, I started sparring, and I ended up making a boy cry. From that day onwards, my dad stood by me. Any club we went to, he would say “She’s a girl and she’s amazing, just watch her. If you don’t like what you see then we’ll leave and go to another club”. And he’d tell me, “If they don't allow girls, I’m going to stay with you and push them to make sure they let you play.”

I later went to Dale Youth Boxing Club, where I met the coach Gary Miguinness. He said “she won’t be able to keep up, she can’t spar with the boys.” I went in the ring and showed him and, after that, my name got around a bit, encouraging people to give me a chance to see how good I was. No one really said anything after that and, once I was winning titles, I was accepted. The boxing clubs want national champions, people who can win and perform – and they definitely saw that with me.

Boxing for women in the UK as a sport was illegal until 1998. Do you feel like growing up you had role models you could relate to in the boxing world?

Most of my role models in the beginning were men. Sugar Ray Leonard, Marvin Haggler, Mike Tyson, Lennox Lewis. All male fighters but so good that I respected them nonetheless. As time went on, in the 2012 Olympics – the first time female boxing was allowed – there was Claressa Shields and Katie Taylor. Claressa I can relate to. I love her story and that she’s been herself and not cared if people like her or not. That’s who she is. Growing up, there was no one that looked like me in the gym, no one who was anything like me. I took a lot of motivation and inspiration from Claressa because her story is like my story – she was me growing up.

You may also be a role model as well now for the next generation of female boxers.

It’s a responsibility I need to take in my stride. I won’t change the way I am and the way I speak or my approach, but just be myself and, if that’s what people like, then hopefully I’ll inspire them through actions and not through words.

How do you feel boxing as a sport can become more inclusive for women?

Time, I think. As we see more female fighters on the telly, putting on big shows and performing in the ring, putting on great fights that people are still speaking about months and years later – that’s going to make people realise that boxing is an option for their daughters. It doesn’t have to only be running or gymnastics, it could be boxing as well.

We’ve seen in the last several months a few Black female athletes in particular pioneering positive mental health in sport. Is this important to you as an athlete?

The body is only as strong as the mind. It's important to look after yourself and have people to talk to, support you, and be there for you at your lowest as well as your highest. In boxing, the strongest or quickest or fastest or fittest person doesn’t always win. It’s the person that has a balance between all of it: fitness, strength, power, skill, brains, boxing IQ. There's a fine line and you need to be very even in all of them to always be on top.

What was it like competing in the Tokyo Olympics last summer?

The Olympics was a great tournament, very challenging and competitive. It’s something I will always remember. I can say, “I did that, I went, I qualified.” Obviously things didn’t turn out the way I’d have liked – I remember I got out of the ring after losing and couldn’t stop crying it was the worst pain I’d ever felt. But it taught me that, even at my lowest point, I could pick myself up and just keep moving forwards.

You’re due to have your first professional fight on February 5. Do you think it will feel different competing on a professional level?

I don’t know, I’ve already asked some other people who’ve gone pro how does it feel boxing in front of hundreds of thousands, or boxing without a head guard. They told me I’m going to love it. I’m excited for it and I'm getting ready as much as possible, I cannot wait to start.