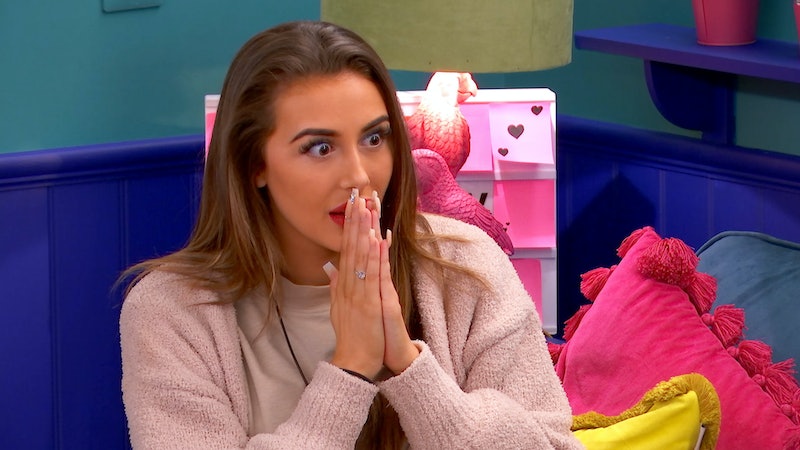 In the internet age, nearly everybody has some kind of catfishing story — a paramour on a dating app who turned out to be an entirely different person, an aunt duped by handsome photos, some pre-teen bullies pretending to be somebody’s crush over Snapchat. Catfishing, where a person assumes an entirely different identity online to befriend or romance others, first became a mainstream term in 2010, when a documentary by Nev Schulman revealed that the woman he’d been romancing online for months was in fact an older woman using photographs of a model. Now, shows like Catfish UK and The Circle are built around the effects of playing another person online, and reports suggest that catfishing may have risen during the COVID pandemic, with people restricted from face-to-face meetings. Experts tell Bustle that the psychology of catfishing reveals a lot about the brain, from the impact of betrayal to the realities of pathological liars.

The Psychology Of Catfishers

It can be hard to get into the brain of a catfish, but research can help. A study published in Sexual & Relationship Therapy in 2020 found that men are more likely than women to be catfishers, and that people who had anxious attachment styles — meaning they found it hard to feel secure or loved in a relationship, and needed reassurance and attention — were more likely both to catfish and be catfished.

An investigation of 27 catfishers by researchers at the University of Queensland also found that they were motivated by loneliness, struggles with social connection, dissatisfaction with their bodies, a desire to escape, or a need to explore aspects of their gender or sexual identity. While some were wracked with guilt and wished to confess, others said they started doing it for a practical reason, like getting access to an age-restricted website. Media stories about catfish often revolve around monetary gain, but these people didn’t really fit that stereotype; they exploited the trust of others for psychological reasons. Scientific American also notes that catfish can be motivated by a phenomenon called the “online disinhibition effect,” where online anonymity makes people less likely to adhere to the moral codes they use in real life.

Lying repeatedly can change the brain gradually, too. “We learn to lie over time by the way it rewards or punishes us,” neuropsychologist Dr. Sanam Hafeez Ph.D. tells Bustle. “Researchers have also found that the part of the brain, the amygdala, that would otherwise send out guilt signals, stops responding when a liar becomes a natural at deceiving.” That means they don’t feel discomfort about lying, whether they get caught or not.

What Being Catfished Does To Your Brain

If you discover that the cottagecore angel you’ve been falling for on Snapchat is in fact a total illusion — and using your trust for their own gain — you’ll likely feel completely shattered. And your brain will reflect that. “When we are betrayed, our brains show an elevation in stress, likely an overproduction of stress hormones to combat this perception of an 'attack', hypervigilance, and anxiety,” Dr. Hafeez says.

A partner revealed to be a catfish can also alter brain activity in the future. “Our brains have set paths that help us to operate, with thousands of automatic thoughts and assumptions every day,” Catherine Richardson LPC, a Talkspace therapist, tells Bustle. “When it comes to relationships, if there has been trust, we assume there will continue to be trust, until that trust is broken.” Being catfished, she says, may create new brain pathways that cause people to distrust what that person, and future partners, say and do. That can make people more vulnerable to paranoia and pessimism.

“Our brains are wired to seek out people who will protect us from harm, and when we are betrayed, this cycle is disrupted,” Dr. Hafeez says. People who are prone to anxiety or depression may be more deeply impacted by the trauma of catfishing, she says, and the continual suspicion of others may be harder to heal.

How To Heal From Being Catfished

“In order to heal from a betrayal, you first have to name the feelings that are coming up,” Richardson says. These could be hurt, anger, confusion, or other emotions. It can be a long process to heal from catfishing, but Richardson recommend that people use some self-reflection alongside anger, including asking themselves honestly about warning signs that they didn’t notice or ignored.

“These questions are not meant to shame you but to help you grow,” she says. “Being lied to is devastating in any situation, but you can use the experience to learn more about yourself and how you interact with others.” Anybody who’s struggling with the after-effects of catfishing can also seek professional support from a therapist, who can help them learn to trust again.

More like this
5 Signs You Have A Toxic Relationship With Yourself
By Lexi Inks
Here's How Often You Should Stretch To Improve Flexibility
By Carolyn Steber
The 11 Benefits Of Aerial Yoga, According To Trainers
By Carolyn Steber
The Secret To Mastering Crow Pose In Yoga
By Carolyn Steber
Get Even More From Bustle — Sign Up For The Newsletter
From hair trends to relationship advice, our daily newsletter has everything you need to sound like a person who’s on TikTok, even if you aren’t.