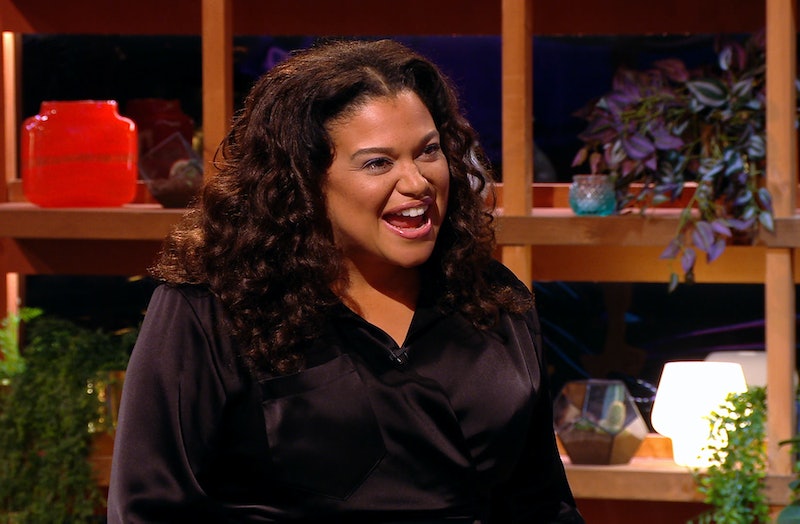 When Netflix’s hit reality series The Circle premiered on Jan. 1, 2020, its concept seemed otherworldly: a group of strangers, isolated in their own pods, only able to communicate through social media. But three months later, as the COVID-19 pandemic sent us all into quarantine, the plight experienced by The Circle’s thirteen contestants became all too relatable. Of course, we received delayed stimulus checks instead of a $100,000 grand prize — but that’s beside the point.

Just a couple of months after Season 1 aired, Netflix announced that the show was set to return for two more seasons. On March 23, 2021, the platform announced the Season 2 premiere date, which will quickly be followed by Season 2 of one of its other social distancing-focused reality shows: Too Hot To Handle. (Keep reading for details on a crossover between both series!) While you get ready to meet a whole bunch of new contestants, here’s everything we know about The Circle Season 2 so far.

How The Competition Works

If you’re new to The Circle, don’t worry — its concept may be wild, but it’s easy to grasp. Hosted by comedian Michelle Buteau, the series’ contestants move into an apartment building where they live in separate units and cannot see each other face-to-face. Viewers get to watch each cast member firsthand, but they can only text message through a social media platform created specifically for the show when communicating amongst themselves. That means contestants can catfish the others if they choose. After each conversation, contestants rank each other from first to last place, and the two people with the highest rankings become “influencers” for that episode and are granted the ability to “block” other players.

Of course, there are twists and turns throughout the show, but generally, a blacked player is eliminated at the end of each episode. After being let go from the competition, they’re able to meet another player of their choice face-to-face, and the next day, the eliminated player’s identity is revealed to the rest of the cast. At the end of the season, the highest-rated player wins a $100,000 prize, and a fan-favorite contestant wins $10,000. Season 1’s winner was 25-year-old Joey Sasso from Rochester, New York, who played using his own identity the entire time. The fan-favorite prize went to contestant Samantha “Sammie” Cimarelli, who played as herself but pretended to be single, which clearly paid off.

Will Lance Bass Be On The Circle?

Considering how the competition unfolded last season, it’s expected that five new players will join The Circle in addition to the eight contestants announced in Netflix’s Season 2 trailer, which dropped on April 5. Midway through the trailer, contestants are shocked to see a new profile appear for Lance, a 41-year-old “entertainer” from Los Angeles who will join the competition. Based on the profile’s photos and biography, it appears that the new player is none other than Lance Bass, ex-member of *NYSNC, and the rest of the cast is starstruck — except for one woman who claims to have never heard of the ultra-successful boy band.

Of course, the profile that appears to belong to Bass could simply be another contestant catfishing as the celebrity, but you’ll have to tune into Season 2 to find out.

In Netflix’s announcement on March 23, the streaming service detailed the first twist of Season 2. Sorry to those who prefer to marathon-watch, but this season will have a different rollout than the last. Rather than dropping all thirteen episodes at once, Season 2 of The Circle will premiere the first four on Wednesday, April 14. Then, the rest of the episodes will roll out over the next three Wednesdays: four more episodes will air on April 21, and another four will arrive on April 28. Finally, the Season 2 finale will air on May 5 — but don’t fret. Just a few weeks later, Netflix will debut Season 2 of Too Hot To Handle and air the rest of it over the following Wednesdays that month, so your craving for more competitive reality TV will be more than satisfied.

On May 5, The Circle Season 2 came to an end, and it was truly a wild season. Not only did Lance Bass turn out to not be Lance Bass, but the woman who catfished as him (his assistant Lisa) was eliminated yet still made it to the finale as another catfish. Ultimately, though, the person who came out on top was Trevor, aka Deleesa, who FaceTimed her husband and daughter right after securing the life-changing $100,000.

More like this
'That '90s Show' Star Callie Haverda Got Advice From Mila Kunis & Ashton Kutcher
By Brad Witter
Here’s Why Danny Masterson’s Hyde Isn’t In 'That '90s Show'
By Brad Witter
Everything To Know About 'RHONJ' Season 13
By Brad Witter and Jake Viswanath
'Bling Empire: New York’ Star Tina Leung Has A Superhero Alter-Ego
By Alyssa Lapid
Get Even More From Bustle — Sign Up For The Newsletter
From hair trends to relationship advice, our daily newsletter has everything you need to sound like a person who’s on TikTok, even if you aren’t.