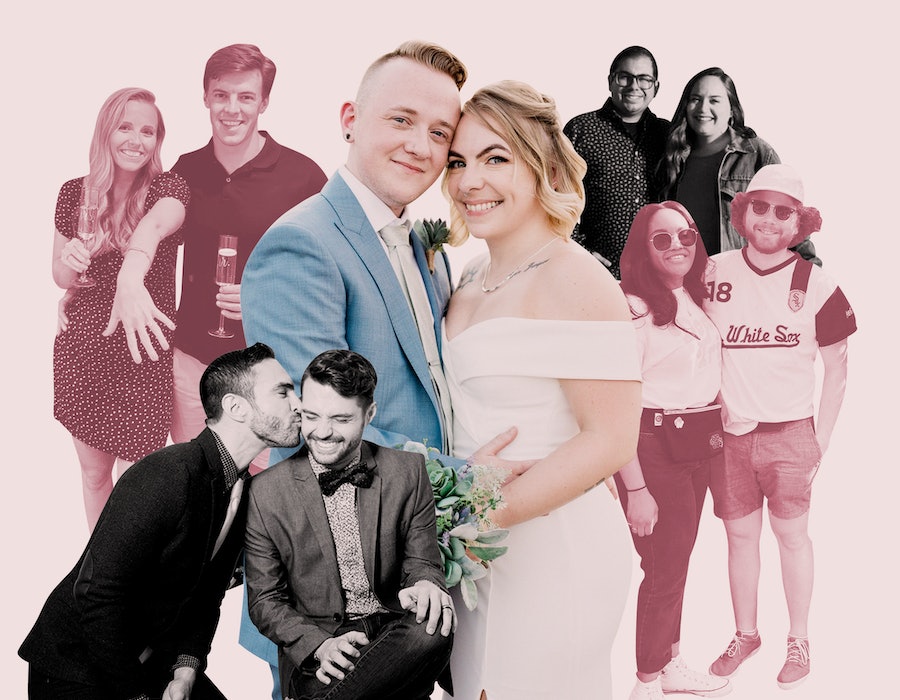 First comes love. Then comes marriage. Then comes a global pandemic altering everyone's five-year plans. Amid the uncertainty of COVID-19, long-term couples are rearranging their lives and reimagining their futures. With unemployment rates skyrocketing and the housing market in disarray, partners are changing jobs, cities, and relationship statuses. As 2020 continues to be the year that no one envisioned, these couples are adapting to the uncertainty. From last-minute moves to pandemic proposals, here's how five couples are living right now, happily out of order.

Aneesah & Jack Went From Long Distance To Living Together

Before the pandemic, Aneesah, 26, and Jack, 27, were preparing to spend the next few years apart. The pair met in grad school in Chicago and started dating in 2018. But Jack got a job in Colorado and planned to move across the country in April 2020.

"The idea was that she would finish school in Chicago then eventually make her way here,” Jack tells Bustle. “Then we would figure out if we would move where Aneesah was accepted to a Ph.D. program or if there was a mutual place where we both could find work and a good school.”

When Aneesah’s campus closed down in the spring, the couple’s plans shifted rapidly. With remote-learning, Aneesah was able to help Jack move, and the pair drove from Chicago to Colorado together. Though she intended to stay for a short visit just to help Jack settle in, Aneesah says her plans started to change on a weekly basis and there was no point in her going back.

When her fall classes became fully remote, Aneesah decided to move to Colorado permanently. "Before all this, I was comfortable with the idea that we were going to do long distance," Aneesah says. "Now, I want to be here, and I will do anything to make that happen."

Though the pair was prepared to do long-distance, they share they're grateful they get to be together in these challenging times. “For a lot of people, the virus kept them apart, but for us, it allowed us to be together and accelerated the next stages of deepening our relationship," Jack says. “What was supposed to be a year apart turned into moving in together, and now we've been living with each other for five months."

While the couple once planned to stay in Littleton, Colorado, for a few years, quarantine has inspired them to stay for the long-haul. “I don't want to move anymore,” Aneesah says. “Even beyond the few years we've talked about spending here, I'm ready to settle down. It feels stable and manageable to build a life here."

Leah & Jaycee Postponed Their Wedding But Bought A House (& A Dog)

After dating for eight years, Leah, 27, and Jaycee, 30, planned to tie the knot on June 27. “We knew early on we had to call it off,” Leah tells Bustle. “In April, we decided to postpone the wedding for a year. Luckily all of our vendors are available, so it’s going to be a replica of the day.”

But postponing their wedding didn’t mean waiting for their future together. “Because we were in the mood to make a big life decision this summer, we started house hunting,” Leah says.

After living together in a small apartment for five years, Leah says that she and Jaycee always dreamed of buying a house. “We thought it wouldn’t be possible for a few years,” Leah says. “But interest rates were really low — a record low — and we found a real estate agent on TikTok. It all happened kind of fast. We ended up buying it and moving in a month and a half later; we've been here for two months.”

Because the couple were so upset about postponing their special day, buying a home together felt like an exciting step to take. “We felt bad about the wedding, and we were like, 'OK, if we can't get married, buying a house is a Big Life Thing we can do,'” Leah says. “Having the house-hunting project and then having the actual house to organize has been good for my mental health.”

With a home of their own in South L.A., Leah and Jaycee were also able to start their family — by adopting a rescue dog named Billy. “I’ve wanted a dog my whole life,” Leah says. "He looks like a billy goat and stands on your back. He's perfect."

Peter, 36, and Richie, 30, met in 2015 and got married in 2018. "We had an instant connection and wanted to build a relationship and life together," Peter tells Bustle.

Before the pandemic, the pair planned to finish graduate school in Philadelphia and then discuss their future steps — they were considering fostering or adopting kids and moving to a more suburban area. But COVID-19 changed everything.

"Because of the pandemic, we have both lost parents and had to wrestle with funerals that didn't leave room for closure," Peter says. "It creates a sense of loss of control in traumatic events, finding our stride after and during these events is difficult."

The uncertainty of the future and the sadness of losing parents has forced the couple to put their immediate plans on hold and re-evaluate their long-term goals — like traveling, buying a home, and starting a family. They share they've not only mourned their loved ones but also their idea of what the future would look like.

"Considering the state of the world, we feel that our hopes and timelines need to shift and maybe compromise on things that we wouldn't have before," Peter says. "It's disheartening to have such ambiguous loss for things we had hoped to do."

Though the last few months have been devastating, Peter and Richie say living through the pandemic means focusing on the present moment. "For now, the steps are to survive this," Peter says. "The beauty is that we are learning to hold space and care for each other in ways we never knew before."

Rei, 28, and Bobbi, 31, met in 2018 through the roller derby community deeming their meet-cute the "queerest way possible." "I thought it was a booty call," Rei tells Bustle. "Bobbi thought it was two queer people getting to know each other better. Two years later, we're married!"

While they planned to tie the knot in New Orleans in April, the couple both contracted COVID in mid-March. "Between our illnesses and the state of the world, we had to cancel our original plans," Rei says. "We eloped five months after our original wedding date, in the same national park where I proposed."

Though the pair was still able to tie the knot, the pandemic changed their day-to-day. "It's thrown a huge wrench in our plans," Rei says. "We hurriedly moved only with the basics — it took weeks of online shopping to turn the new place into a home."

Working from home added to the couple's moving stress, too. "Bobbi began a new sales job on March 16, just as the stay-at-home order went into effect, and recently found out that her position will be entirely remote," Rei says. "It's completely changed how she envisioned her career. It's not an unwelcome surprise, per se, but a surprise nonetheless, and one that has a huge impact on someone like my wife, who isn't really a homebody."

As if changes with work and home weren't enough, the pandemic altered the couple's religious journey. "Bobbi had started the process of converting to Judaism as our wedding approached," Rei says. "Now, most of her learning is self-led through books, with some Zoom sessions scattered in. I've been unable to bring her to the synagogue to experience the true depth of an in-person Shabbat service."

Tori, 25, and Jack, 26, say they've been inseparable since their first date in 2017. While they've always planned to get married and buy a home together, living in quarantine catalyzed their future planning.

"Our timeline to buying a house has sped up significantly," Tori tells Bustle. "We currently live in a 700-square-foot apartment, so it's been an eye-opener of what it’s like to be on top of each other constantly. We are spending more time than ever at home. We need more space."

In addition to house-hunting earlier than planned, Jack popped the question in quarantine.

"Our birthdays are within a week of each other, and I was sad we couldn’t do a whole lot," Tori says. "I planned a little birthday party for myself where we would look cute and have dinner together. My family has been 'the bubble' we'd been around."

Of course, Jack made the dinner extra special. "He proposed after I blew out the candles on the cake! It was a surprise," Tori says. "I apparently planned my own proposal party!"

While the couple were excited for their big day, wedding planning in a pandemic means all sorts of problem-solving. "I’ve had to consider things I have never even thought about!" Tori says. "I spent months trying to decide on a wedding date and considering if we would even be able to get married at all or should just not even risk it. But I am not here to complain! Love is not canceled."