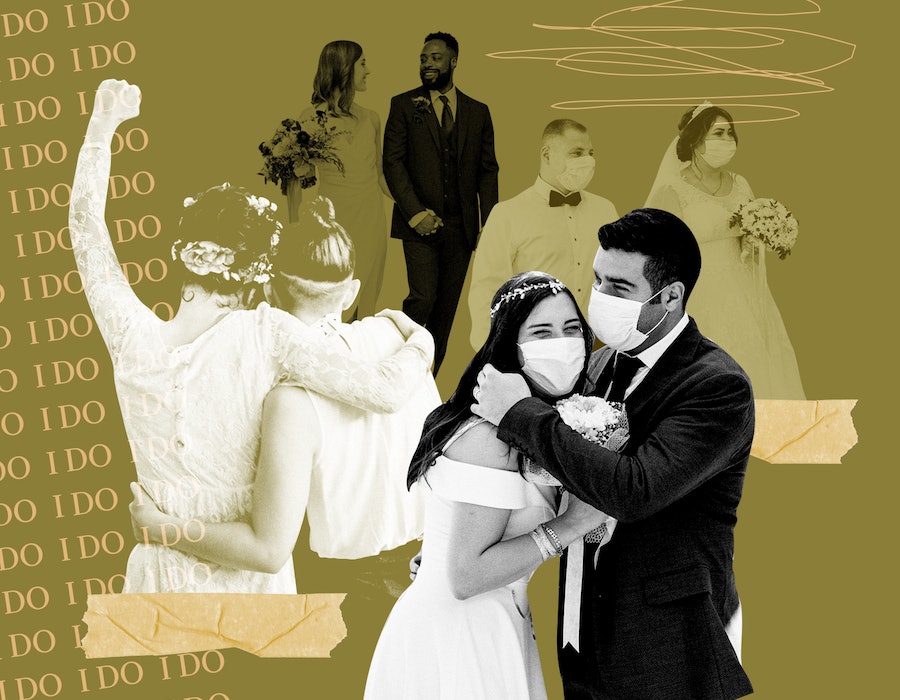 During a pandemic, the wedding vow "in sickness and in health" takes on a new meaning. Couples and their loved ones have pivoted to put together pandemic weddings — from a social distance, that is — amid restrictions on large public gatherings in some states. According to a 2020 The Knot survey of 527 American couples, 93% of engaged couples are postponing or modifying their original wedding plans during quarantine, with 71% incorporating health and safety measures into their celebration and 36% creating a virtual component for guests — like eloping in the mountains or tying the knot on Zoom.

Although all these couples had their plans abruptly changed, they managed to pull off sentimental celebrations, full of true love, serious innovation, and dogs in mini tuxedos.

Brides Michelle, 33, and Steph, 36, tied the knot on June 14, at Farm Pond Park in Framingham, Massachusetts. Though they originally planned to be joined by 120 friends and family members, in early April it was clear that having a big ceremony wasn’t a safe option. “Some of Michelle's family is in Canada, so they wouldn't have been able to cross the border,” Steph says. “The travel logistics just didn't make sense any way we sliced it.”

While the brides rescheduled their full reception for March 2021, they decided to have a reduced ceremony of 10 people, officiated by a close friend. Their guests included friends and family, a videographer and video editor, who streamed the ceremony for guests that could not attend. Steph’s sister from Nebraska FaceTime’d in wearing her bridesmaid dress, with her two children wearing their wedding attire as well. A chef friend made bento boxes for everyone to have a socially distanced picnic after the ceremony, while other loved ones decorated the bride’s home and driveway with sidewalk chalk and flower petals the night before the wedding.

"It wasn’t the wedding either of us dreamed of, but we made it special!"

Steph’s best friend made both of the brides' dresses. “The concept came to her in a dream: Sea and Sky,” Steph says. The brides got their flowers at a local farmers market and arranged their bouquets themselves. Since the parks weren’t issuing permits during the pandemic, the couple made decorative stakes with flowers and ribbons to mark a little space for their ceremony. After the wedding, they took a mini-honeymoon to Provincetown, Massachusetts. “We were able to stay socially distanced and still walk on the beaches and do a little careful amount of outdoor dining,” Steph says. “My wife is high-risk, so we were not messing around with safety.”

While changing their wedding plans was difficult, Steph says the couple’s friends and family came through to make this day meaningful. “It wasn’t the wedding either of us dreamed of,” Steph says, “but we made it special nonetheless!”

Theodra, 30, and Sidney, 32, had a Zoom wedding on June 6 in their apartment in Philadelphia, Pennsylvania, just a week after moving. Before the pandemic, the couple planned to have three wedding ceremonies in order to include friends and family from around the world. “This is diaspora life,” Theodra tells Bustle. “We were going to have a ceremony at my parents' house in Ohio on May 2, then one in Philly on June 6, and then a traditional West African marriage ceremony on our honeymoon in Benin, where Sidney is from.”

About two weeks before their scheduled Ohio ceremony, Theodra and Sidney let all their guests know that they'd canceled all of the ceremonies and trips. “For my mom in Ohio and his mom in West Africa, the most important thing was that we did get married, so we decided to do a Zoom wedding,” Theodra says. “We kept our original Philly wedding date, and it looked very different than what we were anticipating.”

Joined by two friends, the couple streamed their home Quaker wedding ceremony on Zoom. They picked up cupcakes from a local bakery, ordered flowers from a local farm, and set up their living room with garlands, confetti, and a computer station. A friend read a poem from Joy Harjo, the couple shared "promises" they each wrote, and then the bride’s sister read from belle hooks’ All About Love during the ring exchange. “Then we opened it up for everyone on Zoom to give us marriage advice,” Theodra says. “Our relationship is most important — the party is extra.”

"Seeing our family and friends unite and celebrate, that felt hopeful."

The wedding fell during one of the largest Black Lives Matter marches in Philly, and the couple felt hesitant about holding a wedding during such a serious and somber time. “I was not in a celebratory mood that whole week, but getting married made things feel a little better,” Sidney tells Bustle. “Seeing our family and friends unite and celebrate, that felt hopeful.” The day after tying the knot, the couple attended a march in Philly. “I remember having a conversation the next day saying, 'I’m angry, but keep pushing,'" Sidney says.

The couple plan to use their original venue and vendors in Philly for a first-anniversary party in June 2021. While the honeymoon to Benin and the traditional West African wedding are indefinitely postponed, Sidney says his mom still went all out in her village with a full goat roast and giant feast.

“It wasn’t what we wanted, but it was really beautiful, and I wouldn’t change anything about how it went down,” Theodra says.

On July 11, Caroline, 26, and Kevin, 26, exchanged vows in a "micro-wedding" backyard ceremony in Annapolis, Maryland. Though the couple initially planned to have a 200+ person wedding in Annapolis, on Aug. 29, they quickly adapted their plans as the pandemic grew in May. “We were bummed, but it was a relief to know that we didn’t have to worry about it all summer,” Caroline tells Bustle.

Caroline and Kevin decided to host their intimate gathering in July, inviting 22 close family members to Caroline’s parents’ backyard, officiated by the bride's grandmother. The original caterers took care of the food and drinks, while the bride’s parents gleefully set up the tent and three tables, and decorated with flowers and pink bunting. “I was incredibly thankful that my parents took charge of the planning and decorating,” Caroline says. “My husband and I had do 0.05% of the work.”

"I managed to have the best day of my life during the worst year of my life."

The ceremony was entirely outside, and guests wore their masks when interacting with the catering staff. Caroline and Kevin provided face masks and hand sanitizer.

Following their micro-wedding, Caroline and Kevin plan to have their big wedding at a later date. Though Caroline debated wearing a more casual dress for the “micro” ceremony, she decided to wear her original formal wedding dress last-minute. “I’m so happy I did,” Caroline says. “I managed to have the best day of my life during the worst year of my life.”

Javay, 26, and Anton, 32, eloped on Aug, 4., in a private mountain ceremony on Brainard Lake, outside Denver, Colorado. Before the pandemic, the couple planned to have a small ceremony and reception on the same date in California. “It was always going to be very intimate,” Javay says. “Only best friends, aka our wedding party, who were willing to take off work on a Tuesday.”

Though the couple wanted to get married at the river where they fell in love, they chose to tie the knot in Colorado, where the two could self-solemnize. “It was just Anton, me, my mom, and the photographer,” Javay says. “We wrote our vows, and they perfectly reflected how in sync we are. My mom laughed at how similar they were.” She and Anton’s two dogs, Boris and Igor, were there as well. “They’re our kids,” she says. “How could they not be there when Mom and Dad got married?”

Though eloping in Colorado wasn’t their original plan, Javay couldn't be happier with the wedding. “I honestly hope more people elope,” she says. “Save yourself some money. Have something intimate, and don’t think about anyone else with the planning — just what you and your partner want.”

Though Javay purchased her dress in February, the two didn't book any vendors or venues in California before switching their location and guest list. “I was able to just look up new vendors in Denver,” she says. The couple plans to have a big first-anniversary party with friends and family next summer. “I think anniversary parties should be a thing,” Javay says. ”We should celebrate relationships for their longevity."