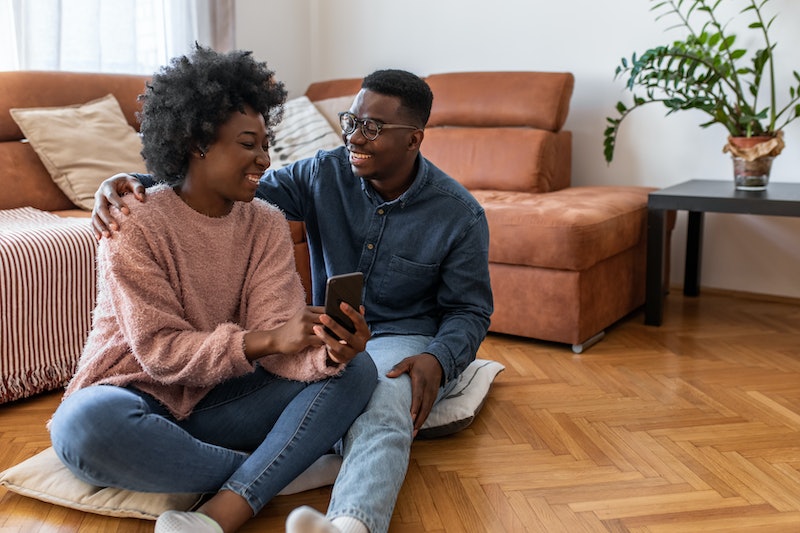 After six years of dating, my partner and I decided to move in together. When the pandemic hit, we shacked up for a few months early under his parents’ roof in Richmond, Virginia. We signed our first apartment in Brooklyn— and consequently consolidated finances — in August 2020. With a tangible mark of partnership, a home we jointly claim as our own, combined finances, and the adoption of two (yes, two) cats, we find ourselves catapulted into what feels like a more legitimate adulthood than what we had established pre-COVID.

The pandemic has advanced big moments for many couples. Sure, lockdown didn’t exclusively make any decisions for us, but it certainly catalyzed them — even when it came to financial commitments. Why pay two rents instead of one or ogle at cat memes when we could own two? My partner and I, like many couples, have spent almost every waking moment together for the past year, so reevaluating our spending habits together felt more intuitive than ever.

The backdrop of these major life moments is, of course, capitalism. The financial state of individuals, companies, and entire industries is precarious, and money conversations between couples are multiplying. According to a 2020 Personal Capital survey of 2,046 in conjunction with The Harris Poll, approximately 61% of Americans reported that COVID-19 has increased their valuing of financial stability in a partner; and 49% of respondents coined financial stress as a “deal-breaker.” Due to the uptick in monetary strife, couples are combining finances earlier than anticipated — 26% of couples from the survey reported creating a shared bank account, 26% opened a credit card together, 16% moved in together. “Macroeconomic forces push conversations to happen sooner than they would have,” Mandi Woodruff, Chief Consumer Advocate of Ally Bank, tells Bustle. During a tumultuous, unpredictable year, combining finances with a partner has become an unexpected source of stability for some.

I’ve been warned my entire life about women who can’t leave relationships due to financial codependence.

Of course, no two couples are the same. “There are different types of couples—you know the ones that say ‘hey I bought the TV, you buy the dining table’— but we’re not that couple," Navya, 25, tells Bustle. She and her partner, Austin, used to be the couple that split everything down the middle, but after moving in together, their assets multiplied. They started sharing assets following an official domestic partnership certificate— something they pursued at the onset of the pandemic. “My work allows employees to share health insurance with domestic partners, and Austin doesn’t have coverage because he is a freelancer,” she tells Bustle. The two sought out the title through a series of paperwork, but their pursuit of insurance at the height of job insecurity was ultimately their reason to combine finances.

From their pandemic-confined decision has emerged a sense of solidarity, which translates to decisions around money. “It’s made us more invested,” Navya says. After moving in together in Brooklyn, NY, she and Austin purchased a car and a dog— two integral elements to their new combined life. And as their assets have multiplied, they’ve learned more from each other. “I’m a spender; Austin is not," she says. "He shows me it’s OK to live with a little, [and] I advocate to buy things. I’m like, ‘here’s the pitch. It’s a couch. It’s this much money. This is why it’s worth it.’”

For Hannah, 25 — who navigated a move to Washington D.C. in July 2020 — combining finances with her partner was mandatory while she searched for jobs. “It was necessary to prove income to the landlord,” she tells Bustle. Even with her new job, Hannah and her partner are relieved they have combined as her paycheck was lower than she anticipated. But Hannah says she struggles with a healthy dose of imposter syndrome when it comes to sharing money. “I’ve been warned my entire life about women who can’t leave a relationship (namely a marriage) due to financial codependence,” she says. “I often have to remind myself that I work as hard as my partner because making less money in a financially integrated relationship feels akin to bringing less to the proverbial table.”

Hannah says the key to overcoming expectations surrounding gender wage gaps and the outdated notion of a masculine breadwinner within a family structure is openness. She feels their relationship “has easily withstood— even flourished under— the supposed stressors that come with sharing financial burden.” The two feel confident in their decision and empowered by how the combination makes assets more affordable.

Our finances have become one very tangled bush.

But there are legitimate fears that come with incorporating finances more intimately into one’s relationship. “Every relationship is a negotiation of autonomy and security,” couples therapist Zoe Hicks tells Bustle. “The more you combine finances, the more secure you are — but the less autonomy you feel you have.”

This has always been my concern: I make half of my partner’s earnings and witnessed financial infidelity in my parents’ marriage. That’s why my partner’s and my relationship up until last year had been financially reduced to a back-and-forth Venmo tag (me charging $6.00 for toilet paper and getting hit back with $11.00 from late-night Dominos), all in an effort to make up for lack of equality with financial equity. Following endless financial flirtation, we decided to open up our very first joint credit card.

June, 28, has had the opposite experience to a stringent Venmo regiment. “Our finances have become one very tangled bush,” she tells Bustle. June and her partner, Zander, recently relocated to Santa Barbara following her mid-pandemic breast cancer diagnosis. “I was the person who always kept things transactional. But with my diagnosis and the time together, you just don’t give a f*ck. Like, we’ll figure out how to split the paper towels later.” This new chapter in her life — a pandemic compounded by cancer— has allowed for a new financial relationship filled with flexibility. “Before, I would ask permission,” June says of her pre-COVID shopping habits. Now that they’ve merged their money, the two are less worried about the granular breakdown of purchases.

Hicks says that discussions around money and joining accounts is “complex because it’s a business relationship and a romantic relationship and [finances] can be triggering.” Per Hicks, people tend to define money as exclusively objective when, in fact, its subjectivity is what can be the most difficult. Genny Finkel, clinical social worker and therapist, tells Bustle that talking through the financial experiences of couples can help destigmatize finances and make it a more comfortable conversation. She recommends avoiding dollar specifics and focusing on the anecdotal. While the intimacy and vulnerability of money can manifest as avoidance in many couples, Hicks says that “once that’s overcome, it’s a beautiful thing to be in sync with one another’s spending.”

With our plunge into a new phase of adulthood, my partner and I are no longer “playing house”— a phrase we tossed around when we first moved in. We’re committed to growing financially together, even when that means more heated arguments about whether or not we should add pomegranate seeds to the grocery list. Ultimately, meeting each other where we are is what has alleviated my financial anxieties, whether that’s me releasing a bit of control over every financial decision or him investing more in groceries over DoorDash.

More like this
So, How Soon Is Too Soon To Move In Together?
By Jessica Estrada
8 Flirty Games To Play Over Text With Your Crush
By Lexi Inks
Passive Aggressive Examples To Look Out For In A Partner
By Jessica Estrada
35 Sexy Texts To Send Your Partner
By Griffin Wynne and Carolyn Steber
Get Even More From Bustle — Sign Up For The Newsletter