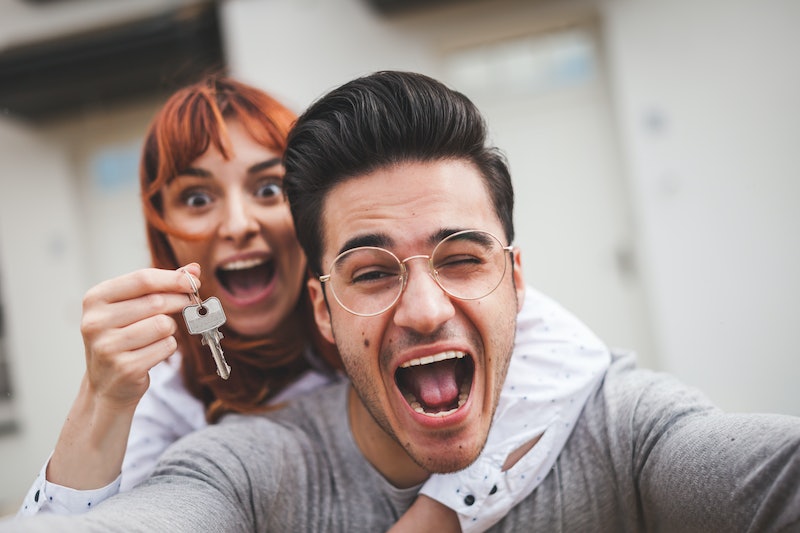 If you met your partner in March and are about to cosign a lease, congratulations — you're officially in a turbo relationship. According to Saba Harouni Lurie, LMFT, ATR-BC, a licensed marriage and family therapist, a turbo relationship is when a couple becomes very close very quickly, usually due to outside circumstances that make it easier to bond — like quarantine.

On a typical timeline, strong connections can take months, even years, to fully develop. But sheltering at home together, like many new couples have been doing throughout COVID, means having more time to lean in and be vulnerable, Lurie says. As a result, milestones occur at warp speed. And before long, it feels right to make big moves — sometimes literally.

Amy, 38, decided to stay with her boyfriend, Paul, 38, of five months during quarantine in New York City. But as restrictions began to lift, they found themselves up and moving to Amy's home city of Vancouver, Canada. Not only were they about to move to a new country, but Paul hadn't even been to Vancouver, nor did he have a visa.

Nevertheless, the two drove to Seattle, waited on paperwork, and then crossed the border — never once having second thoughts. "I think the pandemic accelerated what would have happened eventually," Amy tells Bustle. "There's never been a question about commitment or where we were heading. There's a knowing. And it feels different."

According to Lurie, that's the nature of turbo relationships — a sense that the relationship is right, despite its speed. One explanation may be that many people seek out solid connections for a sense of comfort and stability in an otherwise unpredictable world. Crises can also make you reevaluate what you're looking for in life, and step off your beaten path.

"If quarantine wasn’t happening, our relationship would be nonexistent."

Jordan, 28, didn't want anything serious when she met her boyfriend Rick, 31, while on vacation in Los Angeles back in March, just days before the country shut down. "I’m notorious for moving slowly in relationships and staying single for a long time," she tells Bustle. She was also living 3,000 miles away in NYC, so the two agreed to take things slow.

Cut to a few days later. Jordan was back in her apartment, talking to Rick on Zoom, when they begin half-joking about moving in together during quarantine. And just like that, she was driving back California, with half her worldly possessions in tow, and has since moved in officially. "If quarantine wasn’t happening, our relationship would be nonexistent," Jordan says. "Quarantine forced us both to slow down so we wouldn’t have even had the time to pursue it otherwise. If it was going to progress, it would have progressed a lot slower."

While the term "turbo relationship" was recently coined to label these speedy quarantine love stories, whirlwind relationships are nothing new. "In the past, this type of accelerated relationship might have sprung up on a backpacking trip," Lurie says, during wartime, or any other major, life-changing event. And despite how fast they seem, many have a history of working out.

Lurie says couples who are super compatible from the get-go have a good chance of creating a strong connection. "However, as with any relationship, folks with mismatched attachment styles or unaddressed relationship issues may face more hurdles in lasting long-term," she says. Another potential downside can occur once the dust settles, when couples may wonder if they were truly meant to be, Lurie says, or if they simply got caught up in the moment.

For many, though, it's clear that the timing — and the relationship — are right. "We pushed so much against this and said we weren’t looking for anything on our first date," Jordan says. "Then quarantine happened, and we realized [neither of us was] going anywhere."