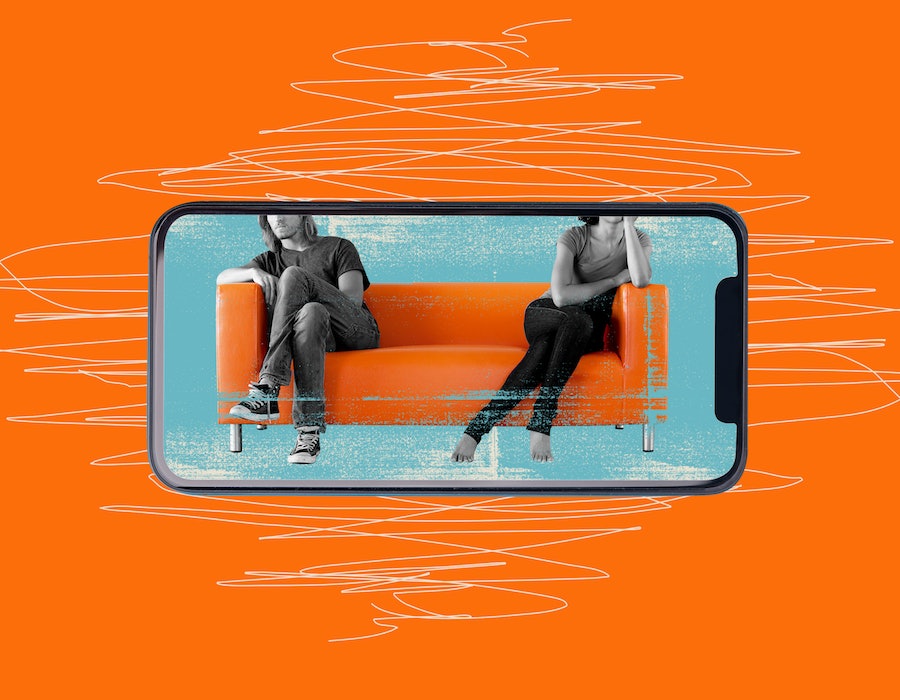 For me and my partner Bryan, 2020 was a year of massive milestones. We bought a house, moved in together, and got engaged — all in the middle of a pandemic. While he adapted to drastic changes at work, I dealt with my mom’s never-ending health battles. As quarantine dragged on, we both developed a short fuse, and the small irritants began to snowball into relationship anxiety. One afternoon, he made a popping noise with his jaw, and I had a next-level meltdown. I’m not alone: A 2020 American Family Survey of more than 3,000 respondents revealed that 37% of men and women feel that the pandemic increased stress in their marriage. Like many other couples, we realized that we could use some extra support but were hesitant to start seeing an in-person therapist due to the pandemic. Then I discovered couples counseling apps — when I spotted an Instagram ad for Lasting, which bills itself as “marriage counseling made easy,” I knew we had to give it a try.

My fiancé and I have vastly different work schedules and have been trying to quarantine as much as possible, so a couples counseling app felt like the perfect solution — we could participate in our own time, from the safety of our own home. And at $11.99 a month, it’s a lot more affordable than traditional couples counseling, too, which can cost up to $300 per session.

Here’s how it works: After you “pair” your phones within the app, you each take an initial assessment that requires you to rate (on a scale) your satisfaction in a variety of areas, including sex, conflict, communication, family culture, finances, and emotional connection. Fair warning: you and your significant other will get to see all of each others’ ratings afterward. But as we find out, honesty is the only way to expose those issues you may have been ignoring or blissfully unaware of (more on those later).

Once you complete and compare your assessments, the app recommends programs that are specific to your problem areas, or you can pick them based on your priorities. Courses are made up of five to 12 sessions, each of which only takes about five minutes to complete. You can totally do these sessions separately if that’s easier, but Bryan and I designated 10 to 20 minutes per day to work on our selected programs side by side. Other features that we opted not to take advantage of include daily conversation starters, single-session guides for mindfulness, and weekly expert-guided workshops on everything from setting boundaries to managing anxiety as a couple.

I’ll admit it: Even though I was curious about the app, I was a little skeptical that counseling could really work without an actual counselor. Without a human being to observe our behavior and guide the conversation in real-time, wouldn’t something be lost? But Lasting, founded by The Knot alum Steven Dziedzic, is backed by decades of research about relationships and claims that 94% of the couples who use it report new strengths, so we decided to try it out. Here’s what we noticed after using the app for just one week.

Per Lasting’s recommendation, we kicked things off with the Foundations course, which began with an extensive questionnaire about different areas of our relationship health so we could identify our “growth areas.”

Once it came time to share our answers, I was relieved to find that we were on the same page about a lot of strengths — like the fact that we support each other’s goals and dreams and are satisfied with how much quality time we have together. But, there were also several areas we disagreed about — for example, I rated us as doing somewhat poorly on the conflict resolution front and well on the money front, whereas he rated us the complete opposite. I was floored, and TBH, a little hurt that he felt we couldn’t talk about finances maturely. How could we view things so differently? Were we even in the same relationship?

“This was a terrible idea,” I said, mascara streaming down my face. The fact that each of us was so dissatisfied with an area of our relationship that the other felt good about definitely threw us. Once we took a deep breath and took the time to listen to each other, though, we realized what a gift it was.

“This is good,” Bryan reassured me. “We’re airing stuff out.” I’m typically more of a sweep-those-issues-under-the-rug-where-they-belong kind of gal, so maybe he had a point.

Now that we knew about these growth areas, we had an opportunity to find concrete ways to address them. Bryan gently pointed out that the minute money comes up, I either roll my eyes or change the subject. So, I vowed to at least try to hear him out next time he expressed concerns about my reckless spending on loungewear. I noted that disagreements still occasionally get out of hand — like, a couple of months ago, when a shouting match in the car prompted me to get out in the middle of the street and walk home. We agreed that’s not the way we ever want to handle things, even if it’s a rare occurrence. The solution? To hopefully find a strategy for de-escalating the situation before it gets to that point.

I walked away from the session wondering: without Lasting, how long would we have gone without knowing these gaps existed?

Based on what we learned on our first day, we decided to take both the Conflict and Money courses next.

Every program starts with an assessment, so you can do a temperature check to figure out what you’re doing well and what you could improve on. During the Conflict assessment, we learned that we both have some work to do in understanding each other’s perspectives and validating each other’s emotions when we disagree. And the Money assessment showed that while we are satisfied with our savings plan and how we prioritize money, we’re not really clear on our expectations around our budget, nor do we know how to talk about finances in a way that isn’t emotionally charged from the get-go — like how I become indignant any time he calls my Amazon Prime shopping habits into question.

Throughout the Money program, question-and-answer prompts dug into how we view money and the experiences that shaped our perspectives. Meanwhile, the Conflict program forced us to get vulnerable in sharing our “triggers” — not only the emotional reactions they cause but also the childhood experiences behind them. I realized that while Bryan and I are well aware of our differences, we didn’t know the why behind those differences — which is crucial to developing understanding and empathy toward each other. Bryan was able to share that he’s hyper-sensitive to changes in volume or tone of voice because he grew up in a household with a lot of yelling and learned to be on high alert. I got to share that I was frequently dismissed by my mom and others as “too sensitive,” so I feel triggered any time my emotions or reactions are invalidated.

The Conflict course was ripe with handy little relationship hacks. My favorite, hands down, was that we got to choose a signal phrase to use when we feel emotionally flooded and need to take a break. There have been countless times when we easily could have de-escalated a conflict by simply stepping away, but we never had any simple language to use for calling a timeout.

On our sixth day of using Lasting, we started arguing about a common source of discord in our house — the fact that I need way more sleep than he does — and I could feel my heart rate surging. Instead of continuing the conversation when I was clearly too emotionally activated to hear his side, I busted out our chosen phrase: “Let’s take an intermission” and left the room. Minutes later, when we reconvened, we’d had enough time to calm down and could finish the conversation rationally. We’ve genuinely never ended an argument so smugly. After literally kissing and making up, I asked, “Are we, like, pros at fighting now?”

It’s hard to say how Lasting will impact my relationship long-term. Still, the app has taught me that even when it feels like your relationship is “good enough,” there are always things you could be working on — and by putting in that time and effort now, you could be warding off more serious issues down the line. And even if we don’t continue using Lasting every day, I can definitely foresee picking it up now and then for a quick pulse check. Knowing that Bryan and I aren’t totally on our own in reconciling our differences relieves some of my anxiety. I’ve never been to in-person couples counseling, but I’d imagine that a good therapist can pick up on the subtleties in a couple’s behavior and then zero on in trouble areas that might not otherwise be obvious — for instance, resentment in one partner’s tone of voice, or another partner’s habit of shutting down around a particular topic.

Still, no matter how uncertain the future may feel in many regards, it’s nice knowing that we now have the tools to take control of our relationship's health.

More like this
30 Clever Ways To Slide Into Your Crush's DMs
By Griffin Wynne, Carolyn Steber and Lexi Inks
Breeding Kinks Have Been On The Rise Since Roe V. Wade Got Overturned
By Lexi Inks
Hinge Added A Video Prompt Feature, So Get Your Camera Rolling
By Hannah Orenstein
Are Quality Time & Gift-Receiving Love Languages Compatible?
By Lexi Inks
Get Even More From Bustle — Sign Up For The Newsletter