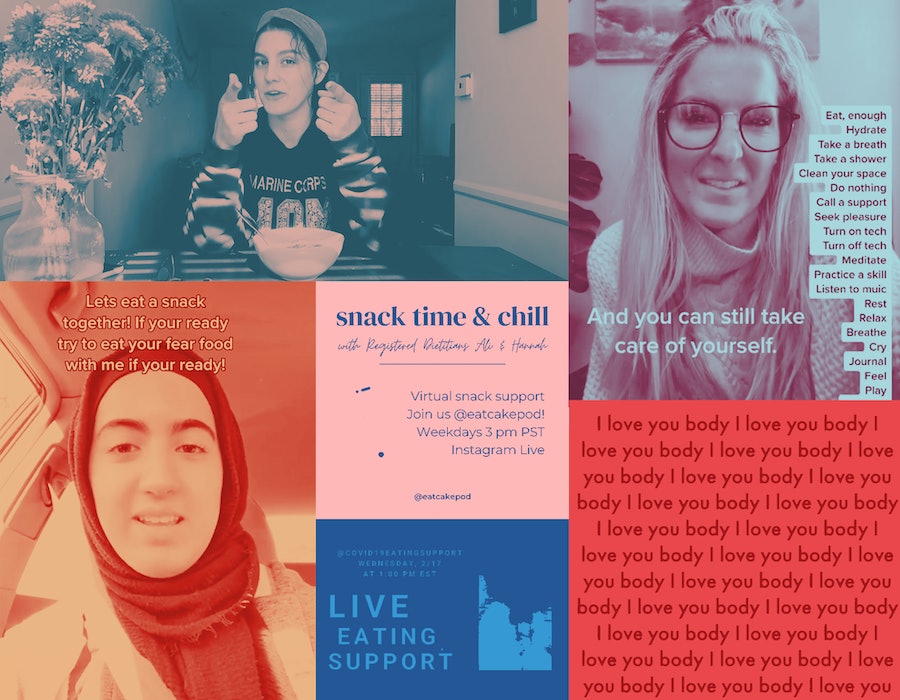 When food became a problem for me in college — a problem in that I would frequently skip meals — my nutritionist offered to sit with me while I ate my daily turkey and cheese sandwich. At first, it felt weird. There was chewing and awkward silences, food sounds, and the occasional choking after trying to talk too fast. But then, once I realized it wasn’t about having someone to monitor what I was eating or encouraging me to have that extra cookie, it became helpful, and even enjoyable. I didn’t have to be alone during a part of my day that I dreaded.

Fast-forward seven years later. The COVID-19 pandemic has changed almost everything about daily life, but none so drastically as eating. Going to a restaurant means taking a significant risk of getting or transmitting the virus. Forget going over to a friend’s for dinner; many people have spent the last year eating mostly in isolation, a phenomenon that’s led to many eating disorder patients having a difficult time in recovery. In a 2020 study published in the International Journal of Eating Disorders, more than 60% of anorexia patients and 30% of bulimia patients said their eating disorder behaviors got worse in quarantine, citing increased anxiety, lack of structure, and food availability as triggers.

Because of the pandemic, I was furloughed from my job and didn’t have the daily routine that kept making meals from feeling like a challenge. After realizing isolation had made my eating habits much worse, I began to (virtually) see a nutritionist over the summer. She helped me plan my meals so I could stick to a schedule and hold myself accountable. The more eating became a regular thing, she said, the easier it would become. One thing she thought might help, she added, were meal support accounts on Instagram, TikTok, and YouTube: places where people got together, virtually, to share a meal, like my college nutritionist had done for me.

Since the pandemic started, popular intuitive eating Instagram accounts like Anna Sweeney's, Covid-19 Eating Support, and Let Us Eat Cake have scheduled weekly, or sometimes daily, talks and check-ins, with a new user going live while eating whatever was on their individual menu for their day. Whoever goes live — dietitians, people in recovery, nutritionists, or others — simply sits and eats. Sometimes they show off their cat or a fancy new plant or even bring in their family members to taste-test different mac and cheese brands. They might touch on topics like the COVID-19 vaccine or rank their favorite ice cream flavors. Of Covid-19 Eating Support’s nearly 9,000 followers, a few dozen regulars tuned into their live streams every night.

Regan, 31, frequently goes live on the Covid-19 Eating Support Instagram, which launched in March 2020. From her home in New Zealand, she chats with people around the world while eating things like popcorn, seaweed crisps, or fruit. Regan is also a founder and peer support worker at Body Recovery Group, a virtual intuitive eating community. As someone in recovery herself, she especially loves answering questions — about things like how to cope with triggers — as they come up on these chats.

Though she stresses that because New Zealand has managed the pandemic, she hasn’t experienced the same level of isolation as people in different regions of the world, she still wanted to help others. “I wanted to be of service during this pandemic. ... This was a way I, and many others, could do a small yet powerful thing to help during a crisis that simply makes everything harder,” she says.

Jenny*, 19, tunes into videos of people eating fast food, from YouTubers like Stephanie Soo and Lucas Cruikshank, every so often to have stuff going on in the background. “When I eat, I like to have something to watch or read too, so it kind of fills my social needs in a way even though I don't know these people.”

People streaming themselves eating isn’t new: Mukbang videos — which loosely translates to “eating broadcast” — have been popular for nearly a decade, specifically in Korea. Other kinds of eat-with-me videos have provided support to people in recovery, like fear food TikTok duets, where one person encourages the other to eat foods they're afraid to eat. But pandemic-specific meal support social media brings free resources and support to those who might not have access to it, in a way that’s specific to our current circumstances.

“Anything difficult can be easier when someone is there to help carry the load,” Amy Esatto, a dietitian and movement coach from Oregon, tells Bustle. Esatto sometimes appears on livestreams on both Covid-19 Eating Support and her own account, telling stories of her day while snacking on pizza. “I would always have everyone share what they were grateful for,” she says. “Sometimes it's just helpful to have someone there to talk about light things and get you out of your head; other times there is more coaching from me to help with the fears and thoughts coming up.”

Covid-19 Eating Support had only planned to post daily videos for three or four months; they’re suspending the account in March in order to take a break after a full year of nearly round-the-clock videos. But there are plenty of other resources online for people who want to eat with others virtually. One TikTok audio, which has been used in more than 6,500 videos of people eating since September, encourages viewers to save the clips, in case they’re ever having a hard time eating: “You can come back to this video, sit there with me and enjoy your meal with me.” An “Eat Lunch With Me” trend has similarly exploded on YouTube, where users prep meals and chat while eating about anything from how to go grocery shopping to recapping Sex and the City episodes.

Lately, cooking for myself has been hard, so I have been ordering a lot of takeout (supporting small businesses is good, right?) and tuning into nightly meal support videos. Instead of feeling ashamed that I haven’t been able to cook for myself, I watch videos of other people eating takeout, almost as if they were giving me permission to order that pizza or try the new sandwich from the corner store. Eating takeout with people on the internet isn't the same as going to a restaurant with IRL friends, but gathering with others going through the same thing online has helped the last 11 months feel a little less like the end of the world.