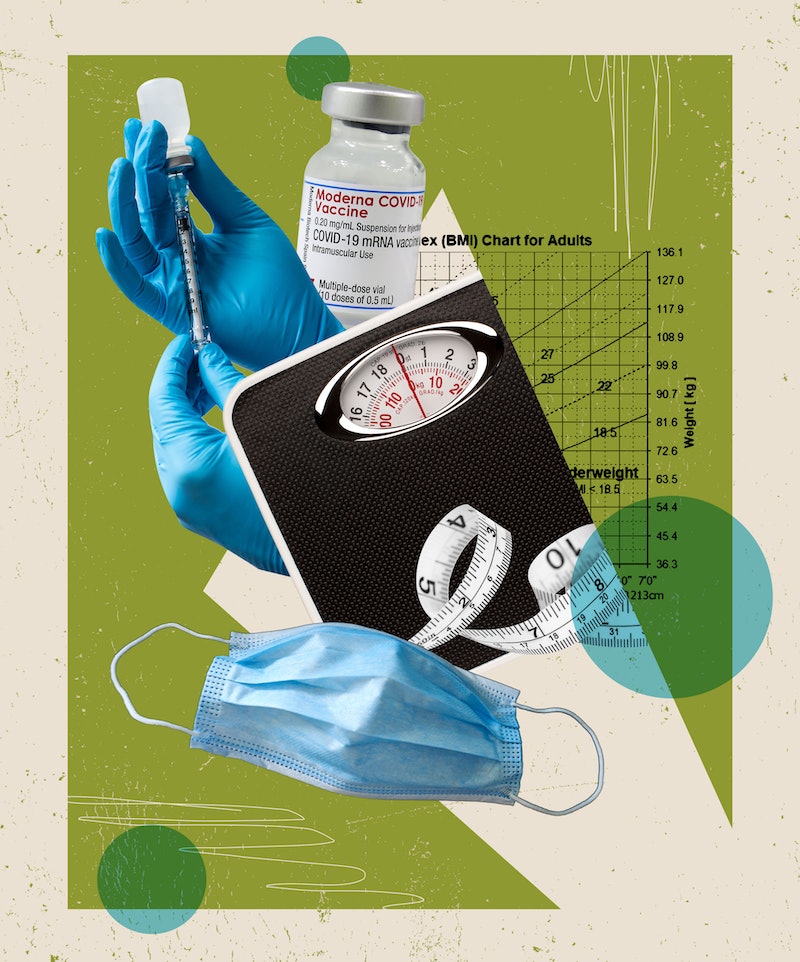 “You can get the vaccine because of obesity.” This is what my mother texted me moments after New York Governor Andrew Cuomo announced on Feb. 5 that anyone with a number of comorbidities was eligible for a COVID-19 vaccine, including having a body mass index (BMI) of 30 kg/m2 or higher.

Of course it would be my mom to tell me. She doesn’t live in New York state, but she has been a close observer of my body size since I was born premature and placed in an incubator. That was probably the last time in my life I was small; she put me on my first diet when I was about 4 years old. Needless to say, that toddler diet didn’t exactly work — here I am, four decades later, obese in the eyes of the medical establishment.

The health care system is not easy on fat people. Anyone who is even a little bit overweight has surely had the experience of seeing a doctor for something completely unrelated — such as a pap smear or, in my experience, a broken ankle — and gotten a lecture about how they should really lose 20 or 50 or 100 pounds, as if dieting were a suggestion no fat person had ever before considered. It came as a complete surprise that the medical system that had shamed me for so many years was allowing me to get an early vaccine, in effect jumping the line. I flashed back to a day in middle school where a popular girl whose locker was next to mine was suspiciously nice to me. I basked in the attention until I realized she just wanted me to do her math homework.

I texted my mom back that I’d look into the vaccines and took the conversation to a more friendly venue: a Zoom coffee date with two plus-size friends. “Are you going to get the fatccine?” I asked. They were, at least as soon as they could find an available opening. If I got an early vaccine appointment, I thought, excited but cautious, maybe this would be the first time that being obese would actually work in my favor.

A few days later, the clinic where my primary care doctor practices emailed that they were offering the Moderna vaccine to current patients. I lucked out with an appointment for the following week. When I came for my shot, I was prepared to step on a scale and prove my weight, or show the history of asthma that would also qualify me. I didn’t have to do any of that. Maybe it’s because my chart was on file, maybe because I had signed vaccine paperwork attesting my eligibility, or maybe it’s just that obvious I’m obese.

I got my first dose and waited the requisite 15 minutes to make sure I didn’t have any immediate reactions. There were about half a dozen people in the room with me. Some were seniors. Others could have been health care workers, or maybe they were immunocompromised, I thought. I wondered if they didn’t have to ask themselves how I qualified for the vaccine.

“It’s worth checking out to see if you’re eligible,” I say, and leave it at that.

Obesity has always felt like my body betraying me. It got in the way of my desire to be a normal size, and of my parents’ expectations for what a healthy daughter should look like. But even when I tried to dabble in a more self-accepting and positive outlook — telling myself I had a sexy, womanly body, or venting about the stringent standards of beauty — I blamed my failure to love how I looked on my obesity, too. The tragic part of this struggle is that it’s all out in the open. I can’t hide it even if I wanted it to. For me to be at the highest possible “normal” weight — BMI 25 or below — I would have to weigh 158 pounds at 5-foot-7. I’ve weighed that before, when I had an eating disorder through high school and college. I wore a size 6.

Getting that first shot of the vaccine didn’t radically alter how I felt about myself — how could it? — but it was a moment of joy and relief. For the first time in a year, I didn’t worry about the possibility of contracting the virus and dying from it. This time, my size worked in my favor. Still, when I told a couple friends I got the vaccine, I downplayed the weight part and mentioned my asthma. I didn’t post it on social media because I didn’t want to highlight my weight. Nor did I want to deal with people thinking I had gotten to jump the line because of it. Either way, I felt sheepish.

But I also want everyone I care about to get the vaccine as soon as they can. So I’ve been attempting to gently tell friends who I think might qualify without telling them they’re obese, taking a different tack than my mother’s. Usually I start by saying that I got the vaccine because I have a BMI of over 30, and that while BMI is a poor measure of health, that a lot of people might be surprised to find out they qualify. “It’s worth checking out to see if you’re eligible,” I say, and leave it at that.

Instead of talking a lot about weight, I tell people about the overwhelming relief I finally felt when I had gotten my shot. Getting vaccinated has made me feel like a real sense of normalcy is imminent. Indoor dining. Movie theaters. Maybe even a trip somewhere warm? I am spending the next three weeks until my second shot dreaming about palm trees, gulping glasses of white wine by a pool, art deco hotels, swimsuit shopping, and ordering at least one Cuban sandwich every day. It’s a fantasy that felt completely off-limits for the last year. Now, it feels so very nearly within reach.