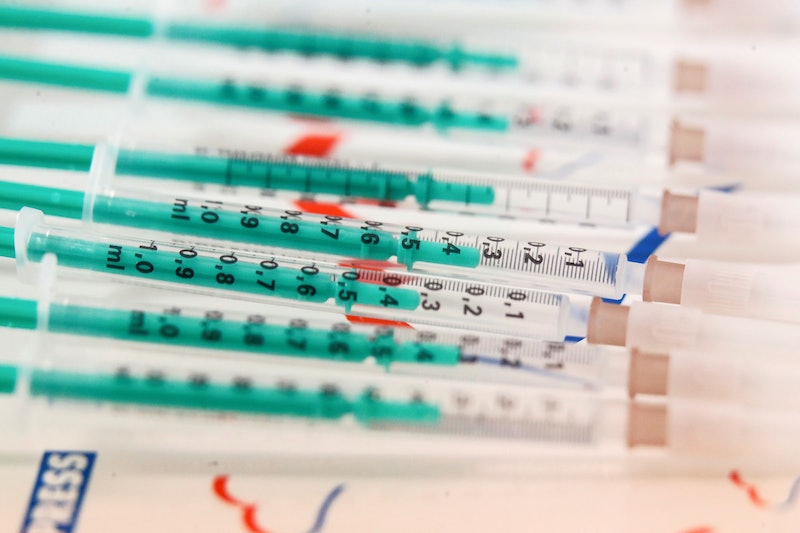 Olivia Zayas Ryan thinks of herself as a “relatively healthy person.” The 24-year old wasn’t expecting to get the COVID-19 vaccine until whenever vaccine appointments opened for the general population in New York City, where she lives. That changed, though, once she saw a friend post on Instagram about how she's eligible for the vaccine because her body-mass index (BMI) qualifies her as obese.

Zayas Ryan struggled with body dysmorphic disorder and disordered eating as a teen, and seeing that post triggered feelings that she thought were no longer a part of her day-to-day life. When she was active in her eating disorder, she would check her BMI “constantly” to create new weight goals for herself. After seeing the Instagram, she then had to decide if it was worth it to weigh herself. On one hand, her BMI could qualify her for the vaccine — but seeing that number could also put her into an unsafe headspace.

“I’m a healthy person, I have a steady job where I can work from home, I am fortunate enough to be able to order groceries if I need to,” Zayas Ryan tells Bustle. “I am eligible, but do I need the vaccine?” She ultimately decided that it’d be worth it to make her community a little safer, and got her first Moderna dose in February.

Having obesity, or a BMI over 30, makes a person three times more likely to be hospitalized for complications related to COVID, per the Centers for Disease Control & Prevention (CDC) and there is a correlation between risk of death from COVID that tracks alongside rising BMI. As a result, nine states in the U.S. use BMI as a qualifier for vaccine eligibility, per Business Insider; an additional two do so for people with severe obesity, or a BMI over 40, and another four allow vaccination for people who qualify as obese and have another underlying health condition.

But there’s been growing sentiment over the last few years among medical professionals that BMI isn’t a useful measure of health, and creates additional stigma for fat people. The index was created by a statistician in the early 1800s as a formula for determining the average height and weight of white men, and started being used in medical settings as a means of predicting disease. Shifts to the formula in the late 1990s rendered a lot of people with “normal” weight “overweight” or “obsese” overnight, says Amy Severson, RD, a fat-positive dietitian in Bellingham, Washington. “Obesity then became a disease with no other qualifications for it other than weight, as determined by BMI,” Severson tells Bustle.

"It’s really exhausting to be fat in the world and if there’s a chance for some fairness or equity, we can’t afford to turn it down."

Even outside of a pandemic, people with high BMIs often report poor treatment from medical practitioners, who assume that their weight is the sole source of their illness. A 2015 study published in Obesity Reviews cited doctors wishing that they didn’t have to care for fat people at all. A 2016 study published in Frontiers in Psychology shows that fat people, and women especially, routinely avoid seeking medical care because of the way that doctors treat them.

This is the case for Cara Levine-Brenner, 38. “I hate to go to the doctor. I know I am less likely to get the care I need,” she tells Bustle. Though she and her wife have been self-quarantining intensely for the past year, she worries about what it would mean if they were to get COVID. “Our symptoms don’t get taken as seriously,” she says. “Doctors are always assuming that all fat people have breathing issues. The thought of trying to explain that I can’t breathe because of COVID and not because I’m fat and someone who is active and moves around a lot — I could see that being me.” Levine-Brenner says that’s why she thinks it’s justified that people with high BMIs can get the COVID vaccine earlier, even though she admits to feeling “very mixed about it” because she’s otherwise healthy. She’s scheduled to receive her first vaccine shot in March.

Kimmie Singh, RD, a body-positive dietitian based in New York City, says she isn’t surprised that the one time doctors prioritize fat people, it’s serving the general population. “The benefit of fat people being vaccinated is, people say, that we don’t want to put any further strain on our healthcare system. But I feel like if it weren’t like, ‘This helps us all,’ fat people would be left out because we are so often left out of healthcare.”

Says Severson, “I don’t think obesity is a medical condition ... but we should also give [people] medical care if the size of their body will prevent them from getting medical care. You’re putting yourself at less risk by getting care when you can.”

On the day of her vaccine, Zayas Ryan felt her body dysmorphic disorder flaring, so she got dressed up and did her makeup (and made a TikTok) to feel more at ease before her appointment. “I wasn’t sure if they were going to ask why I qualified or worse, if they were going to weigh me and calculate my BMI right there.” None of that happened; the site administrators just took her registration number and brought her through the Brooklyn “supersite” where she got the shot.

After all of it, however, she felt pretty much the same as before: grateful to get the vaccine, but frustrated that an “arbitrary metric” — one that tormented her during her eating disorder — allowed her to get vaccinated when “populations that should be prioritized are still being under-vaccinated.”

“It’s really exhausting to be fat in the world and if there’s a chance for some fairness or equity, we can’t afford to turn it down,” Levine-Brenner adds. “Sometimes we have to take what we can get.”