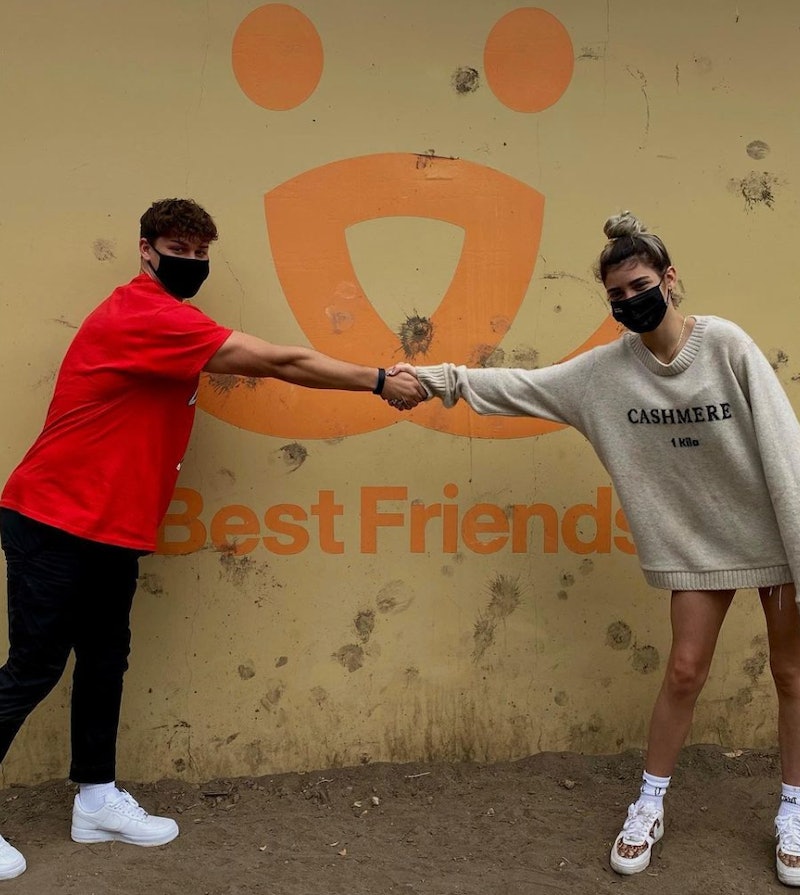 Forget the Oscars, Golden Globes, or Grammys — the only accolades that mean anything anymore are the ones given out at the Tiktokroom Awards. Once a year, the shaderoom page, which has nearly two million followers, announces who's taking over on TikTok with categories like "Best Dance Creator" and "Most Achieved." And to say it's a big deal is an understatement.

While it only happens on Instagram — and not in a grand theater somewhere near Hollywood — Vox reported that nearly 500,000 votes were cast via Google Form for the Tiktokroom Awards, which just goes to show how, well, influential the newest crop of influencers really are.

Many fans weren't sure, however, about the difference between a TikTok couple and a ship. These two categories — "Best Couple" and "Best Ship" — were won by TikTokers Dixie D'Amelio and Noah Beck, and Sienna Gomez and Jack Wright, respectively.

Of course, as far as internet jargon goes, we all know that "ship" is short for a relationship, and it's used when fans are rooting for two people to start dating, usually because they seem really cute and happy together. And, if you watch one or two of their videos, it's easy to see why everyone feels that way.

According to the magazine Girls' Life, Gomez and Wright first became associated with each other back in early September and soon began making videos together. Since then, they've participated in couples dance trends on TikTok and have even been spotted wearing matching Christmas pajamas, further fueling the belief that they're together.

Their award on TikTok Room has already amassed over 180,000 likes. And yet, while their fans are clearly full of starry-eyed hope that the two will make some sort of announcement, all they've done is double down on their friendship — and poke fun at the rumors.

According to Seventeen, she discussed how a public relationship invites fans to share their opinions and how they can quickly turn toxic. "That can actually mess up the relationship, and I just didn't want that because I've been in an internet relationship, and having everything public and everyone's eyes on you just make things so much harder," she said.

D'Amelio went on to add that she was upset that Beck outed them when he did, but that she also thought it was "kind of cute" because it showed how much he cares. And therein lies another difference between a ship and a couple — when two people truly are dating, they'll often eventually admit it.

More like this
30 Clever Ways To Slide Into Your Crush's DMs
By Griffin Wynne, Carolyn Steber and Lexi Inks
Behind The Hilarity Of The "POV: You Walk Into My Room" TikTok Trend
By Lexi Inks
8 Completely Unserious Tips To Make Your Cuffing Season A Success
By Ginny Hogan
Breeding Kinks Have Been On The Rise Since Roe V. Wade Got Overturned
By Lexi Inks
Get Even More From Bustle — Sign Up For The Newsletter