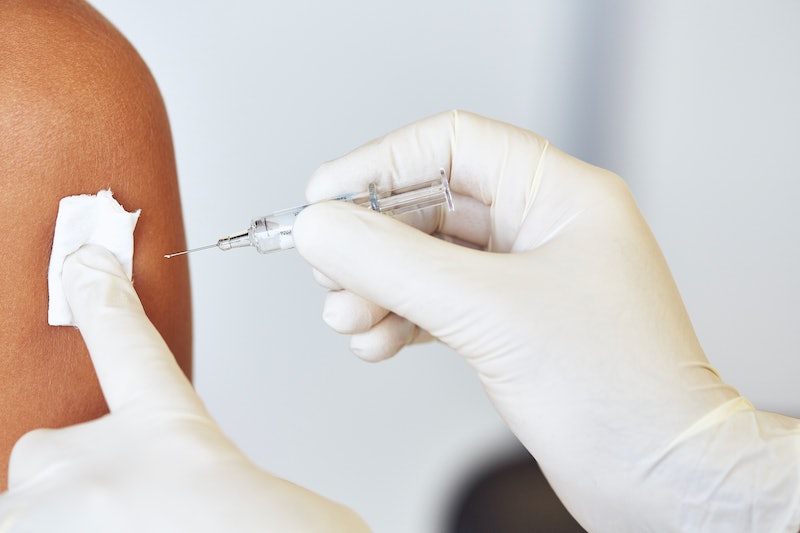 You’ve received your precious COVID vaccine, got the sore arm to prove it, and now all you want to do is sit down with a beer and watch reruns of Real Housewives while waiting for your immune system to do its thing. While your city’s hottest club may be wherever they’re giving out the shots, you might want to wait to drink alcohol after your COVID vaccine.

“There is no data that proves drinking alcohol before or after receiving any of the FDA-authorized COVID vaccines can impact its efficacy or create additional side effects,” Dr. Robert Quigley, M.D., global medical director of medical and security risk mitigation company International SOS, tells Bustle. Even without that data, though, he says it’s highly recommended to avoid alcohol leading up to and immediately after receiving your shots, whether you’re receiving two-jab vaccines like Pfizer and Moderna or the one-shot regime from Johnson & Johnson.

Typical side effects of all three COVID vaccines include fatigue, muscle aches, and headaches and it’s possible that having a glass of wine after your vaccine appointment will make those a bit worse. “Nothing in the literature says you’re going to have a fatal reaction by drinking alcohol after having the vaccine, but it may aggravate post-vaccine symptoms, worse than a hangover,” Dr. William Greenough III, M.D., professor emeritus of medicine at Johns Hopkins University, tells Bustle.

Data show that some people are more likely to experience side effects from COVID vaccines than others; if you had a reaction to the first dose of two-shot regimes, for instance, you’re likely to get symptoms from the second one as well. Even if you sailed through the first shot and want to celebrate getting your second, though, cocktails shouldn’t be on the menu for at least a few days. “It’s probably best to not imbibe at least for 48 or 72 hours after the appointment, particularly after the second shot,” Greenough says.

When it comes to drinking in the period between vaccinations for two-stage vaccines, the science is less firm. New Scientist reports that while some scientists have recommended abstaining from alcohol entirely in between the two shots of COVID vaccines, others disagree and think mild consumption after the first jab, after three or so alcohol-free days, is perfectly fine. The participants in the clinical trials for the Pfizer, Moderna, and Johnson & Johnson vaccines weren’t told to avoid alcohol, likely because it would have been very hard to control. You might want to consult with your doctor about whether easing off alcohol between your first and second Pfizer or Moderna vaccine is a good idea for you. That champagne cocktail will be there for you soon enough.