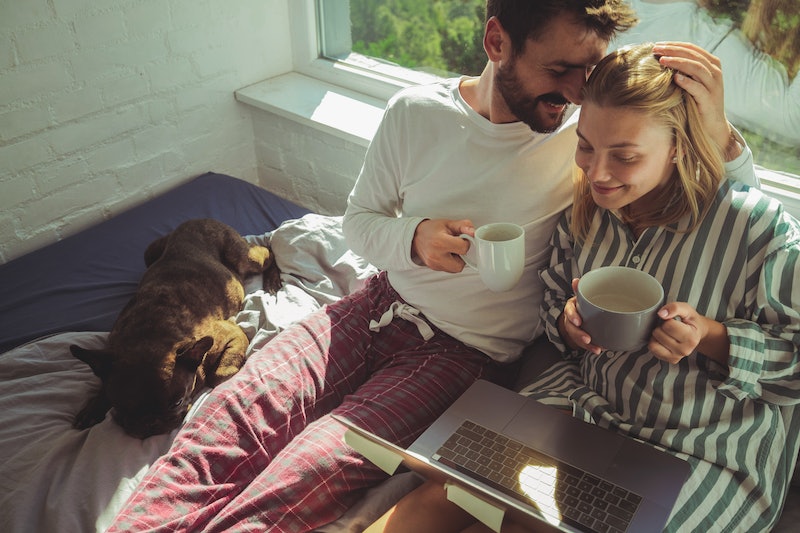 What makes someone good in bed varies wildly depending on who you ask. A lover who is patient and gentle might be amazing for one person and boring for the next — it’s all about perspective. Great sex is a learned skill that takes communication and practice. It also takes some degree of energy and endurance. For those looking for an extra, aphrodisiac-induced edge, mixing coffee and sex might mean the difference between good and amazing sex.

Coffee isn’t a cure-all for a low sex drive, says certified sexologist and certified intuitive eating counselor Satori Madrone. “[Sex drive] is complex, and includes desire and the subjective experience as well,” not just physical arousal or stamina. But caffeine can play a role in those latter two. For instance, while 62% of the U.S. population drinks coffee daily, timing your cuppa might be key to unlocking its sexual enhancement properties. “It takes anywhere from 15 minutes to two hours to feel coffee’s peak results,” says Madrone, “so drinking coffee before sex might yield the most beneficial results.”

There’s a million ways to incorporate your morning brew into your sexual wellness routine. Here are six reasons why coffee can help you become a better lover — at least, according to science:

While caffeine may aid in genital arousal, Madrone notes that sex drive is a little more complicated than just increasing blood flow to the genitals. “What makes people a good lover is different for everyone — and not necessarily dependent on sex drive or physical arousal,” says Madrone. “Our unique experiences, hormones, and other factors all contribute to sexual arousal, desire, and drive, and no aspect of sexuality is the same forever.”

Around 30 million men experience erectile dysfunction (ED) in the United States alone. According to research from the University of Texas Health Science Center at Houston, caffeine reduced the prevalence of ED, especially when men drank two to three daily cups of coffee. Aside from the possibilities of enhanced blood flow and reduced ED, a cup of joe may also increase levels of testosterone, a key sex hormone that is thought to regulate libido.

In one 2017 study conducted by the University of São Paulo, researchers found that caffeine boosted the athletic performance of cyclists across the board, but especially against the group that drank only water. The substance’s stimulatory effect on the central nervous system can reduce feelings of fatigue, while also improving mental sharpness and focus — meaning, coffee drinkers can stay up later and go a little longer. Sex, after all, is a type of endurance sport.

“Since stress doesn’t feel good, it’s hard to show up and fully enjoy sex,” says Madrone. “Stress has an enormous capacity to affect sex drive and sexual health as a whole. But dealing with stress levels can yield positive changes for those seeking more satisfying sex.”

Coffee may be one option for reducing stress levels. There is strong evidence that caffeine intake can alleviate the negative effects of chronic stress, at least when consumed in moderation. One 2015 study found there may even be a link between caffeine consumption and resistance to depression and memory loss.

People with depression may struggle with sex drive and satisfaction. One 2018 study found a significant link between depression, sexual dysfunction, and misconceptions about sex. But the good news is that studies have suggested that those who drink coffee are more happy than those who don’t. While other sources of caffeine, like sodas or overly sweetened coffee, are associated with a higher risk of depression, a strong cup of coffee has a lower risk.

Nothing feels better than an attentive, proactive lover — and coffee could be just the trick for staying sharp after a long make out session. One 2014 study published in the Journal of Nutrition found that caffeine improved the mind’s cognition, verbal memory, and attention span. Java can give the brain a wake-up jolt, and help with alertness, reaction time, and mental endurance.

Of course, what makes a great lover great doesn’t always depend on endurance or a cup of morning-after coffee. “Sex is an individual experience,”says Madrone, “What makes us good in bed at 28 is different from what makes us good at 68.” The key is being adaptable, communicative, and always willing to try something new. Like that new cold brew drink at Starbucks.

Thakurdesai, Abha, and Neena Sawant. “A prospective study on sexual dysfunctions in depressed males and the response to treatment.” Indian journal of psychiatry vol. 60,4 (2018): 472-477. doi:10.4103/psychiatry.IndianJPsychiatry_386_17

This article was originally published on July 20, 2015