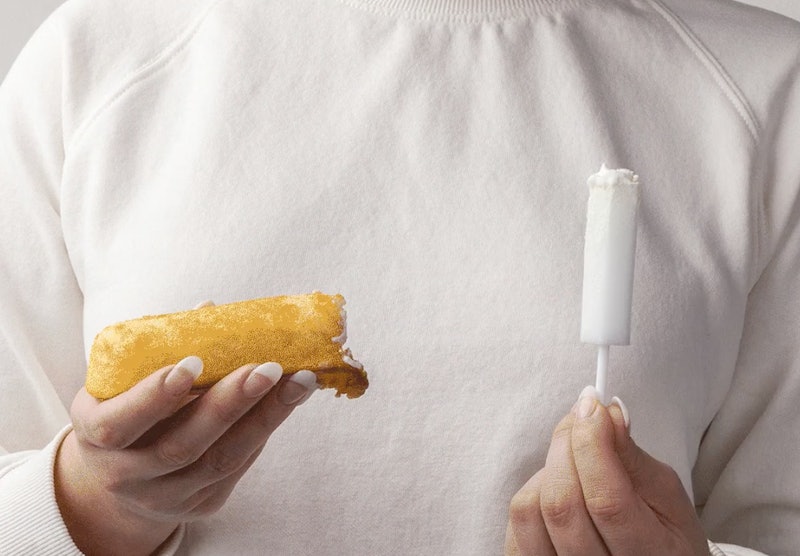 You may have seen a recent viral TikTok from a company called Awkward Essentials, describing their primary product: the Dripstick, a tool you insert into your vagina after sex to absorb the extra semen. “You put it in and give it a little spin, or don’t,” the video explains. The medical-grade sponge looks like a cross between a tampon and a Push Pop. It’s meant to simplify after-sex clean-up and eliminate the risk of dripping during your post-coital waddle to the bathroom.

The Dripstick video inspired 2 million likes and a lot of emotions, per the account’s bio (“just a sponge but ppl [sic] feel very strongly about me”). It purports to solve a very tangible problem: sex is a messy endeavor, and not just emotionally. Though I’m pretty terrified of anything that goes up my vagina — I grew up on teen magazines in the aughts, which meant I truly thought I would lose friends to toxic shock syndrome like it was Game of Thrones — I was curious to see how it works, if only to have a story for the group chat. My friends needed to know. People with vaginas everywhere needed to know!

I’m recently single, and just started sleeping with someone new. He was game for the Dripstick the third time we had sex, post-STI testing, which I thought was pretty chill of him. After successfully completing sex — nice! — it was time to pull the Dripstick out of the box. The box came with 10 disposable Dripsticks ($15), which meant they should cover 10 intercourses (or, as I like to call it, three years).

The instructions tell you to insert it while sitting. I put the Dripstick inside me and swirled it around. After about 15 seconds, it soaked up everything. (The instructions say if one doesn’t absorb all the fluids, you can try another, but I’d never give a man the satisfaction.) I found it totally comfortable — it didn’t itch at all, and I barely felt it was in there. My sexual partner asked if for the sake of my “experiment,” I might like to try it on the back end, too. It was honestly really sweet of him to think about me like that, but I said no.

There is, however, the issue of what to do with the Dripstick after you use it. Instead of getting to lounge post-sex, I had to run to the bathroom to toss the soaked sponge, rather than hold it in my hand. If you’re so worried about mess that you buy sex tampons, I imagine that the latter option is not appealing. You’re going to have to stand up to pee anyway, so the question is more about whether the Dripstick is preferable to toilet paper for cleaning yourself. (For what it’s worth, the Dripstick does a more thorough job).

I might not be the target market for this product because honestly, I’m quite tolerant of c*m. My future baby might be in there, and it’s usually organic. If it gets on my sheets, it gets on my sheets — I wash them every four months anyway. That said, I liked the product a lot. I’m wary of anything sex-related that puts the onus on women to manage, but I can’t think of a better way for men to take responsibility for this facet of intercourse. (Unless, of course, you made him apply the Dripstick, then throw it away.)

I’m of the opinion that if the cleanup is a drag, the sex isn’t worth it. But if you have an incredible time in bed and still find yourself exhausted by the resulting mess, the Dripstick will 100% solve that problem.

More like this
I Spent 2 Years Trying TikTok’s Dating Advice
By Kailynn Johnson
TikTok's Voluntary Celibacy Trend Has Sparked A Movement
By Lexi Inks
Why We Love Investigating Friendship Breakups
By Carolyn Steber
Ashamed Of Your Screen Time Stats? Here's How To Change That
By Alexis Morillo
Get Even More From Bustle — Sign Up For The Newsletter
From hair trends to relationship advice, our daily newsletter has everything you need to sound like a person who’s on TikTok, even if you aren’t.