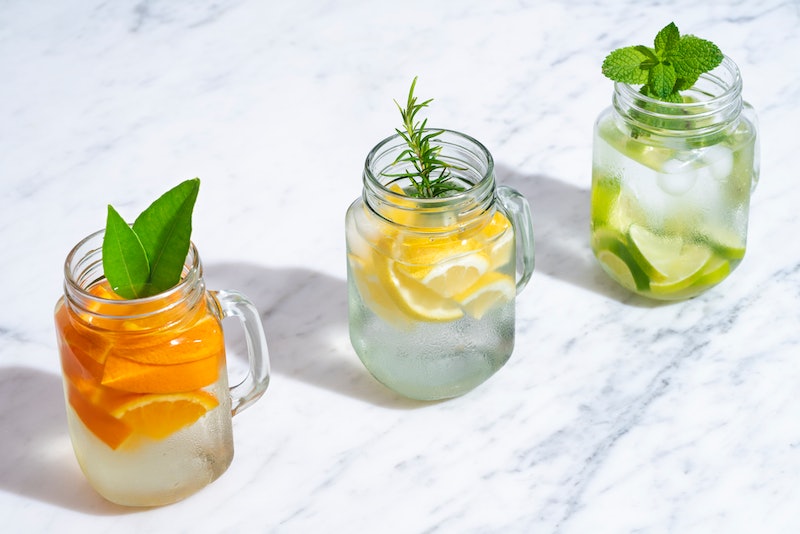 If you saw lots of people hashtagging their living room mocktail shots with #DryJuly, you might have wondered: What on earth is Dry July? And more importantly, was everyone doing it without me?

For anybody who was concerned they were drinking a bit too much through the pandemic, Dry July is a sobriety test-drive, like Dry January except it's hot out. It started as a fundraising tool for people affected by cancer in Australia in 2008: you pledge to quit drinking for two weeks, three weeks, or a month, and ask your friends to pledge money to support your journey. Then, the funds get donated. Since its inception, the official Dry July campaign has raised over $49 million, per its website. While July is Australian winter (making it a little more similar to our Dry January), people in the Northern hemisphere have participated in Dry July, too.

There's never a bad time to think about drinking less. Nearly three-quarters of people who did Dry January reported sleeping better, according to research published by the University of Sussex in 2019. A study published in Health Psychology in 2016 found people who stopped drinking for a month reported having fewer drinks than they had before for the six months afterwards. And another study published in 2015 discovered that people who don't drink inspire others around them to drink less, too.

Dry July is a cool concept, especially given the charitable component, but you don't need a calendar date to start a reset. You may feel intimated by staying away from alcohol for an extended period, especially if you've been drinking more than usual in quarantine. Ruby Warrington, the author of Sober Curious and podcaster on sobriety, tells Bustle that reminders can help you stay on track. "Keep a running list of all the positive side effects you notice from taking this break from booze, whether it's better sleep, no hangovers, saving money, or just having more time for you," she says. "This will help you focus on all the things you're making space for in your life by quitting, versus what you're missing out on."

"Have a plan for wine o'clock," Kate Bee, founder of The Sober School and a sobriety coach, tells Bustle. "This is the time of day between 4 and 8 p.m. when most people feel the strongest urge to drink. Plan ahead and think about what you'll do instead, especially for tough days." She advises using your time to try a lot of exciting alcohol-free alternative drinks, and thinking of a dry month as a test drive. "Even if you struggle to stop for a month, or find it's much harder than you expect, that's all good information to have."

There's no central Dry July foundation in the U.S., but you can still pause on drinking for a month, ask people to donate, and use the proceeds to support cancer research or other causes close to your heart. And if you do want a calendar date to help you start fresh with alcohol, well, Sober September is just around the corner.