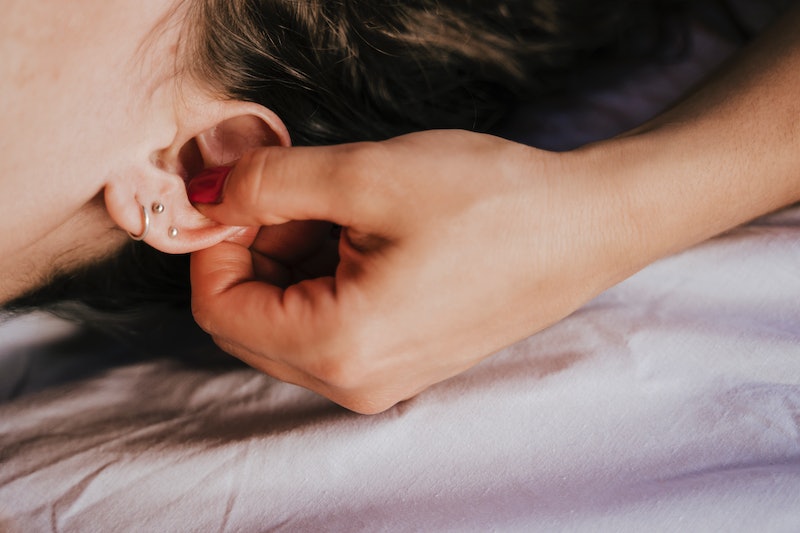 Sprinkled in between hair color transformations and duets from the DIY Ratatouille musical, you might have noticed something less charming populating your For You Page on TikTok. Over the last few months, earwax cleaning TikToks have become increasingly popular, as users share various wax removal practices to wildly receptive audiences. Videos with the hashtag #earwax have amassed over 760 million views, and in lieu of comments of disgust, viewers share words of encouragement: "Wow, so satisfying," and "I NEED that!"

In the videos, clean-ear hopefuls experiment with a variety of ear cleaning methods, from professional water irrigation, to at-home candling, and more intense investigations with wireless endoscope devices from Amazon. While you might think that the videos that show close ups of the actual wax removed might be TMI, even for TikTok, the extraction shot is the main event, much like pimple popping videos. People are tuning in for the big reveal. Comments condemn videos that cut out before the wax is dislodged: "I came for the wax!"

The phenomena of being wowed or soothed by the removal or cleaning of bodily fluids and waste is not new, as the enduring popularity of pimple popping vids can attest. According to psychotherapist Kelly Keck, L.M.H.C., part of the enjoyment that comes from watching ear wax removal is rooted in our own understanding of how good it can feel to have your ears cleaned. "It's a common experience and feeling that most people can empathize with," Keck says. "Think about pimple popping — it's similar in that it's an experience most people can relate to, and something that tends to be personal but is being normalized." Keck says that the combination of knowing how satisfying these actions can feel, combined with the heightened experience of getting to see a private moment gone public can make these videos doubly appealing. "It's a behind-the-scenes look of something really personal," she says.

While there's no harm in watching these videos (unless you have a sensitive stomach), excavating your own ears comes with some serious risks. According to internist Dr. Niket Sonpal, M.D., the internet's obsession with ear wax removal can promote myths about how ears work — with dangerous results. "The ear is a self-cleaning organ — for the average person, little to no maintenance is needed," he says. There are exceptions: "Some people produce more wax than others, and as we get older, wax can become harder in texture," he says, but the average person does not have a medical reason to be hunting their ear canals for wax goblins.

Instead, people should be leaving their ears alone. "Most doctors recommend refraining from sticking foreign objects into the ear to avoid damaging the eardrum or moving the wax deeper in," Dr. Sonpal says, which is the same reason Q-tips discourage their use as wax-removers. He singles out ear candling as a particularly dangerous way to clean your ears. "The practice is not backed by sufficient science." With ear candling, you're more likely to burn your ear or face while ear candling than you are to clean out your ears.

Water irrigation systems, on the other hand, are much safer and considered more effective, but should only be performed by a doctor with an irrigation system in-office. Dr. Sonpal says that if you let your doctor know that your ears feel clogged, they can easily arrange for this low-risk procedure.

As for the at-home endoscopes that can be ordered off Amazon featured prominently in these TikToks... Though Dr. Sonpal recognizes that they "seem cool," he suggests leaving this to the professionals in the office. "These devices can cause harm and confuse patients who don’t have the training to understand what they are looking at on their monitor."

So if watching other people get their ears probed is enjoyable for you, enjoy the endless treasure trove of gems on TikTok. Just make sure you leave the actual mining to a professional.

More like this
19 Latinx Therapists & Mental Health Experts To Follow On Instagram
By Kaitlyn Wylde, Naydeline Mejia and Lexi Inks
Why Everyone Is "Soft Tagging" Friends On Instagram Right Now
By Alexis Morillo
On TikTok, Tinned Fish Date Night Is The Latest Viral Food Obsession
By Emma Carey
How To Use Hobnob To Host Your Next Party
By Emma Carey
Get Even More From Bustle — Sign Up For The Newsletter