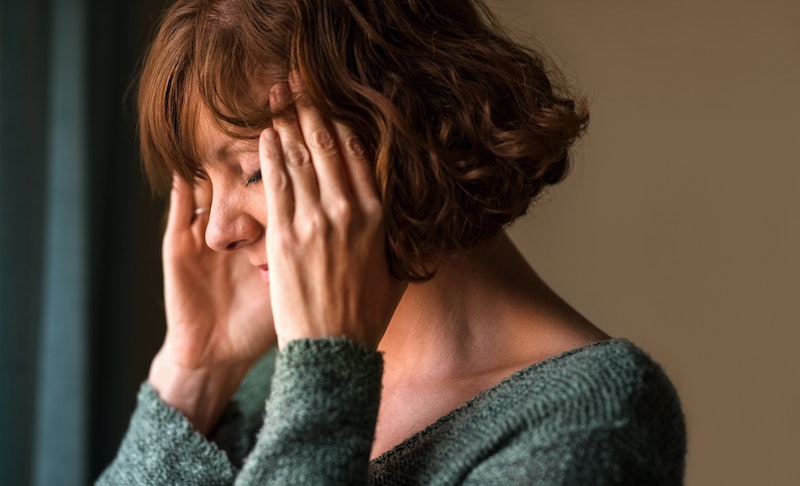 NickyLloyd/E+/Getty Images
By Brittany Leitner
May 20, 2021

Turns out, you’re supposed to be able to fall asleep within 20 minutes of your head hitting the pillow. Not me — I’m one of those people who can lay in bed for hours, going over mundane details like where I’ll grab coffee the next morning or the movie I’ve been meaning to watch. Between coping with a recent major life change and my general lack of sleep, I’ve felt like I needed to do more for my anxiety on top of my regular therapy regimen.

I discovered EFT tapping for anxiety while watching, of all things, the Teen Mom reunion on MTV. EFT stands for “emotional freedom technique,” and it draws on theories developed in Traditional Chinese Medicine: basically, you tap at certain points on your body while concentrating on emotional issues to channel — and, ideally, relieve — your anxiety. (One of the OG moms, Maci Bookout, explained that she was using it to cope with PTSD.) EFT tapping is linked to reduced anxiety, depression, and even blood pressure, per a 2019 study published in the Journal of Evidence-Based Integrative Medicine; reviews have found similar positive results across a wide swath of people.

Heather Hagen, LMFT, director of clinical program development at the Newport Institute, a national series of mental health and substance use treatment facilities, teaches the technique to patients with mild to moderate anxiety. “It focuses on the mind-body connection and is similar to a meditation practice,” she tells Bustle. While it’s akin to acupuncture or acupressure, Hagen notes that you don’t need to tap under the supervision of a therapist or instructor. I decided to practice EFT tapping in bed, with the idea that it would hopefully relax me to the point where I could drift off to sleep.

I watched a quick YouTube video to learn how to practice EFT tapping on my own. Per Hagen, a key part of tapping is identifying the problem you’re trying to “correct.” You verbalize why you need the anxiety relief and give yourself a specific, positive affirmation to focus on while you tap. I chose, “Even though everything is uncertain, you can trust you’re on the right path forward.” I then identified how stressed I felt and what level of stress I was aiming for. “My anxiety is at an eight, and I’d like to take it down to a six,” I said, figuring it was best to start small. Then I started patting each EFT point while repeating my affirmation to myself out loud.

I used both hands and two fingers to touch each point, starting at my hand, eyebrows, the side of my eyes, underneath my eyes, under my nose, on my chin, on my clavicle, under my arms, and ending at the top of my head. The idea is to feel stimulated while tapping, but not so much so that you feel pressure after you’ve moved on to another point. I tried to use about the same level of force you’d push an elevator button with, but lightly tapping my index and middle finger on the spot two to three times also felt nice. It was naturally pleasant to put pressure on the points of my face that aren’t touched very often, and I could feel a small release immediately.

After two rounds of tapping each of the nine touch points, I felt slightly better, but still not at my goal. I started again: “My anxiety is at seven and I’d like it to be at six.” I did two more rounds and by the end, I felt like my anxiety was where I wanted it to be. Just going through the motions of tapping helped me focus on something besides stressing over having to take public transportation the next day. I decided to keep going until I fell asleep, setting a goal of bringing my anxiety down to a two. After another two rounds, I drifted off. I’d been tapping for about seven minutes total.

How I Felt After EFT Tapping

The combination of voicing the problem I was feeling and concentrating on tapping certain points on my body worked to keep me grounded. If I’m working and feel anxiety creeping in, I’ll tap the points a few times to quickly bring those worry levels down. Hagen emphasizes that people dealing with severe anxiety or trauma should reach out to a therapist instead of trying EFT on their own, but for mild anxiety that pops up, tapping can be an effective way to channel that stress out of your body.

I still haven’t achieved my lifelong dream of falling asleep as soon as my head hits the pillow, but if Teen Mom has taught me anything, it’s that the mind-body connection is real.