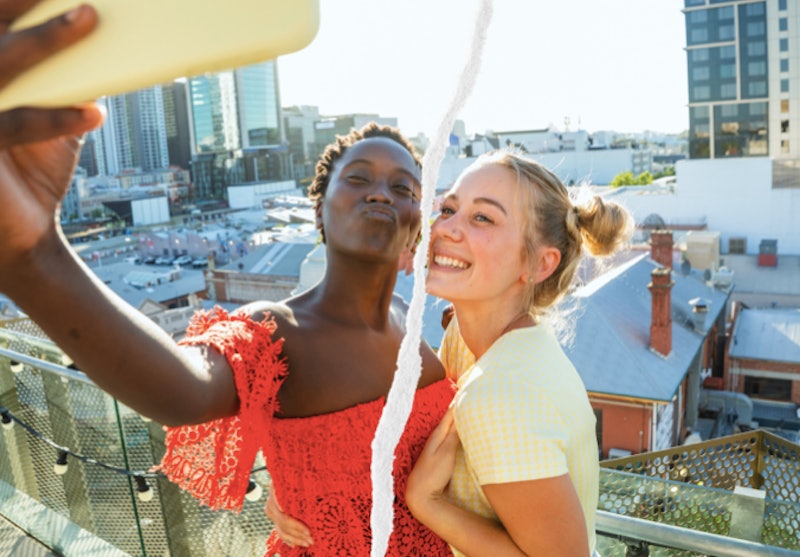 Work friends. 3 a.m. friends. Hometown friends. Spin class friends. Don’t-ever-hang-out-on-purpose-but-cling-to-each other-at-events friends. Pre-pandemic, there might have been a lot of people in your life that you’d think of as good buds, even if you wouldn’t ask every one of them to be your bridesmaid. For many people, the pressure cooker of the past year ended up weeding out weak links, shining a light on differences in values, and helping people decide it was time to cut ties. Now, people are emerging from the pandemic with fewer friends than they entered it with.

“The pandemic sped up so many processes that would have maybe taken years to occur gradually,” clinical therapist Caroline Given, L.C.S.W., tells Bustle about the seemingly “abrupt realizations” regarding our personal relationships. “There was a forced self-reflection time for many people.” Choosing to end a friendship, she adds, “indicates that you’ve gained knowledge and insight about yourself and have taken action to live a life that more closely aligns with want you want.”

Some of the rifts emerged around pandemic-specific issues. “Some of my friends had a lower standard of COVID-related precautions than I did, and it made me realize there was a much deeper philosophical void — it wasn’t just about germs, that was just the tip of the iceberg,” Marian*, 28, tells Bustle. One friendship was put on “an extended pause” because the person took it personally that Marian asked them to quarantine and get tested before visiting her. Ultimately, after heated texts, Marian says she felt her ex-friend was asking her to risk her health to prove her love. The two haven’t talked in months, and Marian doesn’t see a way forward, post-pandemic. “I don’t think that’s friendship — asking someone to do something you aren’t comfortable with that is actually really risky,” Marian says.

For Chloe*, 27, a blatant lack of boundaries exhibited by a someone whom she once considered a role model was the start of a messy end to the relationship. Strike one was when the now ex-friend entered her home without asking. “I spent hours cleaning everywhere she was with her little boys afterward.” Strike two came when the friend’s husband started trolling her online, leaving negative comments that threatened her “positivity bubble” she had been trying to cultivate for her mental health. Strike three was when Chloe confronted the friend about her husband’s behavior and was met with defensiveness and lack of empathy. Chloe says these issues likely wouldn’t have come to a head without the strain of the pandemic, but she’s grateful to see the “true fragility of the friendship” nonetheless.

While many friendships were challenged by in-person obstacles and immediate threats, others revealed their fractures over the phone. Lisa, 31, says that the weight of a demanding long-distance girlfriend became too much of a burden. “She would call me to complain about her life for hours and not ask about my life at all,” Lisa says. “I get it, we’re all going through things, but her drama isn’t what I would constitute as drama, considering what’s going on in the world.” The one-way relationship wore on her. Lisa ended it with a “slow ghost” over the course of six months and now doesn’t speak to her at all.

For Laine*, 27, months of tension boiled over in a group text that sent the chat recoiling from contact. “Within my friend group, it seemed like there was a competition for who was having the hardest time,” says Laine, who had lost her apartment and suffered a serious injury in February. She found it was hard for the people in her close circle to “hold space and empathy for each other.” Though she says the pandemic didn’t cause the falling out directly, “it exposed problems that have been there for years as irreconcilable.”

Laine says losing a friend of 15 years and navigating tensions with the group at large has been devastating. “The whole thing has made me reevaluate what friendship means to me, and sadly, that what I had with this person was never really a friendship.” At the same time, she’s had “some unexpected friends show up in beautiful ways” when she was going through a hard time. “It wasn’t anything profound — they just took the time to validate my pain and show respect for how I was handling it [and] it meant the world.”

For Lisa, the pandemic has been a time of reflection. “It made me realize that I can’t have people in my life who use me as an emotional waste bin,” she says. “I need to take better care of myself by setting boundaries with people like that.”

It might feel cold to end a long-term friendship after a year that’s been hard for everyone, but Given suggests thinking of it as “an act of self-love” that’ll be beneficial to both parties in the long run. “It’s a sign you know yourself better — not every friendship is meant to last a lifetime and it’s good to make space for the people who need to be in your life,” she says.

More like this
20 Women Reveal Exactly How Long It Took Them To Get Over Their Ex
By Amanda Chatel and Lexi Inks
Help! I Love My Boyfriend, But I’m Struggling To See A Future With Him
By Sophia Benoit
Are Quality Time & Gift-Receiving Love Languages Compatible?
By Lexi Inks
The Differences Between Polyamory & Open Relationships
By Lexi Inks
Get Even More From Bustle — Sign Up For The Newsletter