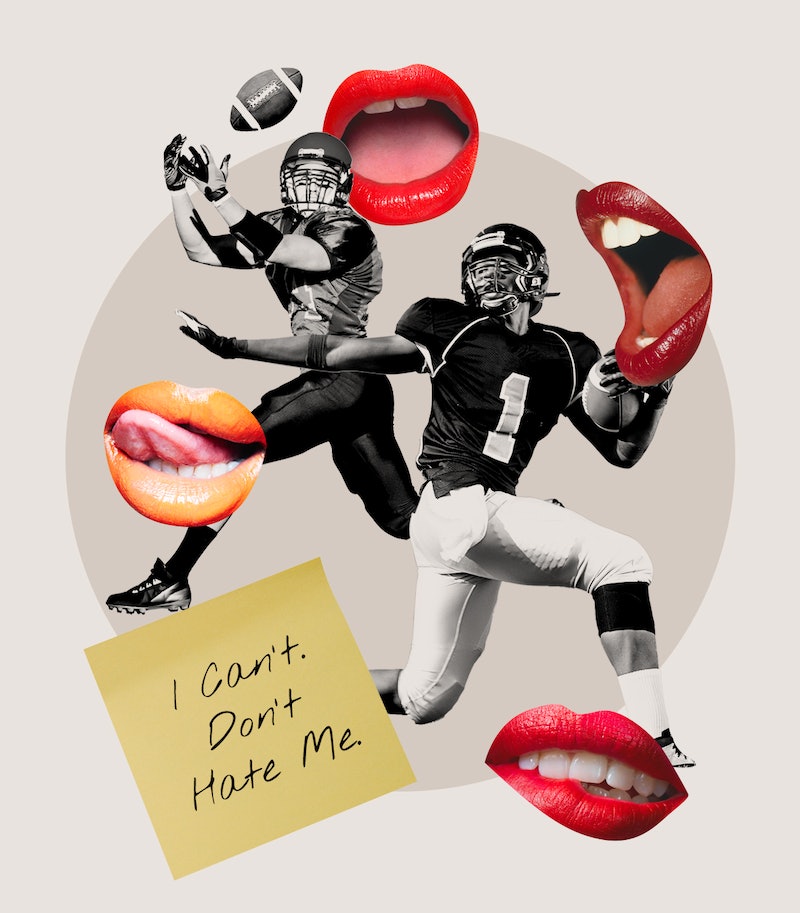 In I CAN'T. DON'T HATE ME., Bustle's Sex & Relationships Editor Iman Hariri-Kia gives you her unsolicited opinions on viral sex and relationships trends, free of charge. Unfollow her if you'd like.

I have a wee confession to make. All my life, I’ve been baffled by football. Not the game, per se, but the energy attached to the game. The screaming and the shotgunning. Waking up at an ungodly hour to tailgate and going to sleep in tears over an unexpected loss. The men I know treat the game with a cult-like mentality usually reserved for bearded oracles. Not to be heteronormative, of course. Anyone can devote their lives to hot wings and dog piles of sweaty players. But in my experience, this faction of divinity is particularly compelling amongst straight, cisgender men.

I’ve always struggled to understand the allure of football. There’s barely any dialogue, rarely an enemies-to-lovers storyline, and not one season has been produced by Shonda Rhimes. Granted, as a Middle Eastern woman in her 20s who became a writer because she lacks hand-eye coordination and can’t count past 10, I’m not exactly the target demo. I grew up alienated from most male-dominated sports. My parents are both immigrants, and my Baba’s version of “football” is kicking one’s enemies in the balls with your dominant foot. I also attended an all-girls school for 13 years, where I was shielded from the strange and somewhat violent impulses of the fragile male ego.

Alas, my first real exposure to the game was in college, when I was invited by friends to watch the Super Bowl — a tradition we’ve maintained ever since. And last Sunday, as I watched men in chaps roll around in what can only be called a passionate embrace, it hit me.

“There’s nothing sexual about football,” my boyfriend told me, as he watched the Buccaneers penetrate the Chiefs’ D-line.

To find out if my mind is really in the gutter or football is actually brimming with repressed sexual energy, I reached out to clinical psychologist and sex therapist Dr. Christopher Ryan Jones. “As sexual beings, we do associate nonsexual things with sex,” Jones tells Bustle. “Some people are attracted to the aggressiveness of sports like football. Others are attracted to the athletic conditioning and physical appearance of the athletes. Honestly, some are simply attracted to the uniforms.”

Sex and relationships therapist Cate Mackenzie takes the connection between touchdowns and turn-ons one step further, outlining a link between testosterone, adrenaline, and eroticism. "The football goal might feel like an orgasm," she tells Bustle. "There's a passionate exuberance, which is often testosterone- fueled, that can be a very similar release. Moreover, sport and sex can be goal-led."

Mackenzie is referencing the work sex therapist Ian Kerner, Ph.D., "coreplay, foreplay, and moreplay." In other words, both sports and sex can conflate success with penetration (or winning), which can be arousing to those turned on by energy, prowess, and power.

"Plus, where else can men roar, cry, and scream?" Mackenzie asks. "You can see their energy on their way to a match, like the sperm moving towards the egg."

OK, I know I'm oversimplifying things. Football, like all other topics of American discourse, can be multidimensional. The sport encompasses many facets other than intercourse, included but not limited to: teamwork, patriotism, Tom Brady in a peacoat, Tom Brady kissing his kids, Coach Taylor, brain injury, domestic abuse, and institutional racism.

Still, as your friendly neighborhood sex and relationships editor, I'll have to insist on doubling-down on my position: Football is so overtly sexual. And for what? Honey, if I wanted to stream smut in a socially-acceptable, public setting, I'd just rewatch Bridgerton for the upteenth time.

In fact, I think I'll go do that right now.