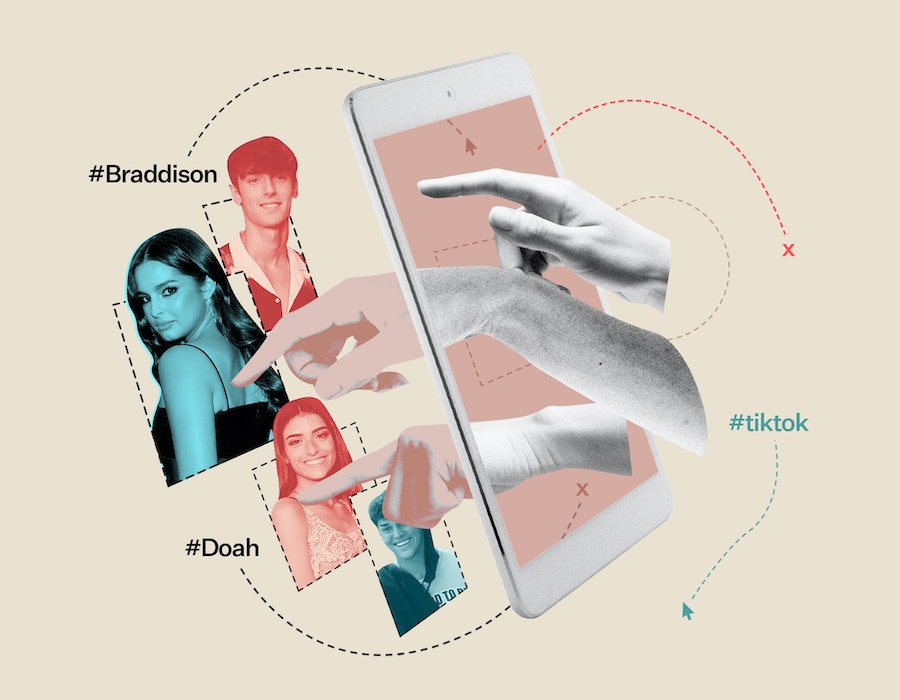 Daiana, 25, is on Instagram a lot. As the creator of a popular "ship account," a fan page dedicated solely to the desired romantic relationship between two characters, celebs, or influencers, she has to reply to DMs, post new content, and re-share relevant posts. Although it’s time-consuming, Daiana says it's worth the commitment.

"You meet people from around the world that have your same interests, no matter your age or culture," Daiana tells Bustle.

Daiana's a member of Adorable Representative M.C. for Youth (ARMY), a mega fandom of K-Pop band BTS. In April 2019, she started @itsvminworld, an account dedicated to shipping band members Jimin and Taehyung, that has more than 30,000 followers. "I wanted to show everyone how much these two love each other," Daiana says.

Ship accounts are run primarily by teenagers and interpret the every move of the "couple" to whom they're dedicated — their comments on each other's photos, their cryptic tweets, their TikTok duets. Unlike many online communities, shippers aren't in it for the money — they do it for the love of their fandom. The very essence of a ship, however, relies entirely on the hope that the two stars will hypothetically one day make their relationship official. But ships themselves have become as powerful as their subjects, if not more so. The couples, together or not, can profit from and create content specifically for their ship community. And in 2020, influencers need ship accounts as much as ship accounts need influencers.

The Origins Of Ship Culture

The term "shipping," short for relationship, originated in the early '90s by fans of The X-Files who believed the characters Mulder and Scully should fall in love. The ship was so powerful that it inspired the show’s writers to get the pair together. Janis, 25, created a Tumblr account dedicated to shipping Mulder and Scully when she was 14.

"It was all wish fulfillment," Janis tells Bustle. "You choose a character or person that you identify with, then create love stories for them — writing blog posts, sharing GIFs, and links to paparazzi photos or tabloid articles." After her teenage years, though, Janis grew self-conscious about the nightly hours she devoted to the Mulder-Scully ship. "I became aware that it was cringe," she says. "I started posting less frequently. Eventually, the page went dead."

Kenna, 21, jumped ship for a similar reason. A former One Directioner, Kenna admits that shame led her to delete her 2013 Harry Styles and Taylor Swift ship account on Twitter. "My freshman year of high school, a classmate said it wasn't cool to like One Direction like that," Kenna tells Bustle. "So I stopped."

"People feel closer to the famous now," Lorenz says. "Followers feel entitled to know everything about your personal life."

But in 2020, ship accounts are more mainstream than ever. Influencers have amassed large followings on Instagram, but ship communities gather simultaneously on multiple platforms. In quarantine, fandoms have more time — and freedom — to follow along closely as creators broadcast their lives. And when you're attending online class only a few hours a day, updating a ship account for a TikTok couple can feel like a full-time job. According to CrowdTangle, a tool from Facebook that tracks social media stats, @Braddisonupdates, a ship account on Instagram dedicated to newly-confirmed TikTok couple and content creators Addison Easterling and Bryce Hall (aka "Braddison"), has amassed more than 35,000 followers since it was founded in December 2019. The account's followers increased 25.53% from April to May following Hall's drug arrest on May 27, which Easterling recently shared marked the couple's private rekindling. Even without public acknowledgment of their relationship, shippers were — correctly — on the case.

The same can be said for @dixiesnoah, an Instagram account with more than 21,000 followers dedicated to the ship of now-couple singer (and breakout TikTok star Charli D'Amelio's sister) Dixie D'Amelio and content creator Noah Beck. When D'Amelio broke up with then-boyfriend Griffin Johnson following cheating allegations in August, "Doah" shippers with accounts devoted to D'Amelio and Beck — then just friends — experienced real-time traffic growth. Per CrowdTangle, @dixiesnoah received a 37.86% follower increase from September to October. Although the couple was weeks away from making it official, shippers moved full steam ahead.

New York Times internet culture reporter Taylor Lorenz tells Bustle that ship accounts aren't just popular — they're influential. "Social media has become a perennial matchmaker for famous people," Lorenz says. "The tabloids used to play more of a role in this, building up these real or not real relationships. Now Instagram has taken on that role."

In 2020, our pop culture obsessions have evolved. Early-aughts gossip columns are to reality TV (think The Simple Life or The Hills) what today's ship accounts are to TikTok influencers (like Blake Gray and Amelie Zilber). But Lorenz suggests social media takes infatuation a step further by creating reciprocal conversations between fans and these nouveau celebrities. "People feel closer to the famous now," Lorenz says. "Followers feel entitled to know everything about your personal life."

"Shipping" isn't just one-sided, either: Fans might be steering the ship, but many influencers appear happy to get on board. According to Lorenz, relationships that form under the shipping microscope play into the "media ecosystem," creating mutually beneficial clout for everyone involved. A quick look at D'Amelio and Beck's content since announcing their relationship — YouTube Q&As, photo shoots, music video cameos — suggests the couple knew how to make the most of their growing popularity. As for "Braddison," the couple's pre-confirmation matching Halloween Instagram posts were both individuals' most-liked at the time.

"Shipping is a content opportunity," Lorenz says. "Dating someone who is also famous is an opportunity to get some of their followers and for them to get some of yours. It creates drama and intrigue and generates attention."

For example, newer influencer and dancer Zoi Lerma, 19, (who has a cool 4.5 million TikTok followers) was shipped over the summer with fellow TikToker and musician Baron Schoenvogel, 20, ("Zaron") until the couple made it official in mid-October. Lerma tells Bustle that being the subject of a ship can be fun but messy and overwhelming, too.

"In the beginning, people were already making relationship edits and recording everything we did on Live and posting it," she says. "I would sometimes find stuff out [about Baron] from the Zaron accounts. Everyone was so invested in our relationship that they were picking up on things that I wouldn't. I think there’s an added pressure to act a certain way when you’re just friends and doing it for the videos, but when you’re actually interested in each other and there’s potential for a relationship, it’s fun to see that other people want it to happen as much as you do."

Lerma and Schoenvogel try to strike a balance between getting to know each other privately while posting about that journey publicly. "When you upload videos to your account, it’s inevitable that people are going to speculate and be interested in it," Lerma says. "Not only do your fans love your content, but they now also love you and the other person collectively."

Ships Can Outlive Their Couples

But what happens when one half of a ship confirms a relationship with someone else? Or a ship evolves into a real couple, only to go through a very public breakup? Their digital fandom, who have devoted thousands of hours of their lives to the duo, have a choice to make: jump ship or drown.

Some accounts will remain loyal to their ships, even after all hope is lost. Kenna, the former One Directioner, explains that it all boils down to loyalty. "Now that celebrities and public figures have the opportunity to share their thoughts and feelings, fans feel more loyal," she says.

But sometimes, shippers don’t jump — they’re pushed overboard. When scrolling Instagram ship accounts, it’s common to see a new account bio listing an old handle and the follower count at which it got deleted by the platform. According to Instagram, accounts can be removed for violating the site's guidelines by bullying and harassment, impersonation, or not meeting the age requirement of 13.

Lorenz maintains that modern ships don't end, but change course — especially if a majority of the shippers are young. "Some will become ‘stan’ accounts for whoever they sided with in the breakup," Lorenz says. "They'll warp and broaden out. The hallmark of being a kid is moving on from things really fast. It's part of figuring out who you are."

More like this
Hinge Added A Video Prompt Feature, So Get Your Camera Rolling
By Hannah Orenstein
19 Latinx Therapists & Mental Health Experts To Follow On Instagram
By Kaitlyn Wylde, Naydeline Mejia and Lexi Inks
On TikTok, "Cbat" Has Been Named The Worst Sex Song Ever
By Lexi Inks
Are Quality Time & Gift-Receiving Love Languages Compatible?
By Lexi Inks
Get Even More From Bustle — Sign Up For The Newsletter