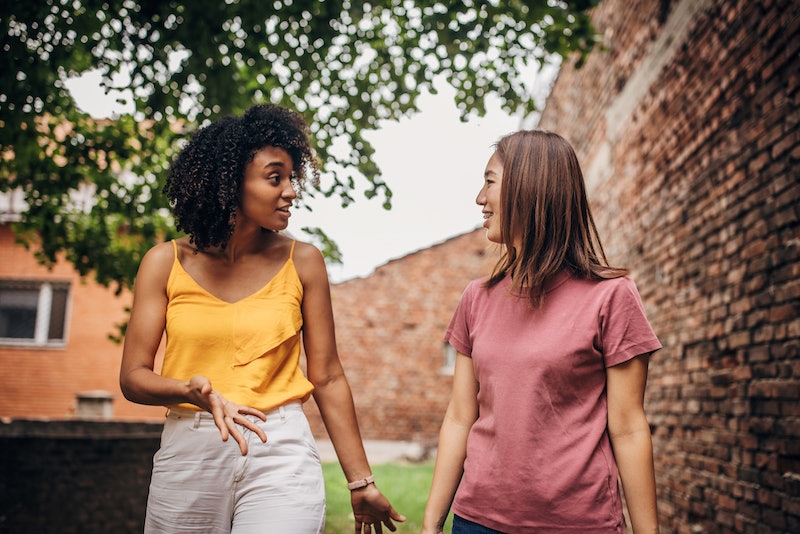 At her first park picnic since the start of the pandemic, Kristin, 30, a women’s health care worker in Denver, Colorado, tells Bustle she found herself feeling “verbally rusty.” Though she had been keeping in touch with her friends over Zoom and through the group text, the live chat made her self-conscious about her conversational skills. “I’ve been experiencing brain fog for the last year, but trying to keep up multiple conversations with different people at the same time over lunch highlighted a new level of fog — I keep forgetting words.”

Not the kind of words that are tricky to recall in a candid conversation, either, like SAT leftovers. “Really basic words, like ‘appointment’ or ‘brie’, just totally disappeared,” Kristin says. Since that first hang, Kristin says she’s noticed “an intense fogginess” while trying to retrieve words she’s more than familiar with.

This phenomenon, called lethologica, appears to have become more common as people have increased their in-person socializing. Over the past six months, according to Google Trends data, there’s been a bump in people searching for why they’re forgetting words. And as people prepare to return to their offices or campuses in person, the issue of spacing out on ordinary words takes on a new level of urgency.

According to neuropsychologist Sanam Hafeez, Psy.D., heightened levels of stress are to blame for these social mishaps. “Before the pandemic, many people experienced acute stress, which can cause the body releases stress hormones cortisol and epinephrine, but the pandemic has led many people to become chronically stressed, which means that these stress hormones are being released into the body at much higher rates than usual,” she tells Bustle. The constant cocktail of cortisol and epinephrine also impacts the brain’s ability to think, retrieve memories, and learn new material, she says.

For people who had COVID, this occurrence can be even more profound. Hafeez points to a study published in January that showed increased levels of cytokines (molecules that cause inflammation) in the fluid surrounding the brain in people with cancer, even weeks after the COVID infection cleared. “When one’s brain is inflamed, certain brain functions are impacted, likely contributing to brain fog. Other components, like lack of sleep, stress, anxiety, or dietary changes, can also lead to lethologica,” Hafeez explains.

“I can say with confidence that in May, just after I was getting my strength back from COVID, that cognitively I could see the words in my head but found it delayed or hard to explain what I was thinking,” Diegnan, 32, a real estate agent, tells Bustle. It got so bad, Diegnan says, she forgot Ryan Gosling’s name. “I thought that was odd.”

While this phenomenon might be flexing a peak right now, Kelly Elizabeth Wright, an experimental sociolinguist and Ph.D. candidate at the University of Michigan, says it’s actually pretty common to suddenly not know what you’re talking about. “Anomia, which is a difficulty retrieving known words, can happen as a symptom of exhaustion, certain illnesses, or depression — all which inhibit the regular patterned firing of neurons in the language centers of the brain,” Wright says. She adds that the pandemic has caused people to experience those symptoms on a much larger scale. And with increased social interaction over the summer, there’s a spotlight on a condition that’s likely been existing under the radar for much of the last year and a half.

Ultimately, brain blips like these are deeply annoying, but not a cause for concern. “Forgetting a word under the age of 35 is a normal, age-related change,” Hafeez says. “From our late 20s and onward, our mental flexibility starts to become a little less efficient,” she adds. If you find that you’re frequently forgetting words you should know, talk to your doctor. Hafeez notes that if you’re worried about your memory, games like Sudoku, crossword puzzles, and mediation can help to reduce brain fog. But even if you master all the puzzles and sleep through the night, you might have bouts of the tip-of-your-tongue syndrome. At least now you have a word for it.