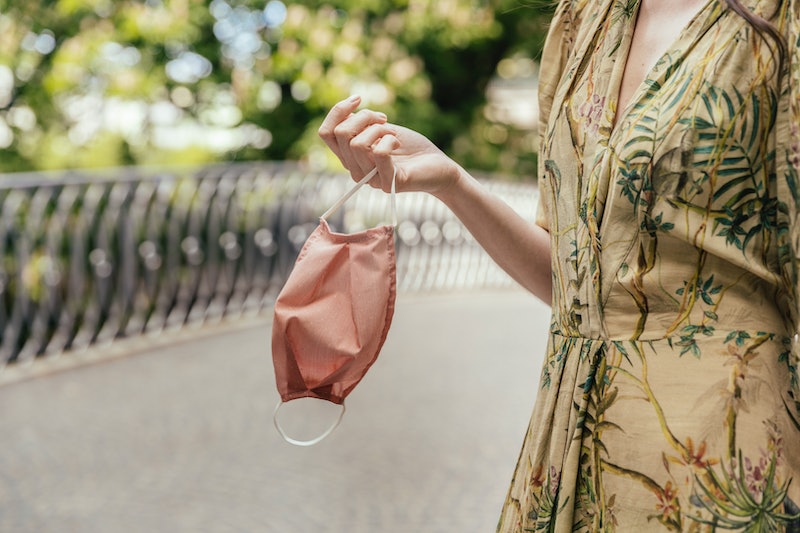 As states begin to reopen, people are technically allowed to return to a version of normal. But COVID cases remain stubbornly high, mainly because people still aren't wearing masks or practicing social distancing. With restaurants and bars open and restrictions on socializing dissipating, there’s a lot of gray area between what you can do, and what you should do to stay safe. This dissonance is causing tension between friends who have different feelings about how to protect themselves from coronavirus.

Bri, 30, only socializes with the people she’s been quarantined with for months, hasn't traveled, and is avoiding public areas whenever possible. But since restrictions in New York, where she lives, were lifted, she's felt a strain in one of her friendships. “We’re not in a fight, but I’m definitely very annoyed with a friend who just went on vacation and posted about it online,” Bri tells Bustle. “I think it was a really irresponsible thing to do and I’m having a lot trouble separating my judgement of her actions from our friendship." The friend, Rachel*, few to the Caribbean for vacation, and tested negative for COVID-19 when she came back. Rachel, 29, tells Bustle she "needed to get away after months stuck in a tiny apartment alone," and felt she had been very safe, wearing a mask the entire time, keeping away from crowds, and sanitizing regularly. She says she hoped Bri would be more understanding.

Clinical therapist Caroline Given, L.C.S.W., says there’s no excuse for anyone to claim that they don’t know the severity of the virus and aren’t aware of the risks. “If you have an internet connection, you know what’s going on,” she says. "At earlier stages of the pandemic when there were more mixed messages from official channels, educating others on why you’re choosing to wear a mask and not engage in certain activities was more productive. I think people who aren’t going to practice appropriate measures are making a choice at this point." Thanks in part to that mixed messaging, friends with whom you share many other values may find themselves making drastically different choices when it comes to staying safe.

Given explains that it’s more productive to assume that your friends have the same information that you do, and are making different choices, rather than assuming that you are in a position to educate them and change their behavior, which could lead to more tension. "I tell my clients that all behavior is information. If people are doing things on social media or in front of you that feel risky, take that into account and weigh your decision about how much contact you want to have with them accordingly."

Though of course it depends on the friendship — how close you are, how comfortable you are sharing your feelings with each other — Given says that sharing how you feel about your friend's pandemic practices could lead to a decrease in goodwill in the relationship. What’s more, it likely won’t change their behavior. Instead, Given says to focus on your own path and create boundaries as you need them. “People are not always going to adhere to what makes you feel safe, and often this is not done malevolently or even consciously,” she says. "You ultimately only have control over yourself."

By now, it's an established best practice to have open talks before you see someone IRL about who else they've seen, whether masks or distance were involved, and whether they've recently traveled. But socializing with someone who doesn’t think or weigh risk in the same way you do, it’s a gamble — regardless of what they assure you. If you plan on seeing friends for distanced hangs, and their travel history or lifestyle choices make you feel uncomfortable, it's OK to set boundaries. You can say you'll see them at the park, but only with separate blankets and masks on the whole time, or that you'd rather stick to virtual meet-ups for now.

Given suggests setting the tone for these conversations by couching it in terms of what you're comfortable with. Tell them what precautions you’re taking and what limits you’re following. “I think we have a habit of being overly passive when we’re fearful that a conversation will reveal a discrepancy in beliefs between us and another party, but there is nothing inherently shameful about having a boundary,” she says.

It can be hard to bite your tongue, especially when you feel that a friend is putting themselves or those around them in danger. Given says it can be damaging to use moralizing or judgmental language, no matter how close you and your friend are. “The harsh reality is that most people won’t be shamed into making better choices. I think the best you can hope for on the education front is that someone might ask you why you have a certain boundary or are making certain decisions and you can have a response prepared that could be educational.” Essentially, the best way to help your friends who aren't being safe is to lead by example.

Though Bri is frustrated by her friend’s choices right now, she’s not ready to leave a decade-long friendship in the dust just yet. “Rachel offered to come visit me at the end of the summer and I had to tell her that I couldn’t host her unless she quarantined for at least two weeks or took a test before coming,” she says. “I haven’t heard back yet whether she’s willing to do that for me. I’m not holding my breath.”