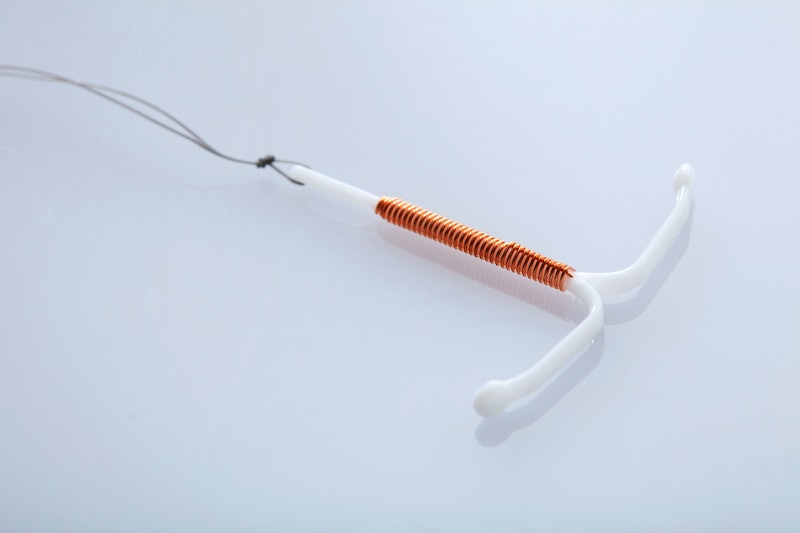 Long-term contraception is an attractive option for many people with uteruses for a million different reasons. The fact that IUDs protect you from pregnancy for a long time is a major one. With President Trump pushing for a conservative majority on the Supreme Court that could affect access to reproductive healthcare for years to come, it's looking better than ever. If you have one already — perhaps inserted in late 2016 — you might be doing some mental math around when you need to replace your IUD, and what the COVID pandemic might do to that timeline.

"The process of getting an IUD replacement is basically the same as when patients have had them inserted initially," Dr. Natasha Spencer M.D., an OB-GYN at Orlando Health Physician Associates, tells Bustle. "It is typically not as painful or uncomfortable."

Dr. Naglaa Rizk M.D, assistant professor of obstetrics and gynecology at Rutgers University and consultant for at-home lab testing company Everywell, tells Bustle that it's a good idea to try to go to the doctor who inserted your IUD in the first place. If you have to go elsewhere, call your previous doctor and ask for a copy of your records. You should have a copy of these anyway, so you know when to replace it — Mirena IUDs last for up to six years, Paragards last for 10, and other brands have different expiration dates along that spectrum.

Know that it won't be a quick, in-out appointment. Removing an IUD, Dr. Spencer says, takes longer than inserting it in the first place because it's a more delicate process. It involves using graspers or forceps to grab the strings and pull it out, which should only cause mild cramps. If it hurts a lot, it's because the IUD wasn't positioned correctly.

"If the strings are not visible, then more steps may be needed to retrieve the IUD, such as an IUD hook or alligator graspers that can both be passed through the cervix and into the uterus," Dr. Spencer says. At that point, you might need to have cervical dilation, which can be uncomfortable, but you can get a paracervical block, which relieves the pain. Once that's done, the insertion of the new IUD can go ahead. Dr. Spencer also recommends pre-treating yourself with 600 to 800mg of ibuprofen or Mortrin up to 45 minutes to an hour before your appointment. "This will help with any cramping that may occur and also can relax the uterus."

How To Schedule An Appointment To Replace Your IUD

When it comes to replacing your IUD during the pandemic, scheduling and preparation are key. "Going to a doctor’s appointment has the same precautions and risks as any other outing, regardless of the type of visit during the current pandemic," Dr. Spencer says. Have a conversation with your OB-GYN about the safety measures they're taking, including social distancing and hygiene, and what you need to do before the appointment: they may ask people to wait in their cars rather than in waiting rooms, for instance, or ask you to complete paperwork beforehand. "Your doctor may be able to cut down on the time you physically spend in the office by handling other questions during a virtual doctor's visit," Dr. Rizk says.

You should also schedule the appointment during your period, if you still have one. "Some women report that IUD removal is a little easier during or after menstruation," Dr. Rizk says. Wear your mask to the appointment, sanitize your hands, and take a pad in case you bleed afterwards. And if you get any symptoms of COVID-19 beforehand, inform the doctor's office immediately.

Depending on your location, your OB-GYN might be closed for in-person visits. Planned Parenthood advises that if you can't get your IUD replaced by the time it expires, you should use a back-up birth control method, like condoms. Though it's best to get it removed as close to the expiration date as possible, it's not dangerous to leave it in, says Dr. Spencer, though your risk of pregnancy and ectopic pregnancy may increase. Even if you're worried, don't take matters in your own hands. "Never try to remove it on your own!" Dr. Rizk says. Just make an appointment for as soon as you can.