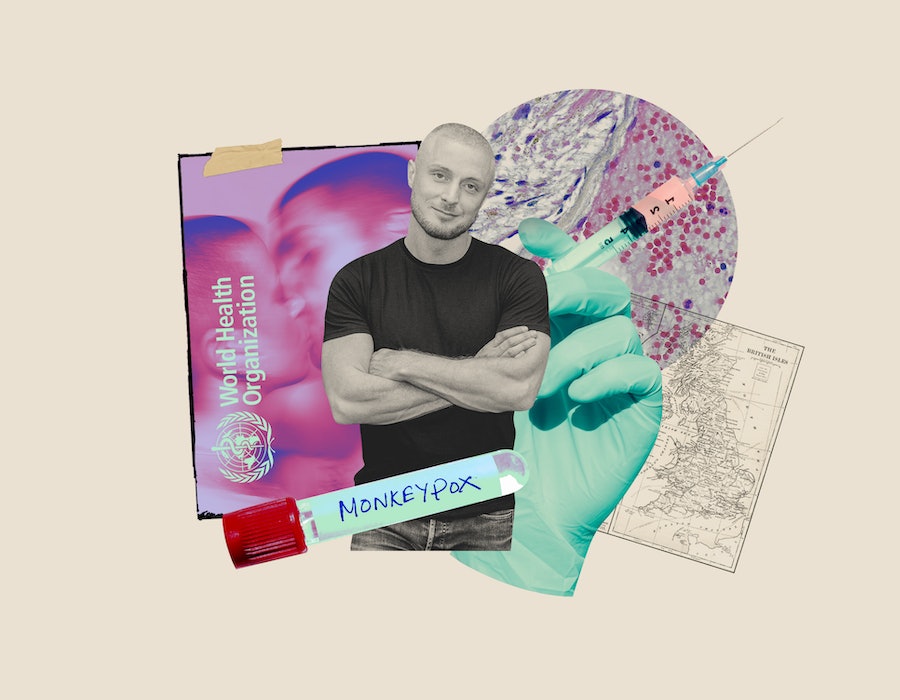 As a leading sexual health activist, Greg Owen has fast become a trusted voice on all things Monkeypox in the UK. “I’ve been flooded with DMs over the past week,” he tells me over Zoom. “People are really anxious.” As of Jul. 25, there were 2,432 confirmed cases in the UK, the majority of cases reported in London. And as Monkeypox continues to surge in the UK and beyond, media coverage and social media discourse have sparked intense debate, especially about how they contribute to the harmful stigma against gay and bisexual men and sexual health. Amid the noise, however, the likes of Owen and others are working to eradicate the spread of Monkeypox in the UK by calling for effective public health messaging, the speeding up of the vaccine rollout, and demanding support for those affected by the virus.

On Jul. 23, the World Health Organisation (WHO) declared the Monkeypox outbreak a Public Health Emergency of International Concern. That same day, international research showed that outside of endemic regions (remote areas of Central and West Africa) 99% of cases had occurred in men; 98% of whom were men who have sex with men (MSM). The data also found that 95% of those infections had occurred through sexual activity. It is also important to note that many of the reported cases across Europe and the United States in 2022 have “no established travel links to endemic areas.”

Owen, who co-founded I Want Prep Now in 2015 to campaign for accessible pre-exposure prophylaxis medication (PrEP) describes the WHO’s declaration as “entirely appropriate and responsible.” It’s vital, he says, “that we move fast while we still have the opportunity to contain this outbreak.”

“Monkeypox has displayed the worst kind of global health inequalities,” he continues. “I’m disappointed to see some cis white gay men on social media shouting ‘systemic homophobia’ in response to the inadequate handling of this current outbreak, but at the same time are completely silent about how Monkeypox went largely ignored in West and Central Africa for decades.”

When details of the UK outbreak first broke, sexual health clinics, activists, and campaigners — such as Dr Will Nutland of PrEPster and The Love Tank, and the Terrence Higgins Trust’s Alex Sparrowhawk — jumped into action. Owen joined them on the frontlines. “These people are doing an amazing job,” he tells me. “They’ve been the ones picking up the slack so far. Many of us are working until midnight and over weekends trying to come up with solutions and effective messaging.”

Here, Owen unpacks the divisive Monkeypox Twitter commentary, the UK government’s initial response to the outbreak, and what we should be doing to support those in high-risk groups.

Some have said the WHO’s announcement plays into the harmful stigma surrounding gay people and sexual health. What do you say to that?

There is nothing homophobic about sharing epidemiological data. What is homophobic, in my opinion, is the notion that we should just “keep an eye” on monkeypox because it only affects gay and bisexual men and other men who have sex with men (GBMSM). We have got to ask ourselves why more isn’t being done to increase access to testing, treatment, and vaccines. It is not acceptable.

What do you make of comparisons that have been drawn between the situation now and the HIV/AIDs crisis of the ‘80s?

Try to imagine what this outbreak must feel like for gay men my age (42) and older. There is a virus ripping through the gay and bisexual community, which in some cases presents as painful sores. We are immediately transported back to the ‘80s and ‘90s when countless young gay men were branded with similar marks, now known as Kaposi's sarcoma caused by HIV/AIDs. These were often the first indicators of imminent death. Our community has not healed from that yet.

We have got to ask ourselves why more isn’t being done to increase access to testing, treatment, and vaccines.

I don’t think we are going through those days again with Monkeypox; our community has taken so many lessons from the legacy of HIV/AIDs. Queer folk are incredible caregivers when their peers, friends, chosen family, and lovers need them. We are our own best defence right now.

The UK government’s response to the Monkeypox outbreak has come under fire. What do you think?

Have the government acted quickly enough? No. Has the Monkeypox public health messaging been clear? No. I think the “wait and see what happens” attitude is extremely problematic and dangerous, and very typical of the government’s approach to minority communities.

With COVID-19, a vaccine was developed and delivered within a year. For Monkeypox, we already have a vaccine that works, but the government hasn't ordered nearly enough doses. We have to ask ourselves, why? We need equitable access, where no one gets left behind.

There’s also a lack of any kind of accountability for the UK’s response to the outbreak. Yes, as the most affected community, we can mobilise and help to eradicate the virus — but the people at the top need to be doing more. We’re literally doing all the work here.

I feel like the UK Health Security Agency, NHS England, and the Department of Health and Social Care are hedging their bets with Monkeypox. But we are not casino chips on the gambling table of public health.

Other than the vaccine, how can people best protect themselves from Monkeypox?

We’ve had to ask GBMSM to do all the heavy lifting. This includes educating themselves and each other, formulating their own risk reduction techniques, reducing their sexual interactions, and being vigilant with any skin-to-skin contact — not just during sexual activity.

For our allies out there, using your voices to call for the vaccine programme to be sped up, properly resourced, and upscaled is a great way to offer your support. However, it’s important for allies to keep the focus where it needs to be — gay or bisexual men, other men who have of other identities (including nonbinary folks, and women both trans and cis) who have sex with GBMSM — because they are the people most at risk.

We need to do our best to contain and eradicate this. Not just for our health, but because of the wider implications. People are currently required to isolate for 3 weeks if diagnosed, with zero financial support. It isn’t sustainable.