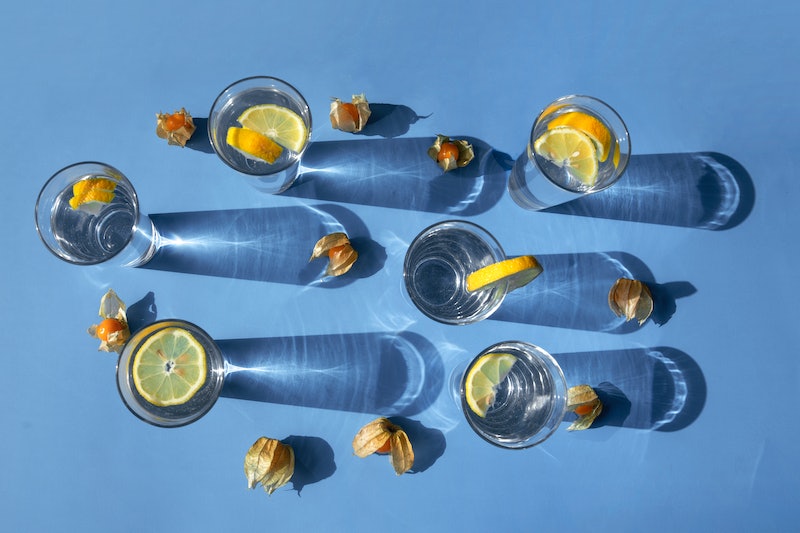 I tried giving up alcohol for the first time in January 2014. My hangovers had been getting progressively worse since I graduated from college, but at 24, the idea of going sober permanently felt impossible. Everyone around me was still partying; my friends and I met for happy hours after work and spent our weekends at bars or boozy brunches. Drinking was as familiar to me as my routine spin class. But it seemed like I always had a different experience than my friends when we went out drinking — I was the first one to burst into tears, cross the line from buzzed to blacked out, or spend the next day holed up in my apartment with the shakes.

I knew I needed a break from drinking, but I was scared of what admitting that alcohol and I didn’t get along would mean. I didn’t know anyone who was sober, and the concept scared me. It sounded, quite literally, dry. I didn’t want to be deprived of an elixir that, when it wasn’t beating me up, helped me feel beautiful.

Dry January, a month-long break from drinking, was a convenient and socially acceptable opportunity to remove alcohol from the equation without having to take a closer look at my drinking habits or explain my decision to my friends. I worried about what people would think of me if I wasn’t drinking, full stop — how would I explain ordering a seltzer outside of Dry January? The fact that it was a public health campaign felt like enough permission to take the break I was so desperately craving.

I was sure that my successful Dry January meant that I didn’t have a real drinking problem.

At the time, Dry January was a relatively new health trend with minimal research on its long-term effects. Dry January was started in the UK in 2013 by the charity Alcohol Concern, and became a public health campaign the following year. Erica Lubetkin, LMHC, a licensed therapist specializing in substance use disorder, points out that it was advertised as a healthy challenge for the New Year. Since then, Dry January has reached millions of people across the UK and the United States. There’s even (some) science to show its benefits: A 2016 study of over 850 adults, published in the journal Health Psychology, showed that “abstaining from alcohol for a month improved liver function, blood pressure, and markers associated with cancer.”

I sailed through the month, relieved by the fact that I could go 31 days without a drink. I threw around phrases like “increased energy” and “clearer skin” when asked about my experience, recycling the benefits I heard people cite after switching to a plant-based diet. I skipped out on dates and concerts, hibernating for the month with Grey’s Anatomy reruns and a stash of seltzer. I enjoyed waking up well rested, pleased that I didn’t have to cancel my Sunday morning workout class due to a hangover. Before going to sleep every night, I snooped around the #dryjanuary and #sobriety hashtags on Instagram, combing through strangers’ posts to see how everyone else was surviving Dry January. People looked happy and clear-eyed, writing inspirational captions that I curled into the palm of my hand before drifting off to sleep.

But the truth was, I didn’t feel all that different. And by the time the month ended, I was no closer to understanding my drinking habits than I had been 31 days earlier. In fact, I was sure that my successful Dry January meant that I didn’t have a real drinking problem. In my mind, someone with a truly dysfunctional relationship with alcohol would experience immediate cravings or be unable to go several weeks without drinking. I was sure my break was just what my body needed to recalibrate its reaction to alcohol, magically transforming me from a drunken duckling to a swan who knew how to moderate. I thought I would celebrate the end of my month-long break with a champagne toast.

The language we use around Dry January can make it feel like just another health trend, akin to trying celery juice or joining a new gym.

So I was genuinely perplexed when alcohol and I picked up right where we left off that February: with nights that faded to black more often than not, and hungover mornings spent struggling to string my hazy memories together. My drinking was still messy, but I was sure that my ability to take a 31-day break meant sobriety wasn’t the answer for me. I spent the next three years clinging to the concept of controlled drinking like a life raft, never quite able to keep myself from tipping overboard. I went out on the weekends fully intending to only have two or three drinks, only to find that once I started drinking, I rarely wanted to stop. My brain was an expert negotiator, sweetly reminding me of my stressors whenever I tried to leave the bar, imploring me to have just one more.

Ultimately, I needed the circumstances around my drinking to get worse — the blackouts, the hangovers, the shame I felt the next morning when I couldn’t remember how I had gotten home — to become convinced that it was time to retire from alcohol for good. When I finally got sober in 2017, I realized that my first dry stint hadn’t proven anything. Rather, it had only delayed the inevitable.

The language we use around Dry January can make it feel like just another health trend, akin to trying celery juice or joining a new gym. But Lubektin cautions that oversimplifying sobriety can keep some people from confronting the truth about their alcohol use.

“When we talk about Dry January, it is often not recovery related,” she says. “Dry January can be a great reset for many, but for those who are seriously thinking about their drinking, Dry January is best accompanied by support exploring the behaviors associated with drinking, cultivating coping skills, understanding the reasons for destructive alcohol use, and finding ways to build community and support.” I can personally attest to the fact that my own lack of coping skills and external support prevented me from making any real progress the first time I attempted Dry January. “If you just white knuckle your way through the month,” Lubetkin says, “what did you really get out of it? Most likely very little.”

Over the past few years, Dry January has become a mainstay of healthy New Year’s resolutions. It’s heartening to see more people examining their relationships with alcohol and challenging themselves to experience social events sober. But if you’re like me, Dry January might not work as a simple reset after the holidays. It could be part of a larger cycle of bingeing and restricting, or a last-ditch effort to prove to yourself that you’re fine.

Taking a break from alcohol was easy. But when I finally got sober and sought out help from a therapist, I learned that the patterns around my alcohol use were more significant than my ability to temporarily eliminate it. That was when the real work started — and it was also when true freedom became possible.