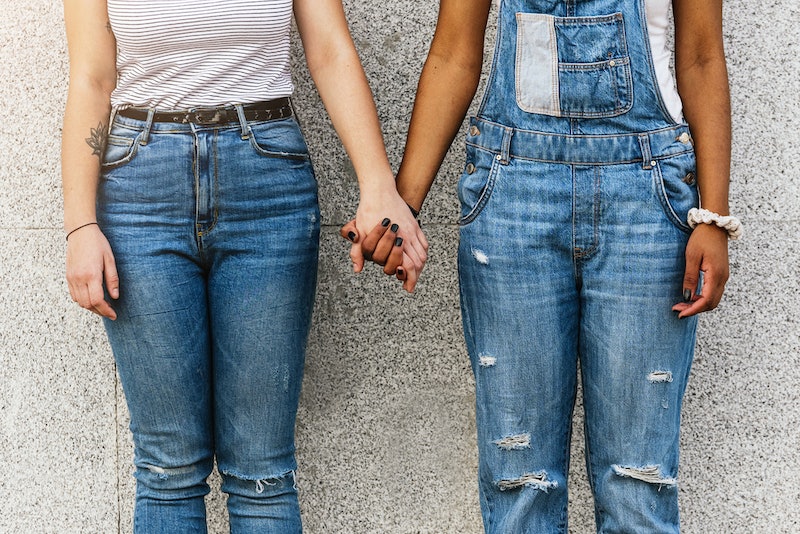 Although we live in a culture that's often alcohol-centric, drinking isn’t for everybody. Whether the decision to be sober has to do with a substance use disorder or a general distaste for alcohol, being sober in a society that places such importance on drinking is far from an easy thing to do. As someone who has a complicated relationship with alcohol myself, to be sober in such a culture feels brave.

From the acceptance of drinking in social situations, to the prohibition era, to drinking on the job à la Mad Men, what’s “normal” in regards to alcohol consumption has changed over the years. But while alcohol use has been accepted, being sober — a choice that is life or death for some people — has never really been “in fashion,” per se. Because of this, when someone does make the choice to be sober, it can feel a little scary.

"At first it’s completely disorienting to go from living a life that’s revolved around drinking ... and then suddenly have everything be so real,” Anna David, CEO of Light Hustle Publishing and a New York Times bestselling author, tells Bustle. “Feelings can be so raw."

“Dating while sober makes you painfully conscious of every move and the clarity can be overwhelming,” Cadence, 28, tells Bustle. “I saw this as a positive though, as I was crystal clear and knew who I liked and who I didn't." By the time Cadence was 28, she had never had sex for the first time with a new partner sober, or a sober first kiss with anyone she knew. She says she used alcohol to calm her nerves and, in the process, lived a cloudy dating and love life.

“There was so much anxiety swirling around inside about opening my heart to a new person and experience,” Cadence says. “I often would ponder going back to drinking just to make it easier to break this wall, but I realized this low vibrational self-talk would not serve me.”

Then Cadence met her current partner at a festival. To Cadence’s surprise, he was sober, too. The first time he asked if he could kiss her, Cadence was faced with something she had never experienced before with a new person: sober intimacy.

“I was shaking,” Cadence says. “I was so nervous and began to jump around and nervously laugh. He held space for me even in this completely nerve-wracking situation — a new person and sobriety — and told me it was OK.” Instead of pushing the issue, he offered to hold Cadence, telling her there was no rush. “My heart was able to relax and open up knowing that I could communicate these emotions with someone and that they understood,” Cadence says. “We kissed, and it wasn't the best in the world because I was legit shaking, but I realized I had just moved into a complete new space and growth.”

When it comes to sobriety, “growth” is a big part of it. “Being newly sober is about growth,” Randi Newton, an addiction and recovery assistant and contributor to The Temper who’s been sober for 10 years, tells Bustle. “We're living in a time where being sober is a lot more acceptable and 'cool' than it used to be.”

“If you're new to sobriety, enjoy these uncomfortable moments because they won't be forever”

Newton is also quick to point out that in addition to this growth, it’s important to realize there’s no shame in sobriety. It may feel like you’re living a different life, because you are in some ways, but those who really love you and care about you, won’t let it interfere with your relationships with them. It's also about realizing the future is going to be better off because the alcohol has been subtracted from every situation going forward.

“Knowing alcohol will never again be a factor in my life brings me the kind of peace I’ve not felt before,” Abigail, 31, tells Bustle. “I think that’s how I know I made the right decision. When others pry or focus on the why, it can bring us right back to those dark days. Sometimes we’re not in the mood to discuss at length why we don’t drink. Abstaining from alcohol isn’t an open invitation for others to ask whatever question they’d like.”

And, when you’re newly sober, the question will, undoubtedly, come up. From friends, to family, to new people you start talking to on a night out on the town, to be sober, while it may not be an invitation for questions in your mind, in the minds of others, well, that’s a different story. Because of this, it’s important to prepare yourself.

“[Being sober is] nothing to be ashamed of,” Newton says. “If any of your friends have issues about the status of your sobriety, then it’s time to re-evaluate your friends. Real friends aren’t going to have a problem with a decision you made for your mind and body.”

“The most important thing to remember is that no matter the reaction, people’s reactions are never about you; they’re about themselves and their own relationship to alcohol,” Holly Glenn Whitaker, founder and CEO of Tempest, an online sobriety school and author of the forthcoming book Quit Like A Woman, tells Bustle. “You don’t ever have to explain yourself. This is your choice, about your life, and you don’t owe explanations or need to make cases for your decisions. I’ve found that I’ve learned the most about myself, and grown my boundaries, from such conversations.”

Choosing to be sober — no matter the reasoning behind that decision — can feel a bit uncomfortable in the early days, weeks, and months. But, as Cadence points out, that uncomfortable feeling that might come with being sober can be worth it.

“If you're new to sobriety, enjoy these uncomfortable moments because they won't be forever,” Cadence says. “Dating without alcohol seemed incomprehensible, but with the right person to hold space, communicate, and love you even in your awkward growth moments is the jam. I have been able to blossom through these brand new experiences with a deeper sense of connection to myself and clarity with who I'd like to be spend moments in life with. I feel that with this new found transformation I'm better able to show up in all areas of my life.”

It's also important to know that you're not alone and you're still fun; no matter what the naysayers who don't accept your sobriety might say. But, as Whitaker points out, that's on them; not you. “Join us in the present,” Abigail says. “I promise we’re still fun.”

Being newly sober is a path that has its ups and downs, and bumps in the road. But staying the course the best you can, relishing in your growth, and knowing you're not alone are the first steps in your new life. A life, you just might find, is better than the one with alcohol.

Correction: A previous version of this article inaccurately represented Cadence's experience with sober sex. It has been updated.