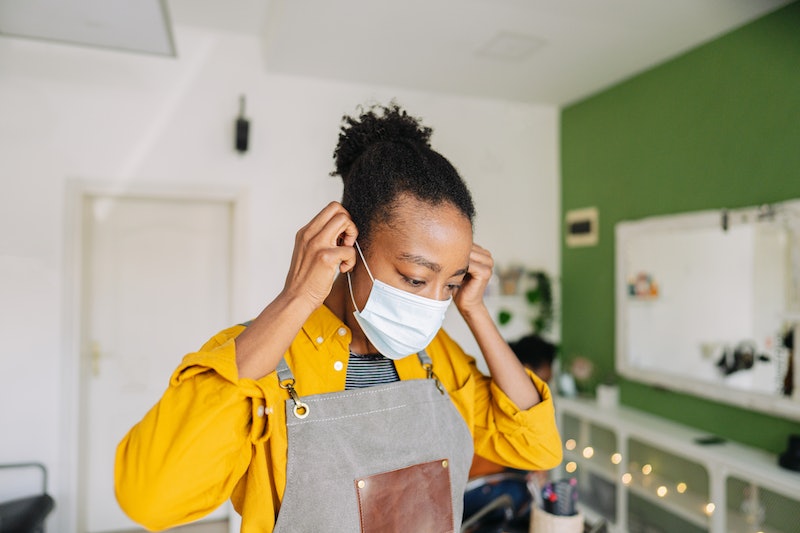 Since the #MeToo movement kickstarted a national conversation in 2017, awareness around sexual harassment has helped many people recognize inappropriate workplace behavior — and hold those responsible to account. Yet celebrities and politicians continue to be on the receiving end of allegations of sexual harassment. It’s not like powerful people don’t know what sexual harassment is. But being aware of how sexual harassment is defined can help survivors get the support they need.

How Do You Define Workplace Sexual Harassment?

John Winer, an attorney based in Los Angeles, who has given public lectures on sexual abuse and sexual harassment in the workplace, tells Bustle that the definition of workplace sexual harassment is often contingent on where it takes place. "[The definition] is different on a state-by-state basis," Winer says, "but the national standard is basically severe or pervasive conduct of a sexual nature."

Winer points to California and New York’s legal approaches to sexual harassment to illustrate the differences. In California, for example, state law demands that employers provide sexual harassment training but in New York, there's no specific law requiring such education. Nevertheless, all states are encouraged by the federal Equal Employment Opportunity Commission to educate employees on preventing sexual harassment in the workplace.

The Psychological Effects Of Sexual Harassment At Work

The gravity of sexual harassment can be understood on a psychological level. Debra Borys, PhD, a forensic psychologist based in Los Angeles, tells Bustle that one of the reasons why sexual harassment is so jarring to a survivor is that it feels like "betrayal."

"In the workplace," Borys explains, "an employee and employer have a fiduciary relationship, almost like a parental relationship or mentorship.” A fiduciary relationship is one between someone in a higher position who is entrusted with the well-being of someone in a less powerful position. "When a mentor takes advantage of someone under them," Borys says, "there is moral betrayal." The psychological effects of such violation of trust can lead to feeling heightened distress and anxiety, lack of productivity, or even physical illness.

It's worth remembering that sexual misconduct isn't confined to the workplace. Street harassment is a problem for millions of women in the United States. Around 85% women in the U. S. experience such harassment, according to 2015 research conducted by Cornell’s IRL school and non-profit organization Hollaback!

Holly Kearl, expert on gender-based violence and founder of Stop Street Harassment, tells Bustle that there are several differences between workplace sexual harassment and street harassment. One is the legal repercussions. Under the Title VII of the Civil Rights Act of 1964, sexual harassment in workplaces throughout the country is entirely illegal. "In public spaces, a lot of harassment is legal, unless it rises to the level of the threat of physical contact or is physical, or involves public masturbation or flashing," Kearl explains. Laws against street harassment change based on the state you're in, so Kearl recommends Stop Street Harassment's guide on knowing what is legal and what isn't.

One of the reasons why street harassment is so scary is because there isn't a clear figure of authority to turn to. "In public spaces," Kearl says, "if it happens on public transit you could report it to the transit authority. If it happens in a place like a restaurant or bar or store, you could try to report it to a manager or bouncer and otherwise. If it's illegal, you can try to report it to the police. But it's a lot less clear cut regarding who to report to and who will actually be equipped to help you."

Kearl says that most street harassment is a "one-time encounter" between the harasser and the harassed. "Harassers at work are usually known to you, as in you likely know their name and how to identify them if you want to report it. In public spaces, you generally don't know your harasser and may never see that person again. So it's a lot harder to be able to report or do anything about that particular incident," Kearl explains.

Sexual harassment — whether at work or on the street — is about power, experts say. Specifically, abuse of the power. "I think the term that covers them," Winer says, "is sexual abuse." A 2020 Pew Research Center study showed that 69% of women have experienced harassment in their workplaces, while separate research estimated that 75% fear backlash for reporting it.

In the face of such widespread abuse, what can be done to address it? Kearl emphasizes the need for informing people about street harassment as well as getting political figures involved. "We need a lot more education at a young age on issues of consent, gender, and harassment," Kearl says. "It would be great if these lessons were mandated in all schools. We need publicly offered sessions in every community on what harassment is and what to do if it happens to you or if you witness it happening."

On a broader scale, powerful entities like governments need to step up too, Kearl says. "Governments can run PSA campaigns about harassment and also train law enforcement to better know how to handle these kinds of cases (as well as sexual assault, which too often they handle with insensitivity)."

This article was originally published on Oct. 20, 2017