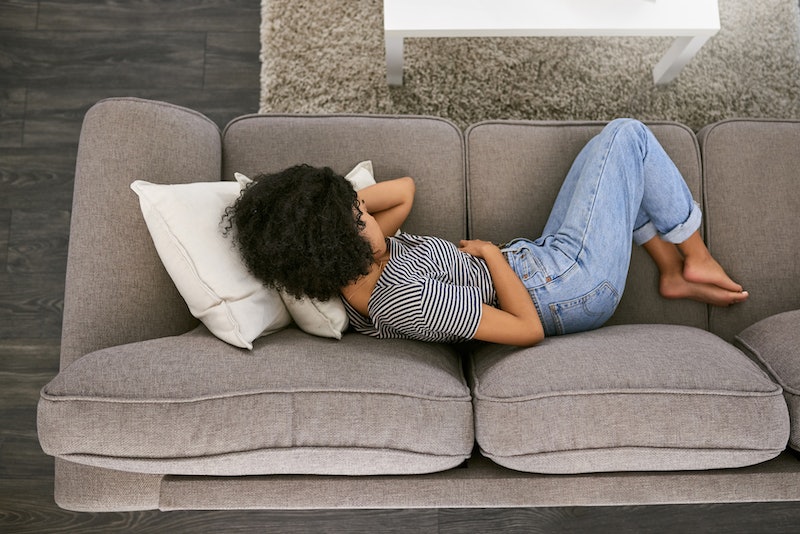 The one year anniversary of lockdown coincides with Endometriosis Awareness Month. Throughout March, campaigners have highlighted how clinic closures have affected people with endometriosis during the pandemic. Research conducted by the BBC found that it already takes an average of seven and a half years to be diagnosed with the condition. So, how has lockdown affected endometriosis diagnosis? A move to video consultations may have helped cut the spread of COVID-19 in doctors surgeries but it’s left many patients on waiting lists for surgical procedures and in the dark about their pain management and fertility treatment.

Endometriosis affects around 1.5 million people in the UK and the key side effect include chronic pain, nausea, and a struggle to conceive. There’s no cure for the condition currently and working alongside specialists is often the only ways for people with endometriosis to manage their symptoms.

Like many other aspects of endometriosis research, there are very few solid statistics around how COVID-19 has impacted treatment for the condition.

However, the University Oxford in partnership with Endometriosis UK and INSERM, Paris appear to be in the process of gathering data on this topic and, in October 2020, they revealed some of their findings.

They wrote that, during the pandemic, people living with chronic conditions “saw their treatments halted, cancelled or changed with very little warning, little information available and extremely limited access to clinicians.” Of the 2,000+ people they spoke to, 49.8% are most concerned with having their cancelled or postponed appointments reschedule once life returns to normal.

“On top of everything else, we don’t have our support networks, we don’t have our family and friends, we’ve lost a community of resources and connections,” says Lone Hummelshoj, Executive Director of the World Endometriosis Research Foundation, “You could argue that you could still get online or telephone support but it’s still not the same.”

Hummelshoj adds: “I think that waiting period leaves you feeling like you’re in limbo. There’s uncertainty with COVID-19 anyway, so it compounds what is already a difficult situation.

“We understand that there’s been enormous pressure on the NHS with COVID-19. But if you’re in horrendous constant pain or are awaiting fertility treatment and this has been put on hold to prioritise resources elsewhere, it has an enormous impact.”

Gabby first visited a doctor about the pain associated with her endometriosis five years ago, but was only transferred to a specialist in February 2020. This may seem like a long time but a report released by the All-Party Parliamentary Group found that 58% of people visited their GP more than 10 times before being diagnosed with endometriosis, 43% went to the hospital over five times, and 53% said they’d had to go to A&E.

“In February I had a breakthrough moment in my endometriosis journey. I was finally seeing an endometriosis specialist and felt like I was being listened to and understood,” she says, “Then the pandemic hit and my appointments had to be cut. I had scans booked in which were canceled and all my interactions with my doctor moved online.”

“I’d pinned all my hopes on my new doctor and I’ve attended some of my rebooked scans but I had some of my darkest days last summer. I felt like I’d been left alone.”

While Gabby was able to go back to her clinic in the winter of 2020, she said that she feels that the pandemic has pushed her journey backwards.

“If you don’t experience chronic pain then it’s difficult to understand how tiring it can be,” she says, “I’d pinned all my hopes on my new doctor and I’ve attended some of my rebooked scans but I had some of my darkest days last summer. I felt like I’d been left alone.”

Elle was officially diagnosed with endometriosis four years ago and has been trying for a baby with her partner for the last three years.

“This has been a long journey but the last twelve months may have been the most trying,” she tells me. “I’ve never been so aware that I’m creeping towards the end of my thirties, my doctors have told me that my options are becoming increasingly limited, and the fertility treatment I had booked in for June 2020 was put on hold. I understand why but I can’t get that year back of my life and when you feel like you’re running out of time, every year counts.”

“I’ve never been so aware that I’m creeping towards the end of my thirties ... and the fertility treatment I had booked in for June 2020 was put on hold. I understand why but ... when you feel like you’re running out of time, every year counts.”

After her treatment was put on hold for six months, Elle went back to her doctor’s for tests. “I’ve still had to manage my pain and deal with life during a pandemic. Adding the pressure of working out if I will ever have the family I’ve wanted for so long has been completely wearing,” she says.

What Has The NHS Said?

Speaking to ITV about the issue around endometriosis treatment and COVID-19, an NHS spokesperson said that there has been “significant increase in endometriosis care” since the Oxford findings were published in October 2020.

They added: “Any woman who thinks they are showing signs or symptoms should contact their GP for advice, treatment and referral for tests so that their symptoms can be treated as quickly as possible.”

If you would like to understand more about what treatment options are available for endometriosis in the UK, click here. Further endometriosis resources can be found here also.