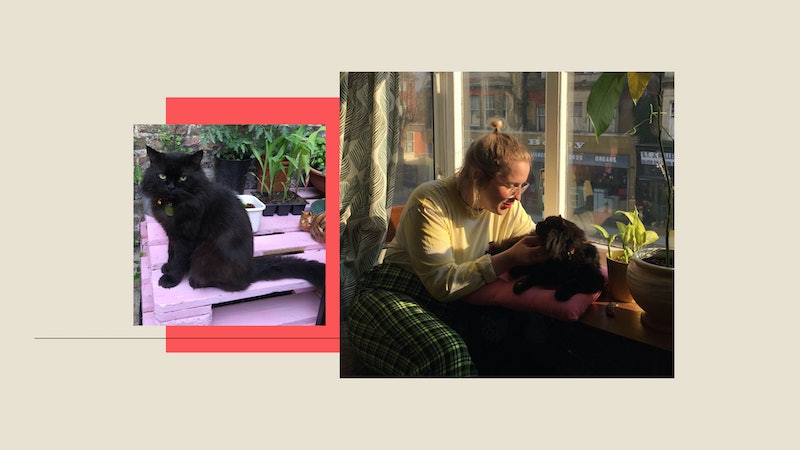 What I Learnt In Lockdown

Have you ever ripped up your carpet and underlay? There’s a whole magical, unseen world hidden beneath. Swirly and hodge-podge, like plasticky papier-mâché in salmon pink, and mine obscures some very beautiful (if dusty) hardwood floors. It doesn’t, sadly, hide the stench of cat piss; the removal of which was why I found myself peeling my carpet off the floor with little idea of how what to do with it afterwards.

As lockdown loomed and I, a solo dwelling singleton, found myself a whole country away from family, the petless panic began to peak. According to countless shelters, the coronavirus crisis saw an enormous surge in adoption enquiries and, after years of umming and ahing about becoming a pet mum, I decided this was one particular lockdown trend I was going to fully embrace.

I always thought myself a dog person, but when I actually started looking into adopting a pet of my own, something shifted. Sore from what felt like a decade of lousy heartbreaks and desperate to avoid any commitment whatsoever, I wanted an animal to simply co-exist with. One that didn’t much love me nor I it. A pet that could bring the stability of caring minus the risk of attachment. A cat would be perfect, I thought. Little did I know.

And so I began contacting shelters, only to learn very quickly that this process was going to be long and, at times, heartbreaking. It seemed like every shelter I spoke to was shut for business. Speaking to them felt like watching street lamps go out one by one. And even when I was finally approved to take a kitten home, it fell through last minute. I was all at sea.

Worse than that, I was already overloaded with cat things: a scratcher, a carrier, food, litter, the dreaded tray. I had kilos of cleaner for anticipated accidents and had watched hours of "How to Train a Cat to Come When Called." All that was missing was the creature itself.

But then it happened.

A call from a friend informing me that a shelter hundreds of miles away was still open set the plan in motion. One week later, my new fury friend was – and I’m not kidding – smuggled down from the North in the dead of night. Already named Lionel by the shelter, he was a black fluffball, bald around the ears from a recently resolved flea infestation; he’d been found quivering and alone in a Lincolnshire field. All I knew was that he was a stray aged 3 or 4 and he was very "chatty" — which, in vet speak, means he meows. Constantly.

So that brings us to the carpet. The first night was nothing but peeing and meowing. All I could think was, “What the eff have I done? Why is he so noisy? Can I send him back?”

Following the accident, he slept in the bathroom for the requisite (I learned after) couple of days while settling in. Nights were spent playing with him, brushing him, and giving him treats. My own bedtime was seldom pre-3 a.m., and I was up with the lark to make sure he could roam around his new palace.

His first time sleeping in my room was ruined by my neighbour’s snoring coming through the wall. But just before I got really annoyed, I realised it was Lionel. Yes, my cat snores and, when he ought to purr, he grunts like a hog. Concerned that either he was poorly or I’d accidentally adopted a fluffy pig, we took a trip to the vet, during which he was utterly silent. He merely blinked adorably at her as she assuaged my first-time parent hysteria. “He’s really cute,” she said smiling. I couldn't help but agree.

One of his teeth sticks out, he leaves hair all over the place (but also freaks out when I take out the vacuum), his toilet activities are repugnant but mercifully in the box, which I obsess over night and day. He ambles everywhere, constantly irritating my neighbours. Once, he jumped up a chimney and my friend had to pull him out by the tail while I — literally — fainted.

Despite all this, he is the best thing that’s ever happened to me. He never runs out of cuddles, lets me put hats on him (unusual, I believe, for a cat), has unwitting comedic genius, and always accompanies me when I go for a pee.

When my attempts at lockdown dating didn't go to plan, I was left bruised and weeping on the sofa, but Lionel's all-too-familiar post-poo victory lap (or, as the experts called it, poophoria) took me out of myself. The responsibility to clean up his mess was a clarion call, and it left little room for tears. Picking up the poo in the knowledge that I have a creature who was mine alone to love and care for was more comfort than I possibly could have anticipated.

And so, taking all this into account (plus my screensaver, personalised Lionel T-shirt, ever-depleting iPhone photo storage space, and ability to chew anyone’s ears off for hours about the beast), I think it's safe to say that I’m a bona fide cat lady now.

More like this
I Visited Remedy Place, The Social Club Transforming The Wellness Industry
By Rachel Lapidos
13 Weight Bench Exercises That'll Give You A Full-Body Workout
By Carolyn Steber
Here's How Long You Should Hold A Stretch
By Carolyn Steber
These Are The Best Supplements For Runners
By Carolyn Steber
Get The Very Best Of Bustle/UK